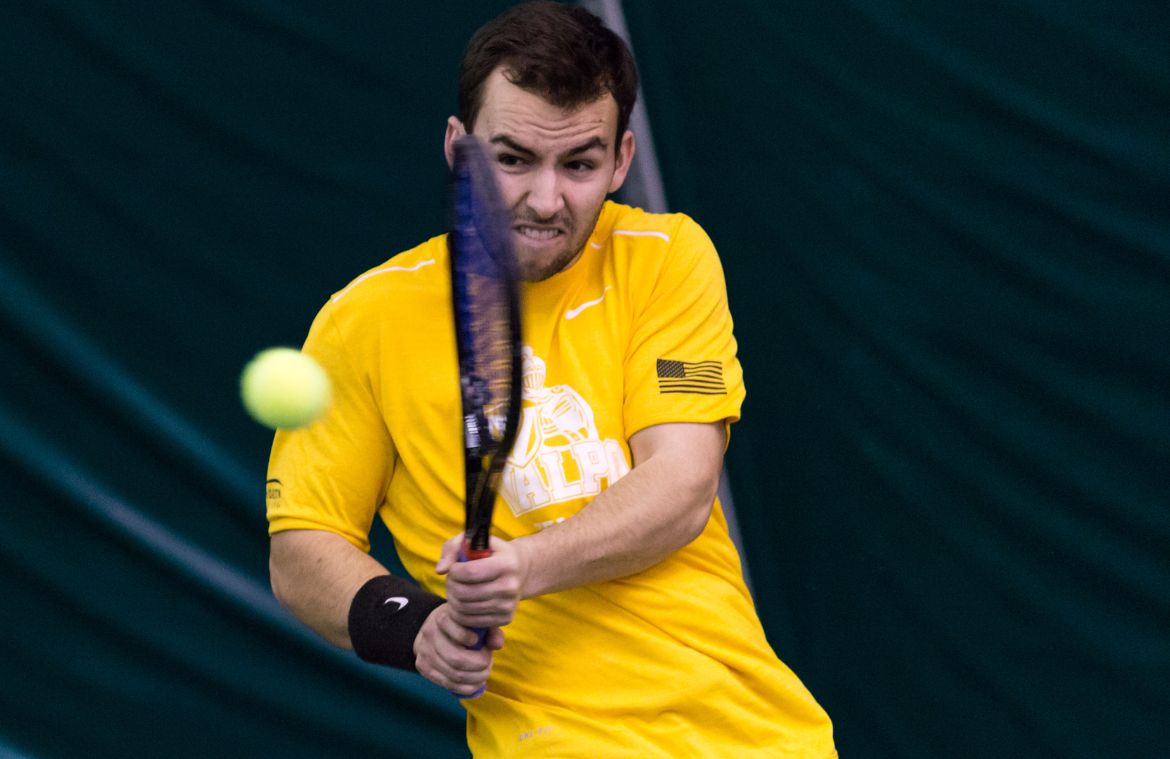 Crusaders Sweep Sunday Matches, Finish Unblemished Spring Trip
The Valparaiso University men’s tennis team completed a perfect week in Florida on Sunday by breezing past Liberty 6-1 and trouncing Fairleigh Dickinson 6-1 on the final day of competition in the Sunshine State. The Crusaders have now won 13 straight matches and stand at 14-1 overall.

How It Happened – Liberty

How It Happened – Fairleigh Dickinson

Next Up
The Crusaders return to the Midwest and have some time away from match action before returning to the court on Saturday, March 25 at Youngstown State. The Crusaders stand at 1-0 in Horizon League play after winning the league lidlifter over UIC last month. The match with the Penguins is slated to begin at 2 p.m. Central Time.

Crusaders Pick Up Pair of Sunday Victories
The Valparaiso University softball team closed out its 11-day, 10-game road trip with two wins on Sunday from the Leon Smith Classic in Oxford, Ala., avenging a loss earlier this year to Eastern Illinois with a 3-1 victory and finishing tournament play with a 5-2 win over Alabama State. Senior Sam Stewart (Frankfort, Ill./Lincoln-Way East) delivered her third multi-homer game of the season in the nightcap.

How It Happened – Eastern Illinois

How It Happened – Alabama State

Next Up
The Crusaders (10-4) will return home for a few days before taking on their final tournament challenge of the regular season, heading to Iowa City, Iowa for the Hawkeye Invitational. The tournament opens for Valpo on Friday, March 17 with games versus South Dakota State and Creighton.

Valpo Rally Not Enough as USF Walks Off with 14th Straight Win
A late comeback, strong middle relief work and multi-hit games from three players were not enough for the Valparaiso University baseball team on Sunday afternoon. The Crusaders rallied from down three to tie the game at five, but Joe Genord belted a walk-off home run in the bottom of the ninth to give USF a 6-5 victory and extend the Bulls’ winning streak to 14.

Next Up
The Crusaders will begin Horizon League play against defending league champion and preseason favorite Wright State on Friday. Game 1 of the three-game set in Dayton, Ohio will get underway at 5:30 p.m. CT. The game can be seen on ESPN3, WatchESPN and the ESPN app. In addition, David Horak and Brandon Vickrey will have the hometown radio call. Links to live video, audio and stats will be available on ValpoAthletics.com.

Crusaders Allow Five-Run Third, Fall to South Florida
A big third inning for South Florida doomed the Valparaiso University baseball team on Saturday evening at USF Baseball Stadium in Tampa, Fla. The Bulls tallied five runs in the third to snap a 1-1 tie, then held on for an eventual 8-1 win over the Crusaders.

Next Up
The Crusaders will round out the three-game series at South Florida on Sunday afternoon. The first pitch is slated for noon CT with links to live audio and stats available on ValpoAthletics.com.

Crusaders Drop Tight Match on Second Day in California
The Valparaiso University women’s tennis team continued its spring break trip on a picturesque day at the University of California Riverside on Saturday afternoon. The two teams played under cloudless blue skies with temperatures soaring into the 90s, a mountain backdrop, a light breeze and bright sunshine overhead. The final score was the only thing less than stellar on an otherwise perfect day in the Golden State as Valpo fell 5-2 in a tightly-contested match.

Next Up
The Crusaders will be back in the Midwest the next time they take the court as they visit Youngstown State for the Horizon League opener on Saturday, March 25 at 2 p.m. Central Time. The Penguins are the preseason favorite to win the league.

Crusaders Rally For Saturday Win Over Tennessee State
The Valparaiso University softball team earned its first win from behind this season on Saturday, scoring four unanswered runs to defeat Tennessee State, 4-2, in action from the Leon Smith Classic in Oxford, Ala.

Next Up
The Crusaders (8-4) close out action from Oxford with two more games on Sunday. Valpo will take on Eastern Illinois at 10:30 a.m. before facing Alabama State at 1 p.m.

Softball Splits On Opening Day At Leon Smith Classic
The Valparaiso University softball team earned a split of the day’s action thanks to the big bats of senior Sam Stewart (Frankfort, Ill./Lincoln-Way East) and sophomore Carly Trepanier (Manteno, Ill./Manteno) in the day’s finale in an 8-6 victory over SE Missouri State, as Trepanier delivered the game-winning hit in the seventh inning. The Crusaders dropped a 1-0 decision to a strong Belmont squad in the opener of the Leon Smith Classic from Oxford, Ala.

How It Happened – Belmont

How It Happened – SE Missouri State

Next Up
The Crusaders (7-4) continue play from Oxford on Saturday with a single game against Tennessee State at 1 p.m. Live stats will be available via ValpoAthletics.com.

Women’s Tennis Captures First Victory of Year
The Valparaiso University women’s tennis team entered the win column on Friday evening in Los Angeles. The Crusaders earned a thrilling 5-4 win over California Lutheran, busting out of an eight-match skid in the process.

Next Up
The Crusaders continue their spring trip on Saturday afternoon as they visit California-Riverside. The match is slated to begin at 1 p.m. CT.

Crusaders Can’t Cool Bulls on Friday
The Valparaiso University baseball team ran into a red-hot South Florida squad on Friday evening in Tampa as USF pulled away for an 11-2 victory. The Bulls improved to 13-1 and extended their best start in school history, while the Crusaders slipped to 6-6 on the year. Junior Chad Jacob cracked a two-run homer in the ninth that got Valpo on the board.

Next Up
The Crusaders will continue the three-game series at South Florida on Saturday evening. The first pitch is slated for 5:30 p.m. with links to live audio and stats available on ValpoAthletics.com.