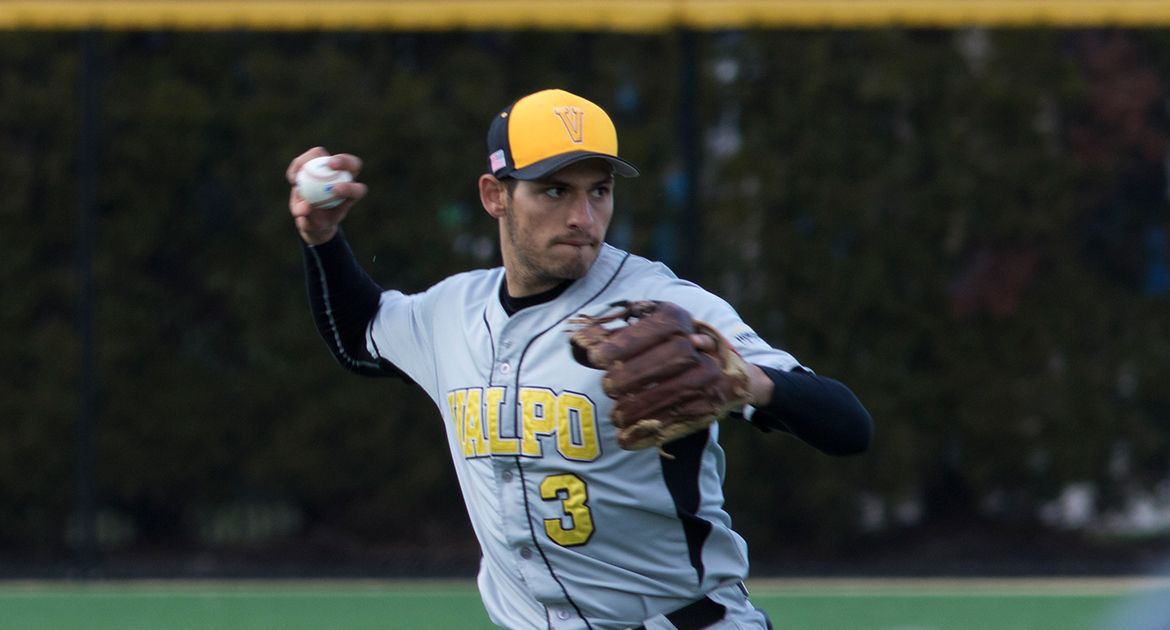 Stellar Pitching, Three-Run Ninth Lift Crusaders Over Quakers
Michael Mommersteeg may have been making his first collegiate start, but the freshman southpaw looked like a seasoned veteran on Tuesday afternoon at First Data Field, the Spring Training home of the New York Mets. The Crusaders posted a three-run ninth inning to snap a scoreless tie and held on to beat Pennsylvania 3-0 in Port St. Lucie, Fla.

Next Up
The Crusaders and Quakers will go at it again on Wednesday at 2 p.m. CT in Port St. Lucie, Fla. The game will be played on one of the Mets’ minor league spring training fields. A link to live stats will be available on ValpoAthletics.com.

Valpo Releases 2017 Football Schedule
The Valparaiso University football team has unveiled its 2017 schedule. The Crusaders will open the season with a trip to Montana on Sept. 2, before welcoming Duquesne for the home opener on Sept. 9.

Montana has had 30 winning seasons in the last 31 years. They missed the FCS playoffs last season for the first time since 2012 and third time since 1995. The Grizzlies are entering the third season under the direction of head coach Bob Stitt. They featured the fifth-best passing attack in the nation in 2016, racking up 327 yards per game and 34 touchdowns over 11 games.

The Crusaders will face Duquesne for the third time after also battling the Dukes in 2011 and 2012. Duquesne returns 14 starters from a team that went 8-3 and shared the Northeast Conference title.

The Crusaders play their third road game in a four-week span on Oct. 7 at Campbell, a team that will be playing its final season in the PFL before joining the Big South in 2018. Valpo hasn’t played Campbell since 2014, a 34-24 Valpo loss that snapped a three-game head-to-head winning streak.

Marist is also back on the schedule after a two-year hiatus. The Crusaders host the Red Foxes on Oct. 14. Marist finished last season 5-6, 5-3 in PFL play.

The Crusaders will enjoy a bye week on Oct. 21, before hosting Morehead State on Oct. 28. The Eagles and Crusaders have competed in thrillers each of the last three seasons, with Morehead State winning by seven points or fewer on all three occasions.

The Crusaders will look to repeat the success of their 42-39 victory over Jacksonville in the 2016 season finale when they visit the Dolphins on Nov. 4. Jacksonville finished 2016 at 5-5, 4-3 in PFL play.

The Hoosier Helmet will be back up for grabs on Nov. 11, as this year’s rivalry showdown between Valpo and Butler will occur in Indianapolis. The Crusaders close the season by hosting Dayton on Nov. 18.

Valpo will not play defending PFL champion San Diego this season, marking the first time since joining the league in 1993 that the Crusaders will not face off with the Toreros.

A day after corralling his 100th career doubles victory and a day before taking a crack at his 100th career singles win, Valpo senior Jeffrey Schorsch (Perrysburg, Ohio / Perrysburg) was named the Horizon League Player of the Week on Tuesday.

Schorsch went 2-0 at No. 1 singles and 3-0 in doubles to help Valpo to victories over Rollins College, Mount St. Mary’s and Grand Valley State to begin its spring break trip. Schorsch worked with three different doubles partners this week and won all three matches.

Schorsch has strung together nine straight singles wins to start the spring season. He stands at 15-5 overall.

The Crusaders have won nine consecutive matches and stand at 10-1 overall. They continue their Florida trip on Wednesday at 2 p.m. Central Time at St. Leo.