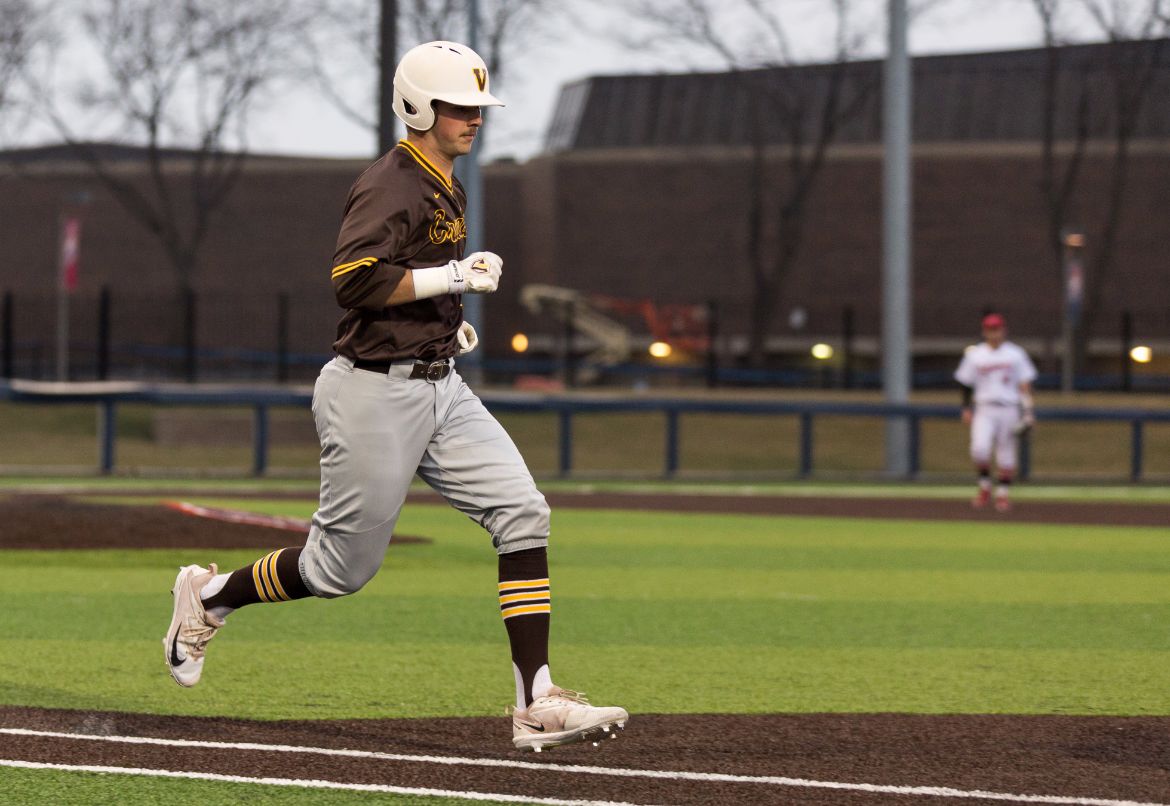 Hanson was one of 14 Horizon League players honored for their success both on the playing field and in the classroom. Hanson graduated from Valparaiso in 2016 with a 3.72 grade point average in sport management. He is currently enrolled in Valpo’s Master of Business Administration program and holds a 3.50 GPA.

The designated hitter / catcher has started 51 of Valpo’s 52 games as a fifth-year senior this season. He’s enjoying a productive offensive season with a .294 average, one home run, 30 RBIs and 14 doubles.

Crusaders Continue Winning Ways with Walk-off Walk
The Valparaiso University baseball team notched its fourth win in the last five games on Thursday afternoon at Emory G. Bauer Field. Freshman Christian Barczi (Naperville, Ill. / Naperville North) worked a bases-loaded walk in the bottom of the ninth to force in the winning run and send the Crusaders into celebration following a 5-4 victory over Milwaukee. All four Valpo base runners in the ninth came via walks, two of which were intentional.

Inside the Standings
After a 12-11 win over Oakland on Thursday, Northern Kentucky is on the brink of clinching the No. 3 seed in the Horizon League. The only other team with hope for the No. 3 seed is Valpo, and for that to happen the Crusaders would have to win both remaining games against Milwaukee and the Norse would have to lose both remaining games against Oakland. With the win on Thursday, the Crusaders have locked up no worse than fifth in the Horizon League. The only scenario where Valpo finishes fifth is Valpo losing both remaining games and Oakland winning both remaining games. Aside from the two aforementioned scenarios, any other combination of how the weekend could play out would result in Valpo finishing fourth. Elsewhere, Wright State defeated UIC 6-4 to stay alive for the No. 1 seed. The Flames need to salvage one win of the remaining two games to clinch the top seed and host the tournament.

Next Up
The Crusaders will continue the series against Milwaukee on Saturday at 1 p.m. CT at Emory G. Bauer Field. The game can be heard on 95.1 FM Valparaiso. Links to live audio and stats will be available on ValpoAthletics.com.

Stewart adds yet another honor to her plethora of awards following her standout senior season. The Horizon League Player of the Year, Stewart ended her final year hitting .388 with 15 home runs, 42 runs scored and 46 RBIs. She set new Valpo single-season records for home runs, walks (49), on-base percentage (.568) and slugging percentage (.836), and ended her Crusader career third in program history in career home runs and fourth in RBIs. Stewart, who led the Horizon League in seven different offensive categories, currently ranks fifth nationally in walks, sixth in on-base percentage and 13th in slugging percentage.

Trepanier picked up the All-Region award after starting every game at second base and serving as the Crusaders’ catalyst atop the lineup as a sophomore. Trepanier finished the season hitting .358 with 31 runs scored, nine doubles and 15 stolen bases. Her 62 total hits were second-most in the Horizon League and rank sixth on Valpo’s single-season chart. Trepanier, who earned All-League honors for the second straight season, also closed the year fourth in the league in stolen bases, fifth in batting average and sixth in on-base percentage (.431).

Both Stewart and Trepanier earned All-Region recognition from the NFCA for the first time, and are now eligible for All-American honors. This year is just the second time in Crusader program history that the team has had multiple players earn All-Region accolades.

To be eligible for the honor, students have to be an intercollegiate athlete, maintain at least a 3.2 grade point average, and be active on their campus and in the community.