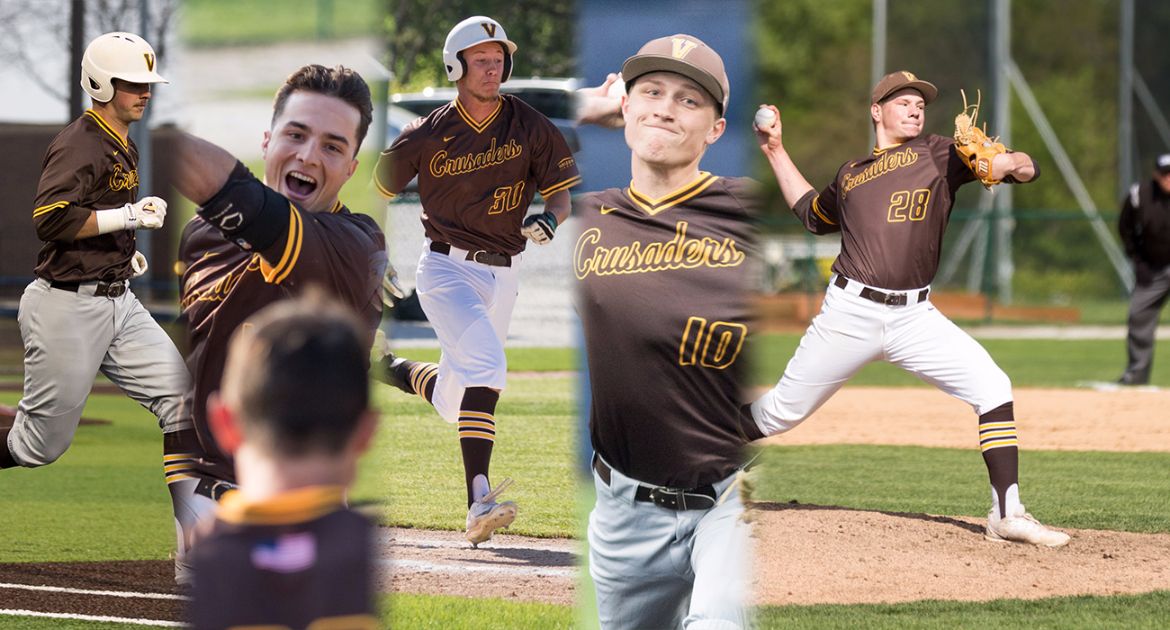 Stea has made a strong impact in his two seasons with the program after coming in as a junior college transfer. He ranks among the top stolen base threats in the Horizon League and is in the top five in program history for stolen bases in a single season this year. Despite playing only two seasons in a Valpo uniform, the senior ranks eighth in program history in career stolen bases. He hit a go-ahead grand slam against Oakland and homered in both games of a doubleheader sweep at Milwaukee. The California native was a member of the 2016 Horizon League All-Tournament Team, helping the Crusaders to an appearance in the championship game. He’s inserted his name into the Valpo record books this season by breaking the program record for hit by pitch in a single year. Stea hit .287 with seven home runs, 30 RBIs, a .420 OBP and 21 stolen bases during the regular season.

Hanson started his Crusader career by appearing in 14 games and made seven starts as a freshman for the 2013 Horizon League champion Crusaders, a team that beat Florida in the NCAA Regional. He made 40 starts in 2014 as the team’s catcher, then sat out 2015 with a medical redshirt. In his return to the diamond last season, Hanson hit .327 in 20 games. Now, he’s enjoying his most productive offensive season in a Crusader uniform as a fifth-year senior, shattering season career watermarks in a slew of offensive categories. Hanson hit .294 in the regular season with one home run and 30 RBIs. He compiled a .316 average over 28 Horizon League games.

Rhodehouse is one of five pitchers in the league with three or more saves in league play. The rookie righty picked up the win in his most recent outing, delivering four perfect innings out of the bullpen against UIC on May 14 to earn Horizon League Pitcher of the Week accolades. Rhodehouse finished the regular season with a team-best 2.51 ERA in 32 1/3 innings while racking up 39 strikeouts against 10 walks over 24 relief appearances.

Tieman (4-1) ranks sixth in the Horizon in league-only ERA at 2.80. Tieman’s 51 total strikeouts rank ninth in the league. Despite being moved into the starting rotation midway through the season, the Illinois native is third in the league with seven saves.

Barczi batted .343 in league play, the top average in Horizon League competition on the team. Overall, he’s hitting .290 with one home run and 14 RBIs.

The Crusaders begin the Horizon League Tournament on Wednesday at noon CT against Oakland in a single-elimination first-round game at UIC’s Granderson Stadium. Links to live video and stats can be found on ValpoAthletics.com.

Schorsch, Emhardt to Meet Texas A&M Duo in First Round of National Doubles Tournament
Valparaiso University men’s tennis seniors Jeffrey Schorsch (Perrysburg, Ohio / Perrysburg) and Charlie Emhardt (Carmel, Ind. / Carmel) may have already walked across the stage at Sunday’s graduation, but the most accomplished doubles players in school history have not yet finished writing the final chapter of their storied Crusader careers.

Schorsch and Emhardt will compete in the 2017 NCAA Division I Men’s Tennis Doubles Championships starting on Thursday in Athens, Ga. The two will face off with Texas A&M’s AJ Catanzarita and Arthur Rinderknech in the opening round. The start time for Thursday’s match is expected to be released on Tuesday afternoon.

If Schorsch and Emhardt can knock off the Texas A&M duo, they will advance to face the winner of a match between Mississippi’s Fabian Fallert and Grey Hamilton and Butler’s Mason Dragos and Mikheil Khmiadashvili in the second round. Either way, the Round 2 showdown would be rematch, as the Crusader combo defeated Fallert and Hamilton at the ITA Indoor Nationals in the fall, but lost to Dragos and Khmiadashvili in a dual match earlier this spring.

Schorsch and Emhardt compiled a 20-6 mark together during a season highlighted by an appearance in the ITA Indoor Nationals championship match this past fall. As a team, the Crusaders set a school record for victories by going 23-4 (7-0 Horizon) and won the Horizon League regular season and tournament titles for the second straight season.

The national doubles tournament will continue through the championship match on Monday, May 29.

Rain Thwarts Doubleheader Between Crusaders, Panthers
The Valparaiso University baseball team has announced the cancelation of Saturday’s doubleheader against Milwaukee.

The two teams attempted to play the middle game of the series on Friday, but it was pushed back to a Saturday double dip due to steady rain throughout the day. Rain started to fall heavily again on Saturday morning, and was projected to continue for the remainder of the day.

Per Horizon League rules, teams have a three-day window to play their scheduled series each weekend, so the games cannot be made up. The Crusaders finish the regular season 24-28 overall, 13-15 in league play. They are locked into the No. 4 seed for the Horizon League Tournament, which begins on Wednesday.

Even if Oakland falls to Northern Kentucky on Saturday, the Grizzlies would remain percentage points ahead of Milwaukee for the No. 5 seed. Therefore, the Crusaders will face Oakland in the first round of the Horizon League Tournament on Wednesday in the first game of the event. The first round is single elimination, so the loser will be eliminated while the winner advances to the four-team, double-elimination portion. The game will begin at either noon CT or 11 a.m. CT depending on which school hosts.

The site of the tournament will be determined by the outcome of Saturday’s regular season finale between UIC and Wright State. The winner will host the event. Check back to ValpoAthletics.com and follow @ValpoBaseball on twitter for updates leading into the league tournament.

Rain Prevents Friday Baseball at Emory G. Bauer
The Valparaiso University baseball team made every effort to play Friday’s scheduled game against Milwaukee, but Mother Nature had other plans. A relentless rain throughout the day rendered baseball impossible, causing the postponement of the game.

The game was scheduled for 1 p.m., but never got off the ground. After a lengthy delay in hopes the weather would suddenly clear up, the game was postponed.

The game will be made up on Saturday as part of a doubleheader slated to begin at noon CT at Emory G. Bauer Field. It’s senior day as Ellis Foreman, James Stea, Jake Hanson, Mario Losi and Nate Palace will be recognized before the game. Links to live audio and stats will be available on ValpoAthletics.com.