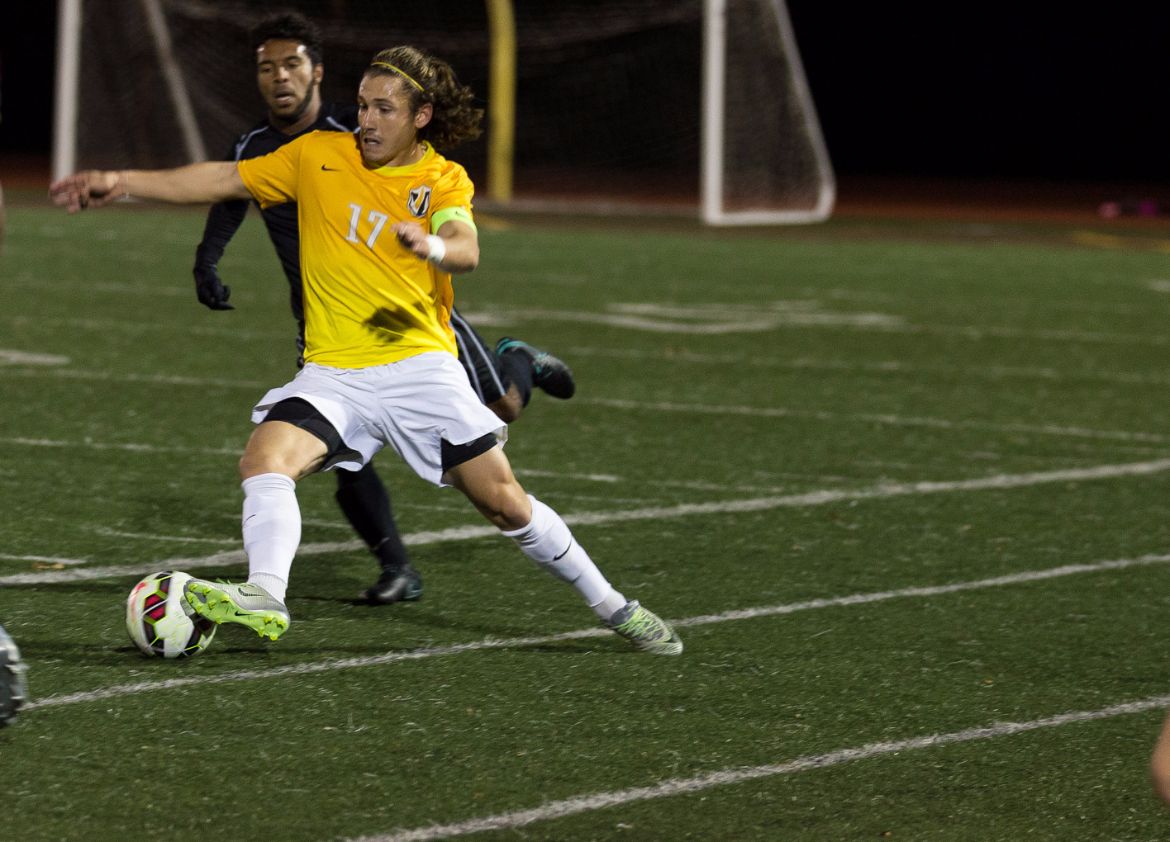 Valpo Plays to Scoreless Draw, Milwaukee Advances on Shootout
The Valparaiso University men’s soccer team saw its season come to an end on Monday night in Milwaukee, Wis. The Crusaders and Panthers played to a scoreless draw through 110 minutes, but Milwaukee converted on all five penalty kicks to take the shootout and advance to the Horizon League Tournament semifinals. This marks the second time in the last three years that the Valpo season has ended on a penalty kick shootout in the first round of the tournament.

Thoughts from Head Coach Mike Avery
“It's never easy to end a season this way, so we are all struggling a bit to make sense of everything right now, but I was very proud of the guys tonight. I thought we played very, very well. Milwaukee is a good team and it was a tight game that didn't have a lot of chances, but I thought we really looked like we were deserving of a bit more. We had a handful of good chances, including a ball cleared off the line that may have even crossed over into the goal before it was cleared, but at the end of the day soccer is very often a fickle game. All we can do now is hold our heads high, wish Milwaukee well in the next round, and celebrate what has been a tremendous season.

In all my years of coaching, I don't know that I have ever been around a team that I have enjoyed as much - and that's saying something as I have been a part of some really great teams. These are young men that have represented the very best of Valparaiso University. Selfless leaders on and off the field, committed to each other and to a common cause, it's no secret why they put together one of the best seasons in program history. This group of seniors will leave an amazing legacy, a strong culture, and the continued success of future teams will be in large part due to the example they've set. It's really been my honor to coach them.”

Mix of Newcomers, Returnees Creates Fresh Energy for Women’s Basketball
The reasons to be excited for this year’s Valparaiso University women’s basketball season started coming before the final horn sounded to end the 2015-2016 campaign.

When the Crusaders received contributions from up and down the roster in a 94-91 overtime upset of fourth-seeded Detroit in the first round of the Horizon League Tournament in March, the significance went beyond one basketball game.

For the Valpo players and staff, the victory represented a taste of what tournament success is like and shined a bright light on a program that has been in rebuilding mode in recent years.

The season ended, but the reasons for recharged optimism just kept coming. The Crusaders brought in a five-member freshmen class that features something they’ve lacked in recent years – size. Four of the five newcomers check in at six-foot or taller.

Tracey Dorow is back for her fifth season in charge, while Justin Rees enters his third year as an assistant coach and recruiting coordinator. The staff has added two members – former Big Ten assistant John Motherwell and former WNBA player and Liberty University standout Megan Leuzinger.

“The bottom line for Megan is that she works to develop relationships with each player and knows they’re all different,” Dorow said. “She’s really working to bring out the best in them. It’s nice to see her establish relationships so quickly. The players know how much she cares, they know how much she knows and they’re just looking at her like, ‘Please teach me.’ It’s a really cool thing to have a role model like Megan for these young women.”

Motherwell brings a well-traveled, veteran presence to the coaching staff. Most recently, he helped lead Minnesota to 43 victories over the last two seasons. In 2015, Motherwell helped Minnesota reach its first NCAA Tournament since 2009.

“He’s just excited about everything,” Dorow said. “It’s nice to see the new enthusiasm. Sometimes we as a coaching staff can get caught in the rut and frustration of losing, and Coach Mo doesn’t let us not see the bright side. It’s really exciting to see.”

The coaching staff is a microcosm for the team as a whole, as both combine quality returning members with exciting newcomers. Forward Dani Franklin remains a staple for the Crusaders, as she returns for her junior season after averaging 10.1 points per game a year ago and 13 ppg during her Horizon League Freshman of the Year campaign. For the first time in her Valpo career, Franklin is expected to be in the starting lineup on a regular basis.

“She’s been solid on both ends of the floor,” Dorow said. “She can score from anywhere and she is doing the little things. I’m excited for her to see what she can bring this season, knowing that she’ll get more minutes and she’s a veteran now.”

Hamlet is the team’s leading returning scorer after averaging 10.6 points per game last season. She is expected to be a member of the starting five again this year.

“Meredith has really worked hard to understand what the coaches want and she’s been one of the best communicators with me, so I know my message is being sent back to the sophomores and freshmen,” Dorow said. “There are nine of them, so it was essential that we have someone represent that big group of underclassmen. She emerged as the obvious choice, both on the court and off the court.”

Donchetz is expected to see increased playing time and could be one of the first players off the bench this season.

“Georgi is showing the signs of athleticism she showed before she hurt her knee in high school,” Dorow said. “She’s starting to be able to do everything she’s capable of doing. The biggest plus with her is that she’s a natural leader. We’re all excited for her.”

The Crusaders will also look to their two seniors for leadership – Imani Scott-Thompson and Haylee Thompson. Scott-Thompson continues to battle injury issues that don’t keep her off the court, but limit her playing time. Thompson missed the exhibition game against Indianapolis with concussion-like symptoms.

“Before Haylee went out, she was playing really well,” Dorow said. “She’s another vocal leader and a kid that’s been here for four years. Haylee does so many good things. She’s another anchor inside defensively. She gives us some speed and size and lots of athleticism.”

Sophomores Hamlet, Allison Schofield, Hannah Schaub and Amber Lindfors all return this season. Schaub is described as a “must have on the floor” type player for the Crusaders and will start at point guard. Lindfors, who is expected to get the nod at center, may be Valpo’s most improved player over the offseason.

“Amber has been a force every day in practice and we’re going to build her up and push her to her maximum potential,” Dorow said. “She’s doing big things for us on both ends of the floor and is wanting the ball on the offensive end. When you add a 6-foot-4 anchor to our team on both ends, it changes everything.”

Freshman Caitlin Morrison was in the starting five for the exhibition game against Indianapolis. She was second-team all-state a year ago after averaging 16.6 points and 7.1 rebounds per game at Glenbrook South High School.

The Crusaders are weighing the decision of whether or not to redshirt Marlee Profitt, who is coming off an ACL injury. Profitt had 17.1 points per game at Highland High School in Ohio before having her season cut short with an injury. She collected honorable mention all-state.

“She’s playing very well, but it’s a catch 22,” Dorow said. “If I play her now, I don’t get her a fifth year. We’re trying to figure that out right now and see how the rest of the team is doing before we make a decision. The other four freshmen are definitely going to get minutes, and they’ll all bring something different. We’re going to see one or two freshmen on the floor almost all the time.”

As the Crusaders prepare to embark on a new journey on Saturday at Stetson, they are excited to do so with this group.

“I feel like we’re much closer this year,” Lindfors said. “Everyone is buying in.”

“I would say it does feel different,” Franklin said. “Every year I’ve been here, we feel more like a team. This year, it feels like the best of all three.”

“Chemistry has improved year by year,” Dorow said. “The upperclassmen have tried to lead the right way and do the right things. This season seems different, for some reason. I can’t explain it, other than they want to play for each other. That’s exciting because when you are playing for each other, you play at a different level than when you’re doing it for yourself.”

This marks the first time Valpo has two first-team honorees in the same season since 2011 (Stefan Antonijevic and Kyle Zobeck) and just the second time the Crusaders have had two first-team all-conference players since 1998.

Thomas has reached academic all-league status back-to-back seasons. He was named to the CoSIDA Academic All-District First Team on Oct. 27. Thomas, a business management major with a 3.90 grade point average, is eligible for CoSIDA Academic All-American honors, which are scheduled to be announced on Nov. 18.

Madrid leads the team with 10 goals and 25 points this season. He is the first Valpo player to rack up 25 points in a single season since 1991 and the first player to reach double figures in goals scored since 2001.

Lawrence has been a steady presence on a consistent Valpo defense throughout the season. He also has chipped in two goals. Despite only playing in 11 games, Anderson ranks second on the team with eight goals including three game-winners. Graham is another key piece of Valpo’s defense, while Campbell has six shutouts, 51 saves and a 1.00 GAA on the year.

Pulinx starts his career on Valpo’s defense with an appearance on the league all-freshmen team, the same way Lawrence and Graham began their careers in 2013.

Madrid was a member of the all-league second team a year ago, while Lawrence achieved that distinction in 2014.

The Crusaders begin the Horizon League Tournament on Monday at 7 p.m. CT at Milwaukee. The match can be seen on ESPN3, Watch ESPN and the ESPN app. Links to live video and stats are available on ValpoAthletics.com.