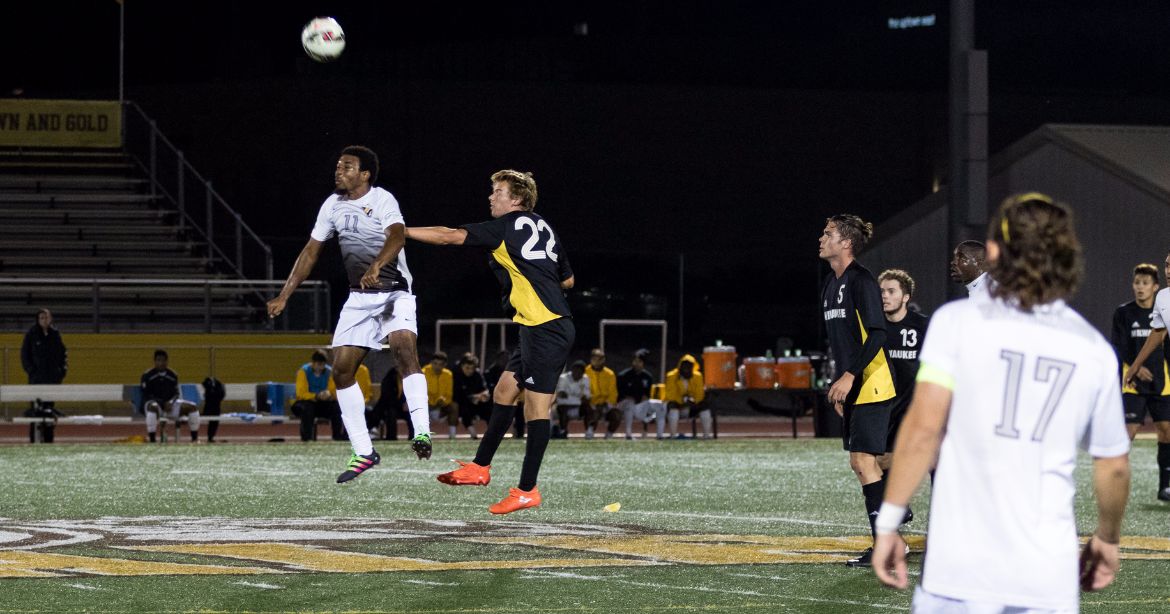 Men’s Soccer Suffers First League Loss in Green Bay
The Valparaiso University men’s soccer team saw its six-match unbeaten streak snapped on Saturday night with a 2-0 defeat at Green Bay. The Crusaders absorbed their first league loss of the season and suffered their first defeat since Sept. 21 at Ohio State.

Thoughts from Head Coach Mike Avery
“You have to give credit to Green Bay. They scored a wonderfully taken free kick with the wind at their back in the first half, and then did a good job managing the game. We never really found a rhythm, and they were able to keep the tempo out of the game through the second half when we had the wind at our backs. We were pushing at the end and they caught us on the counter to ice the game. They should feel good about the win because I thought they earned it fair and square. Really well done by them.

This is always a challenging trip. Green Bay's other league win this season was a home game against Wright State - the team I think is probably the best team in the league. We didn't handle the game well, again - in large part due to Green Bay's performance, but we aren't alone in having a tough time up here.

Our goal first and foremost is to qualify for the league tournament, then we can worry about how high a seed we can get. Our attention now turns to the week ahead with IPFW on Tuesday and then UIC next weekend. We've rebounded well to every setback so far, so I'm confident we will again. This is a proud group and they are well aware of the opportunity before them, even if tonight wasn't our best night out.”

Next Up
The Crusaders (7-3-3, 3-1-2) continue a stretch of four straight matches away from Brown Field on Tuesday night at IPFW. The match is scheduled to start at 5 p.m. CT, an hour earlier than the original start time. Links to live video and stats will be available on ValpoAthletics.com.

Men’s Tennis Team Dominates Crusader Invitational
The Valparaiso University men’s tennis team swept the singles competition with individual champions at A, B and C singles, and also won two of the three doubles brackets on the final day of the Crusader Invitational on Saturday.

Next Up
The Crusaders will be represented at the ITA Midwest Regional in Columbus, Ohio on Thursday. Then, Valpo rounds out the fall at the Illinois State Invitational from Oct. 28-30 in Normal, Ill.

Valpo Falls to YSU Saturday Evening
A goal in the 79th minute proved to be the difference Saturday night at Brown Field, as the Valparaiso University women’s soccer team dropped a 1-0 final in Horizon League play to Youngstown State.

Next Up
The Crusaders (7-8-0, 3-3-0 Horizon) make the short trip to Chicago on Wednesday evening to face UIC as the battle to make the Horizon League Championship takes shape. Kickoff is slated for 7 p.m.

Next Up
Both teams are back in action on Friday, Oct. 21 to host Evansville. The meet is slated to begin at 5 p.m. inside the ARC.

Crusaders Upend Hatters for Memorable Road Win
The Valparaiso University football team fended off a talented Stetson squad on Saturday afternoon in DeLand, Fla., pulling out an improbable 21-18 victory over the Hatters. The Crusaders had come close to notching signature upset victories on multiple occasions since Dave Cecchini took over as head coach, but this time they were able to hold on and seal the deal.

Next Up
The Crusaders (3-4, 2-2 PFL) have another long road trip ahead of them as they travel to San Diego (5-1, 4-0) to play the first-place Toreros next Saturday. The game is scheduled to kick off at 3 p.m. CT and can be heard on WVUR (95.1 FM Valparaiso). San Diego will have a live video stream available. Links for the live video, audio and stats will be available via ValpoAthletics.com.

How it Happened – Oracle ITA Masters

How it Happened – Crusader Invitational

Next Up
The Valparaiso Fall Invitational will continue with the final day of play on Saturday.