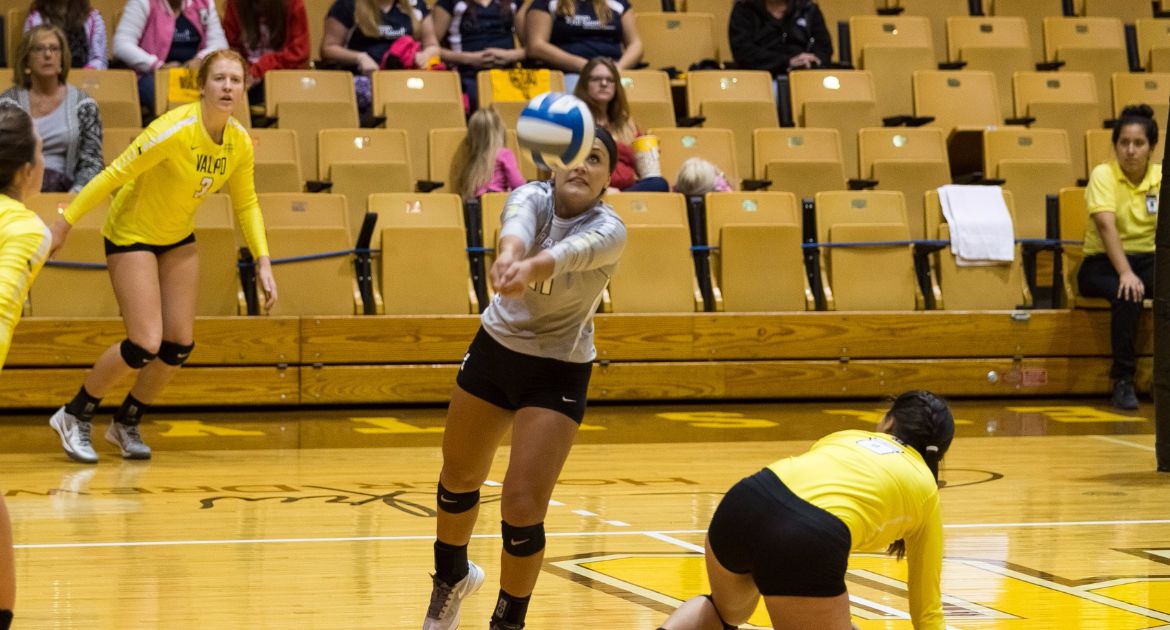 Volleyball Takes Down Fort Wayne Tuesday Night
The Valparaiso University volleyball team continued its strong play despite its out-of-system offensive system Tuesday night in its final non-league matchup of the year at Fort Wayne, downing the Mastodons by a 3-1 (25-14, 21-25, 28-26, 25-22) final.

Next Up
The Crusaders (12-15) make the trek to northeast Ohio this week, facing off first with Cleveland State Friday evening at 6 p.m. CT. The match can be seen live on ESPN3, WatchESPN and the ESPN app, with links for the live video and live stats available via ValpoAthletics.com.

Kim Leads Crusaders on Final Day of Fall Competition
The Valparaiso University women’s golf team rounded out its fall schedule with the second and final round of the Braun Intercollegiate at Oak Meadow Country Club in Evansville, Ind. on Tuesday. The Crusaders turned in a two-round team score of 636 to place fifth in the 10-team event.

Thoughts from Coach Josh Kalita
"We knew we had a good opportunity today but didn't take advantage of it. We got off to a poor start and didn't rally back - it's really difficult to apply any pressure on the leading teams if you don't get off on the right foot.

We were able to finish the round decently over the last few holes. Angie played her last four holes in one-under, Kylie made four solid pars in her last five and Katie had a solid back-nine.

The second round performances from Tiffany and Kayla were great to see. Both players were able to work out some of the kinks from round one and had our second and third lowest rounds for the day. Getting another tournament under their belt is valuable experience as they prepare for the spring season.

The ladies know they have the potential to compete in these events, so I think this will help push them forward."

Next Up
Tuesday marked the final day of the fall season. The Crusaders will return to the course on Friday, Feb. 10 at the Ball State Sunshine Invitational in Port St. Lucie, Fla.

Women’s Golf Third After One Round at Braun Intercollegiate
The Valparaiso University women’s golf team sits in third place of 10 teams at the Braun Intercollegiate in Evansville, Ind. with a team score of 312 after the event’s first round on Monday. Junior Katie Willenbrink (Mishawaka, Ind. / Penn) is Valpo’s top performer through one day of competition.

Quotes from Coach Josh Kalita
"Overall the ladies played pretty solidly today and we are pleased with our performance in the first round. We came ready to compete and put ourselves in a good position heading into the final round. You want to be 'in the hunt' playing in the final groups for the last round and we have that opportunity. The ladies prepared well over the past few days and have really been focusing on making the game simple - we are excited to give them a run tomorrow. If we focus on giving ourselves good looks and playing our own game that just might happen.

“Katie and Angie were great leaders for the team today. Katie didn't have her best stuff, but her ball was in play and her short game was solid which kept her card clean. That's the approach you have to have and it sets a good example for the other ladies. Angie was really consistent throughout the round which gave her the opportunity to make a lot of pars. Kylie also added a solid round; she did a good job of keeping it in play and fought to post another good score for the team."

Next Up
Round 2 of the Braun Intercollegiate will take place on Tuesday. It will be the final round of the fall season for the Crusaders.

Next Up
The final weekend of fall competition for the Crusaders will take place from Oct. 28-30. The Crusaders round out the fall slate by partaking in the Illinois State Invitational in Normal, Ill.

Next Up
The final weekend of fall competition for the Crusaders will take place from Oct. 28-30. The Crusaders round out the fall slate by partaking in the Illinois State Invitational in Normal, Ill.

Longoria Repeats As League Player of the Week
Valparaiso University senior libero Morganne Longoria (Burlington, Wis./Burlington) has repeated as the Horizon League Defensive Player of the Week after another strong week setting in addition to her back-row duties.

Longoria continued to function as Valpo’s primary setter while playing libero for the second consecutive week, averaging 5.55 digs and 5.09 assists per set over last week’s three matches as the Crusaders went 2-1. The senior posted 16 assists and 12 digs in Valpo’s sweep of Chicago State on Tuesday, and finished with 13 digs and 14 assists against Northern Kentucky on Saturday.

Friday’s five-set victory over Wright State was the highlight of the week, however. Longoria picked up a new career high with 36 digs, easily out-pacing her previous career best of 30, and found the time to hand out 26 assists as well – just two shy of her career high set the previous week. Longoria registered 11 digs and five assists in the fifth set as the Crusaders completed the crucial league win. Her 36 digs mark the fifth-most in a five-set match in Valpo history.

Longoria is the first Crusader player to earn league weekly honors in back-to-back weeks since Taylor Root did so in the first two weeks of the 2010 campaign.