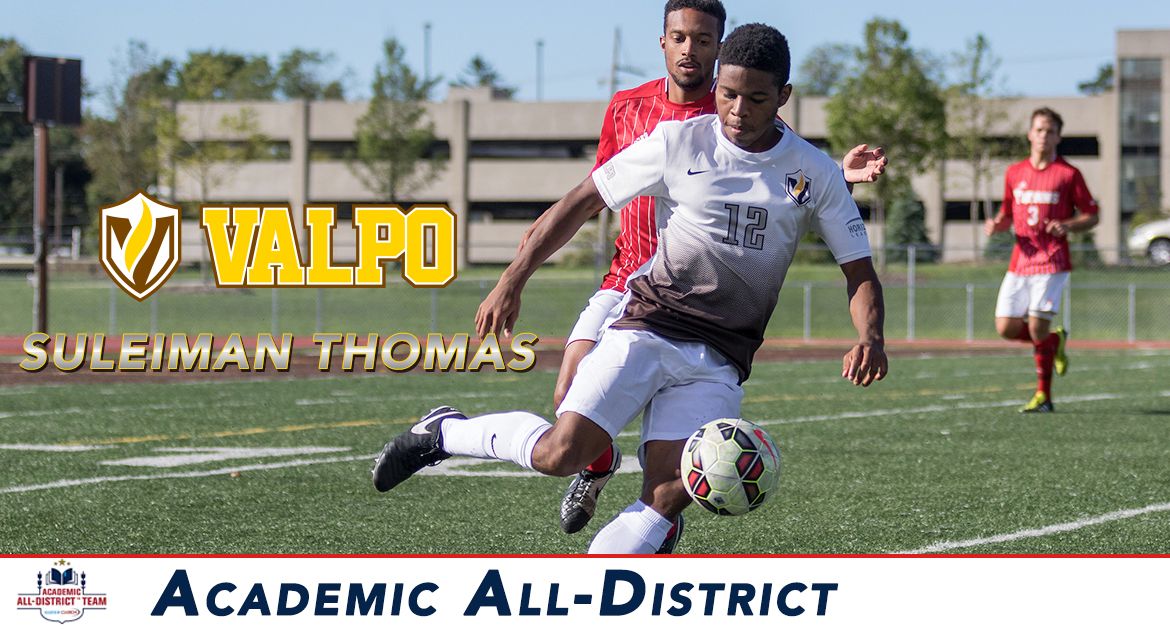 Now, Thomas is eligible for CoSIDA Academic All-American honors, which are scheduled to be announced on Friday, Nov. 18.

Thomas, a business management major, owns a 3.90 grade point average. He has helped the current Crusaders maintain a long-standing tradition of excellence in the classroom, as Valpo received the NSCAA Team Academic Award for the 14th straight year earlier this season, extending the third longest streak in the nation.

On the field, Thomas has enjoyed a successful Crusader career to date. He scored his first goal of 2016 and the third of his Valpo career against Eastern Illinois on Sept. 27. Thomas has established himself as a regular part of the Crusader starting lineup this season. He provided an assist in a come-from-behind 2-1 road win over Western Michigan on Oct. 11.

Thomas was also a member of the 2014 and 2015 Horizon League Academic Honor Roll.

The Academic All-District team recognizes the nation’s top student-athletes for their combined performances athletically and in the classroom. To be eligible, student-athletes must hold at least sophomore status, own a minimum grade point average of 3.30 and be either a starter or a key reserve.

The seniors have qualified for the USTA/ITA National Indoor Intercollegiate Championships as a result of being awarded an ITA Wild Card Selection. They are the first players in program history to qualify for the event.

The prestigious event, which will take place from Nov. 3-6 in Flushing, N.Y., will feature the top 20 doubles teams in the nation. After three years of knocking on the door for a qualifying spot, Schorsch and Emhardt reached the goal with Tuesday’s news.

As sophomores, Schorsch and Emhardt were semifinalists in the ITA Midwest Regional. As juniors, they went a step further by reaching the final match. They repeated as ITA Midwest Regional runners-up this season, dropping a thrilling three-set championship match to Michigan’s Jathan Malik and Kevin Wong on Monday in Columbus, Ohio.

“It means a lot to those two,” Valpo head coach Jim Daugherty said. “They were devastated after the loss, but they played very well and did everything they needed to do. It was one of the ultimate goals to reach the indoor national. They’re elated. They’re pumped, and so am I. I cherish this moment to be able to go with them and share this experience.”

Schorsch and Emhardt continue to set the school record for career doubles wins each time they notch a victory. The rest of the defending Horizon League champion Crusaders will close out their fall season this weekend at the Illinois State Invitational, which begins on Friday in Normal, Ill.