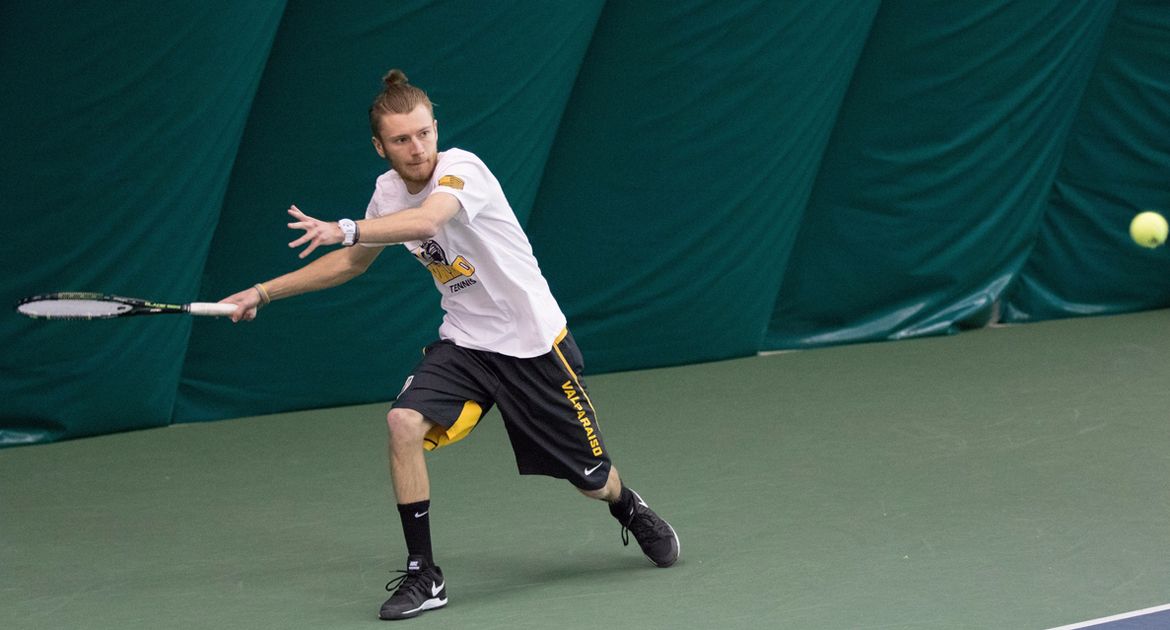 Men’s Tennis Splits Sunday Matches in Toledo
The Valparaiso University men’s tennis team rounded out a weekend of competition at the Rocket Invitational in Toledo, Ohio on Sunday. The Crusaders split a pair of tight matches, edging Duquesne 3-2 before falling to Western Michigan 3-2 in a battle of two defending conference champions.

How It Happened – Duquesne

How It Happened – Western Michigan

Next Up
The ITA Men’s All-American Championships, with select Crusaders participating, continues through Oct. 10. The Oracle/ITA Masters will be held in Malibu, Calif. from Oct. 13-16 with Jeffrey Schorsch slated to represent Valpo. The Crusader Indoor Invitational will take place at the Courts of NWI from Oct. 14-16.

Thoughts From Head Coach John Marovich
“It’s always big to get the full three points on the road in the Horizon League, especially with the light rain throughout tonight’s game. These conditions make it very stressful for defenders to be sure of their footing while dealing with attacking players, flighted balls and balls skipping on the surface. So I’m pleased with how our back line played tonight in posting a clean sheet.”

“I’m proud of our group being persistent in finding the goals in the second half and not losing their focus. Adi’s vision tonight was good and was rewarded, as she played a really nice diagonal ball into a seam at the end of Cory’s run. Cory was composed on the finish, which is always wonderful to see in those situations.”

“We created four crosses that went across the goal mouth in the first quarter hour, but didn’t connect. That could prove to be frustrating, but our focus tonight allowed us to persist and get the result.”

Thoughts from Head Coach Mike Avery
"It was an exciting game, filled with all the drama you'd expect when you're facing the two time defending champion of the league. Oakland has a very good team again this season, and deservedly they are a very proud team, so for anyone to knock them off is going to take a very determined effort. I thought our guys had great focus, held our defensive shape well and created enough chances to earn the win. It was a good performance and I am pleased that the good crowd that came out to help us support TOCO were treated to a Valpo win."

"The guys are very happy to occupy the top spot in the league, but they also know that if we don't back it up with another similar effort next weekend against Milwaukee, it will be a short stay at the top. We have a little side business to take care of first with a quick trip early Sunday morning to Omaha for a Monday night game at UNO, and in some ways having to jump right back into action is a good exercise for our focus. If we don't keep our feet right on the ground and pay attention to what's right in front of us, Omaha will make us pay. We saw last year that they are a very talented team, so we will certainly have our work cut out for us."

Next Up
The Crusaders (5-2-2, 3-0-1) step out of Horizon League play on Monday as they travel to Omaha to take on the Mavericks at 7 p.m. Links to live video and stats will be available on ValpoAthletics.com.

Next Up
The Crusaders (7-11, 1-3 Horizon) step out of league play Tuesday evening for a match at Western Illinois. First serve is slated for 6 p.m., with live stats available via ValpoAthletics.com.

Men’s Tennis Sustains Success in Toledo, Tulsa
The Valparaiso men’s tennis team downed host Toledo 4-1 in the Rocket Invitational on Saturday to improve to 3-0 on the weekend. In addition, three Valpo players participated in prequalifying at the ITA Men’s All-American Championships in Tulsa, Okla.

How It Happened – Toledo

Next Up
The Rocket Invitational continues on Sunday. The Crusaders face off with Duquesne at 8 a.m. Central Time, then round out the weekend against Western Michigan at 10 a.m.

Crusaders Drop Dramatic Game to Eagles
The Valparaiso University football team was on the verge of its third straight victory on Saturday, but Morehead State scored a go-ahead touchdown with 22 seconds remaining to secure a 29-26 victory over the Crusaders. The Eagles converted on third-and-goal from the 4 when Austin Gahafer found Jake Raymond for the game-winning score.

Thoughts from Head Coach Dave Cecchini
“It’s the same story as the last two years. We’ve been winning football games against these guys three straight years with under (three) minutes to play. That hurts when you can’t finish. Our defense played its tail off against an unbelievably talented quarterback. Our offense needed to win more of the one-on-one matchups.”

Next Up
The Crusaders (2-3, 1-1 PFL) return to Brown Field next week, when they will look to stay unbeaten at home as Drake (2-3, 1-1 PFL) comes to town. The game is slated to begin at 1 p.m. and can be seen live on ESPN3, WatchESPN and the ESPN app, and heard live on WVUR (95.1 FM, Valparaiso). Links for the live video and audio, as well as live stats, will be available via ValpoAthletics.com.

Next Up
The Crusaders return to competition in two weeks on Friday, Oct. 14 at the Bradley Classic.

Valpo Blasts Off to Strong Start at Rocket Invitational
The Valparaiso University men’s tennis team opened up the Rocket Invitational in Toledo, Ohio on Friday. The Crusaders started the day with a 5-0 victory over Detroit Mercy, then topped Niagara 4-1 in the evening session.

How It Happened – Detroit Mercy

How It Happened – Niagara

Next Up
The ITA All-American Championships crank up on Saturday in Tulsa, Okla. In Saturday’s pre-qualifying, Kissell faces Virginia Tech’s Jai Corbett, Emhardt is matched up with Columbia’s William Matheson and Bacalla will oppose Miami’s Max Andrews. The remainder of the team will continue action at Toledo and clash with the host Rockets on Saturday at 6 p.m.

Crusaders Fall in Five-Set Heartbreaker
The Valparaiso University volleyball team found itself two points away from victory in its Horizon League home opener Friday evening at the ARC versus Youngstown State, but the Penguins put together a run to claim the fourth set and then took control in the fifth set to deal the Crusaders a 3-2 (25-17, 16-25, 18-25, 25-23, 15-13) defeat.

Next Up
The Crusaders (7-10, 1-2 Horizon) return to action at the ARC Saturday afternoon as they host Cleveland State at 4 p.m. The match can be seen live on ESPN3, WatchESPN and the ESPN app, and heard live on WVUR (95.1 FM, Valparaiso). Links for the live video and audio, as well as live stats, will be available via ValpoAthletics.com.

Saturday’s match will also serve as the program’s TOCO fundraiser match, as they will collect donations throughout the night.