Taking the top three spots were the Vikings’ pack runners Taylor Bisacchi, Peyton Reed and Xavier Reed all seniors. X. Reed commented about the top three placements being held by Valpo stating, "Sometimes it's hard to stick in there; it's hard for everyone, but it makes us better as a team. On any given day when you aren't feeling your best your teammates are there to pick you up." X. Reed placed third with a time of 16:58.

Winning the race was Taylor Bisacchi with a time of 16:44. Sharing credit with his teammates, Bisacchi stated, "I wasn't planning on winning the race; I just planned on running with my team."

This pack strategy has proven to be successful for Valpo. Coach Prow talked about how he had asked the top guys to set the pace and most of all run together. 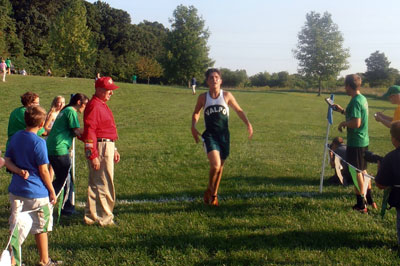 Prow said, "It feels great to start the season off with this win. These two teams always finish at the top of the Duneland Conference and for us to run so well against them this early in the season says a lot about all our training and our summer running. The guys really buy into our summer training program. It also shows how confident they are in each other. We asked our top guys to run together and set the pace and they went out there and did it.

Our strategy paid off. What we asked of our top guys, we also asked of our second pack of runners including [Jordan] Galligan, [Andrew] Lyp and [Patrick] Dalton. We asked them to stay right in there together and they did it."

With only a few Crown Point runners breaking the pack, Valpo claimed most of the top 20 spots.

Taking second and feeling good about implementing the strategy of the coaches, Peyton Reed said, "It's nice to know we made our coaches happy. We sacrificed for each other because it wasn't about the individual it was about the team." P. Reed's time 16:50.