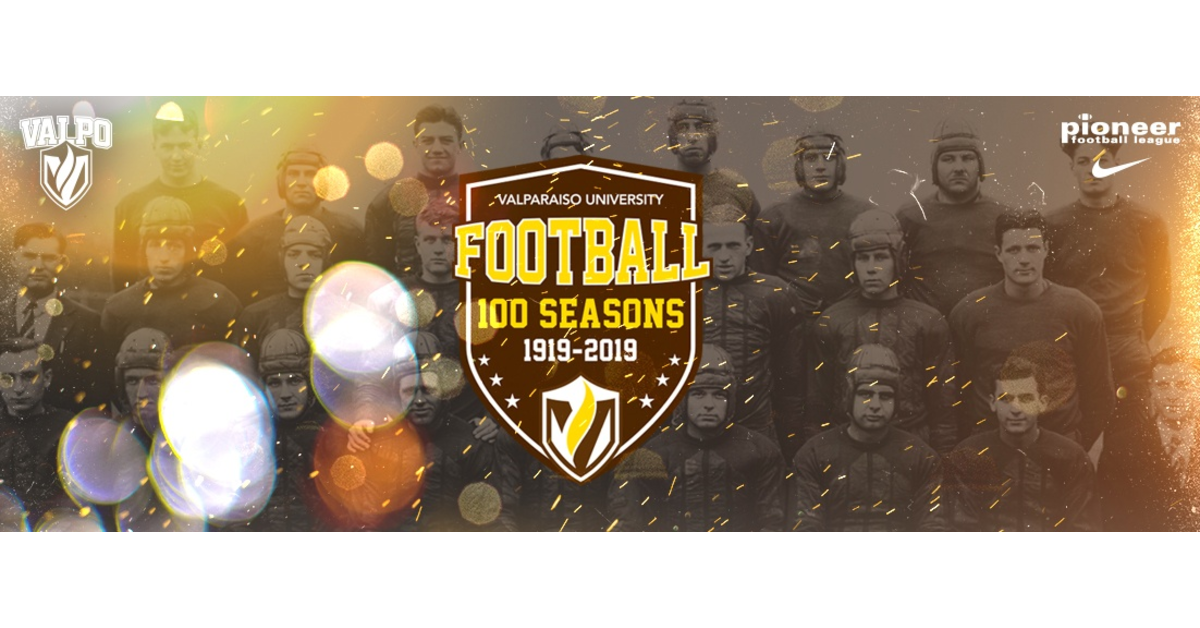 Valparaiso University (VU) Football is celebrating 100 years of history this season, marking the centennial occasion with different honors and festivities throughout the year.

It is a milestone year for the Crusader’s football program. With new leadership from head coach Landon Fox, the team launches a new era in a story that goes back to when pro football had barely gotten its feet on the ground.

Valpo kicked off the centennial celebrations at their September 14 home opener. They paid homage to the university’s first team, which earned a 5-3 record in 1919. The victorious season provided a strong foundation for the program, which went on to win 9 conference championships in the following century. 2019 also marks the 50th anniversary of the program’s 1969 championship run.

“I think there are a lot of people who don’t realize how significant and how deep the history of Valpo football goes,” said Brandon Vickrey, Assistant Director of Athletics for Media Relations for Valparaiso University. “This year presented the perfect opportunity at the perfect time, with the hiring of our new head coach Landon Fox, to usher in a new era of Valpo football while commemorating our past.”

Each home game will celebrate a different era of Valpo football. When the team takes on the University of Charleston on September 28, they will honor the most successful period on the program’s history, 1950-1975. These years saw the team bring home three championships— in 1964, 1968, and 1969— but also saw the development of two NFL players and Super Bowl champions in Garry Puetz and Fuzzy Thurston.

Thurston, who passed away in 2014, played in the NFL from 1958-1967. He was a key member of Vince Lombardi’s Green Bay Packers, a six-time NFL champion, five-time All-Pro, and earned rings in the first two Super Bowls ever held. Puetz played for various NFL teams from 1973-1982, including the Jets, Patriots, and finally the Redskins with whom he won Super Bowl XVII.

“Thurston and Puetz are going to be the first players in the history of our football program to have their jersey numbers retired,” Vickrey said. “It’s a significant honor, and it’s for two guys who are undoubtedly deserving. It’s pretty crazy that both players from Valpo who’ve gone on to play in the NFL have Super Bowl rings.”

When Puetz learned about the honor, he highlighted that the culture at Valpo was important for more than just the game.

“I have great memories of how Coach (Norm) Amundsen and Coach (Bill) Koch cared about us and taught us about football and life,” Puetz told the university. “The coaches’ compassion and guidance were instrumental in leading us through college, and I’ll never forget the friendships we made on the football field.”

100 years of history and lore is a lot to take on for Landon Fox, who had always had the goal of becoming a head football coach, but he is taking it in stride.

“It’s been a very humbling experience,” he said. “You get the opportunity to share your message, your core values, with the team and the coaching staff. It’s very important for me to link our team with those who came before us. It’s empowering to know that we’re not only representing ourselves, but 100 years of players who shared that experience not only on the football field but academically as well.”

To learn more about Valpo Football, their history, and the rest of the upcoming celebrations, visit www.valpoathletics.com/football/.