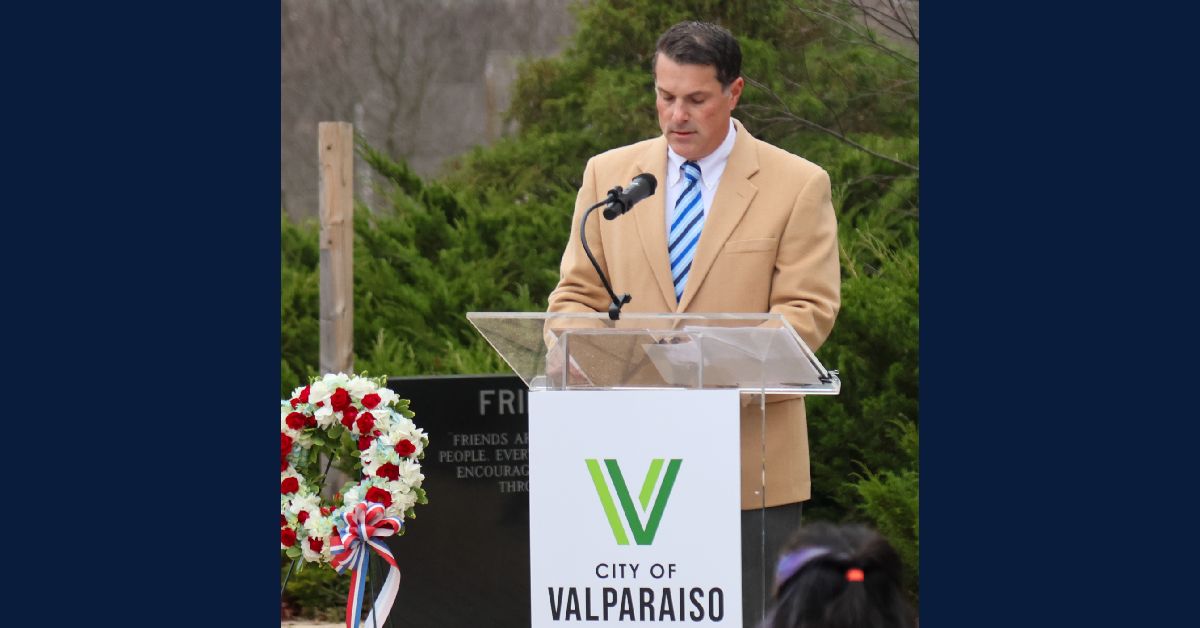 Valparaiso Parks and Recreation invited the Valparaiso community to honor its veterans early this morning at the Service Memorial in Foundation Meadows. The ceremony opened with the presentation of the Colors by the Valparaiso Police Department Honor Guard and featured speeches by Director of Valpo Parks John Seibert, Mayor of the City of Valparaiso Matt Murphy, and Air Force Veteran Aaron Treble. Additionally, three veterans read the names on the Service Memorial to honor those who had given everything.

“This is one of the great traditions we have in the city. I think it's one of the best Veterans Day events in Northwest Indiana,” said Murphy. “I was raised by a disabled veteran, so every Veterans Day in my house was a very important day. My dad instilled in us respect and thanks and reverence for those who served, both past and present.”

Murphy wasn’t alone in honoring veterans close to heart. Many attendees served themselves or else were close to someone who had served. Robert Hamarnick has been attending Valpo Parks’ veterans events since he moved to Valparaiso 10 years ago.

“My brother served in Vietnam, and my dad served twice in the Marines,” said Hamarnick. “I’m just grateful for all our veterans that are here today.”

Every year, Valpo Parks asks a veteran in the Valpo community to give a speech reflecting on their service and how it impacted their lives. This year’s speaker was Treble, who served as an avionics systems specialist in the US Air Force from 1990 to 1998.

“I grew up and became a man in the military,” said Treble. “I always wonder how other veterans feel when they're thanked for their service because it's usually an awkward moment for me. None of us served for recognition. I wouldn't trade my military years for anything. Those years made me who I am. It's odd to be thanked for doing something that gave me so much in return.”

Treble emphasized that part of the reason events like this are important is that it gives veterans a chance to connect with each other and the community they live in.

“Events like this recognize veterans: the sacrifices they've made, the things they've done in their lives, the experiences they've had,” said Treble. “A veteran is someone who, at one point in their life, wrote a blank check made payable to the United States of America for an amount up to and including their life. That kind of commitment takes a special person.”

Seibert is especially proud of Valpo Parks’ Veterans Day Ceremony because of what it stands for and how it comes to be every year.

“We've had speakers every year, and they're very consistent in their humility and their expressions of honor and their feeling of duty,” said Seibert. “It was their privilege to serve, where we feel privileged that they were willing to offer themselves, to give not only for people that they knew, their families and others, but putting their lives on the line for people they’ll never meet.”

Seibert beams with pride when he discusses how the Service Memorial came to be in Foundation Meadows and the effect it’s had on the community..

“The community came together to create this, and it was really a reflection of what the community is about,” said Seibert. “We think that was so important because it's just one of the unique aspects of Valparaiso philanthropy and volunteerism. We'll see parents with kids come over and ask what this is about, and then they have conversations as a family about what it means.”

To learn more about Valparaiso Parks and Recreation, visit its website at valpoparks.org.