The Valparaiso Department of Parks and Recreation is a team of staff and volunteers who come together to achieve the same goals: sustaining the city’s high quality of life through recreational activities, both indoor and outdoor. This team is does not sit anyone the bench, but instead welcomes "athletes" of all ages and fitness levels to join in the fun of Valpo Parks.

The Valpo Parks team focus on safety, fun, and state-of-the-art technology and upgraded programs for their players and letting the status of being a healthy community the main reward.

With those thoughts in mind, there are some exciting milestones on the horizon as well as Valpo Parks recently announced a five-year master plan for the city. With this plan the short and long-term goals of Valpo Parks will accomplish so much for the community’s members and improve areas throughout the city.

“We are in the midst of strategic panning for the next five years,” Parks Director John Seibert said.

Off-Leash Dog Park and Horticulture Enhancement
Located north of Valparaiso High School in what is known as the Clifford property a 14-acre space will be laid out for an off-leash, restricted dog park, operated in conjunction with Lakeshore PAWS. This area will be fenced and accessed with a key, given out to members whose animals pass requirements made for human and dog safety. This dog park will be located near the relocated Horticulture Center. With five acres, the Horticulture Center will have more and bigger greenhouse-construction ability, compost possibilities, and the space will be used as a satellite for public works, which can compost the picked up leaves, Seibert said.

The space will include parking, access to the pathway that runs through this area of town, restrooms, drinking water for both humans and dogs, and a possible dog washing station. Pet-friendly amenities will be chosen and regulated by Lakeshore PAWS. 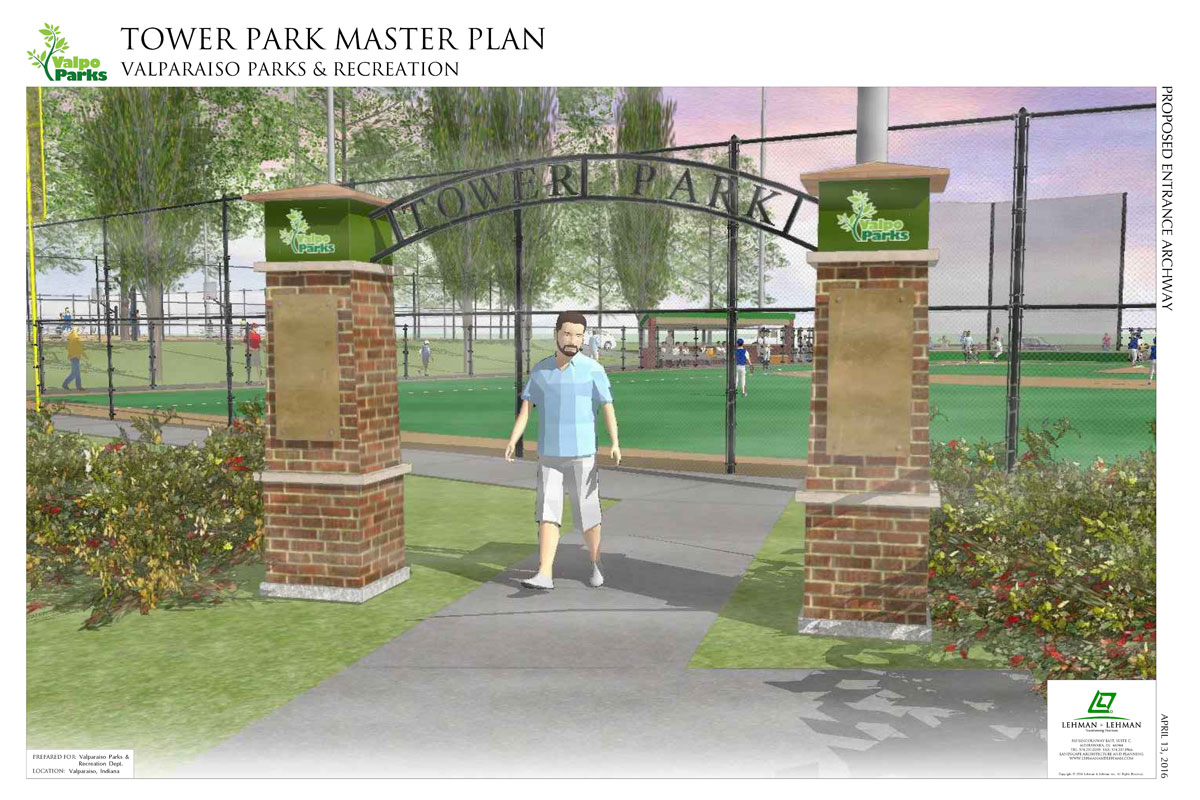 Tower Park
Nearly every kid played their first baseball or softball game at Tower Park on the small, very kid-constructed field. Well, get ready to play with the big dogs. Tower Park is being worked on by the department in collaboration with the Valpo Parks Foundation and it will funded through the Leaders Giving Back campaign. The courts and field are being dedicated to those who got their start in Valpo and are now making a name for themselves in their sport: Robbie Hummel, Bryce Drew, Rob Cavanaugh are just some of the well-known names honored in the courts, of which one will be a Purdue University and the other is a Valparaiso High School painted court. The field will be made of an artificial turf, so it is all-weather prepared and will be proclaimed a challenge field, in which children with special needs can play on it.

Donations from other leaders in the community are still being welcomed, Seibert said. Of the $700,000 project, $550,000 has been raised.

“We are looking for another $150,000, so over the next two months we hope to raise that by looking for people who are leaders in the community and asking them to be leader here in this project,” Seibert added. Names of donors will be engraved near the entrance of the fields in plaques.

Pathways
The concrete paths throughout the city are not just large sidewalks, but instead are part of the Valpo Pathway system. One goal of the parks department is to make this distinction more clear, by using more prominent branding techniques. They also want to expand the pathway to extend to more places and to connect some of the missing links. One path will extend to the Southern section of the city where it will connect to Center Township, which leads into the next round of Valpo Parks projects.

Center Township Partnership
In December 2016, the partnership between the city and the township was confirmed, creating a bonded Valpo and Center Township Park Board and setting off a long list of future ideas to better link these two entities together. As of now, people living within the Center Township’s borders are paying non-resident fees to enjoy the park’s amenities, which will no longer be the case. With the partnership, more residents will pay taxes to the Park Department, thus allowing them to start construction on projects. As of now, a new elementary school called Heavilin is being built, with an emphasis on having a larger gym. “One of the things we are looking at is building bigger gyms and facilities that will be open in the evenings and in the summer evenings for the community,” he said.

With the development in this area, creating more parks and other amenities, like the pathways, are some of the main priorities for the area. 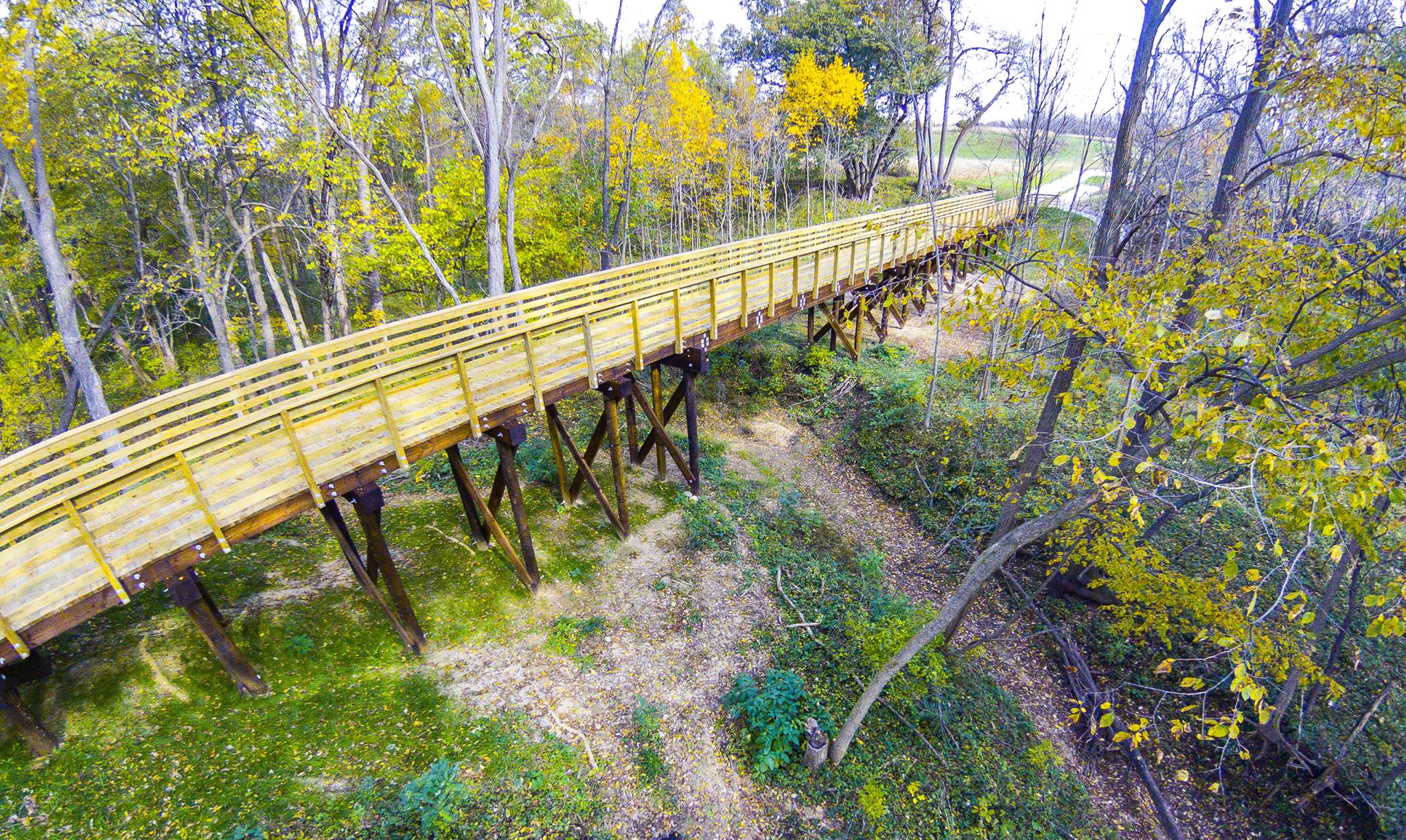 Other possible projects
The ideas are there floating around: a new youth sports complex with artificial turf and a dome ceiling would be great, a community pool with a retractable roof to close when the weather turns bad, and a new senior center are all possibilities on Valpo’s horizon. A new next-generation Skate Park is being talked about, as well as upgrades to all the current parks and other infrastructure.

These projects, undergoing and future, will only be successful with the help of the community through partnerships and donations from people who have a similar dream on how Valpo should look. Everyone claims technology is destroying the desire to play outdoors. However, these ideas listed above came from people in the community.

“It is not surprising that these people want to be outside,” Seibert claims. Yet, there is more to just being able to walk out your door and head downtown. These projects - the new schools, parks, community pool, and a senior center - are the amenities needed to keep those starting their families here in Northwest Indiana, and specifically Valparaiso.

“We are trying to make this a livable community and want people to stay. What we are seeing with the Plaza and the pathways is that’s what people want and we are seeing people 20-years and older people are coming back because we have the stuff they are looking for,” Seibert explained.

For more information on the programs and events from Valpo Parks, click here.