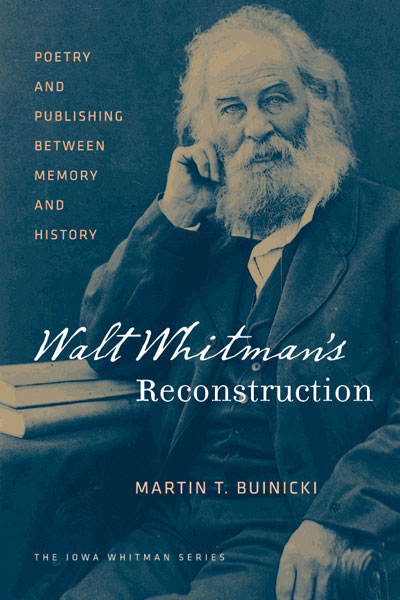 Released in January by the University of Iowa Press, Buinicki’s book discusses Whitman’s transformation during the Reconstruction era that followed the Civil War. “I wanted to look at the effect that the Civil War and its aftermath had on Whitman’s writing and his sense of himself during a time when the publishing world was changing, when Whitman was becoming the kind of national figure that he had always hoped he would be,” Buinicki said.

Buinicki’s book goes deeper into the development of Whitman than previous works have, and helps to shed light on the importance of Whitman’s writings following the Civil War.

“For a long time, critics tended to dismiss the majority of Whitman’s post-Civil War writing, judging it inferior to his earlier work,” Buinicki said. “I want to give readers a new way of understanding Whitman’s later writing by exploring how he uses it to make sense of the cataclysm of the war and to reimagine a unified nation and poetic vision in a time of significant political change.”

Buinicki is currently working on a new book on philanthropy and American culture, and expects that Whitman will tie into this project. He also recently started a blog at http://outsidereading.wordpress.com/ that continues to explore some of the subjects discussed in the book, among other topics.

For those interested in purchasing “Walt Whitman’s Reconstruction,” the book is available at the University of Iowa Press website at www.uiowapress.org/books/2011-fall/walt-whitman’s-reconstruction.htm , as well as through Amazon.com and all other major online book retailers.