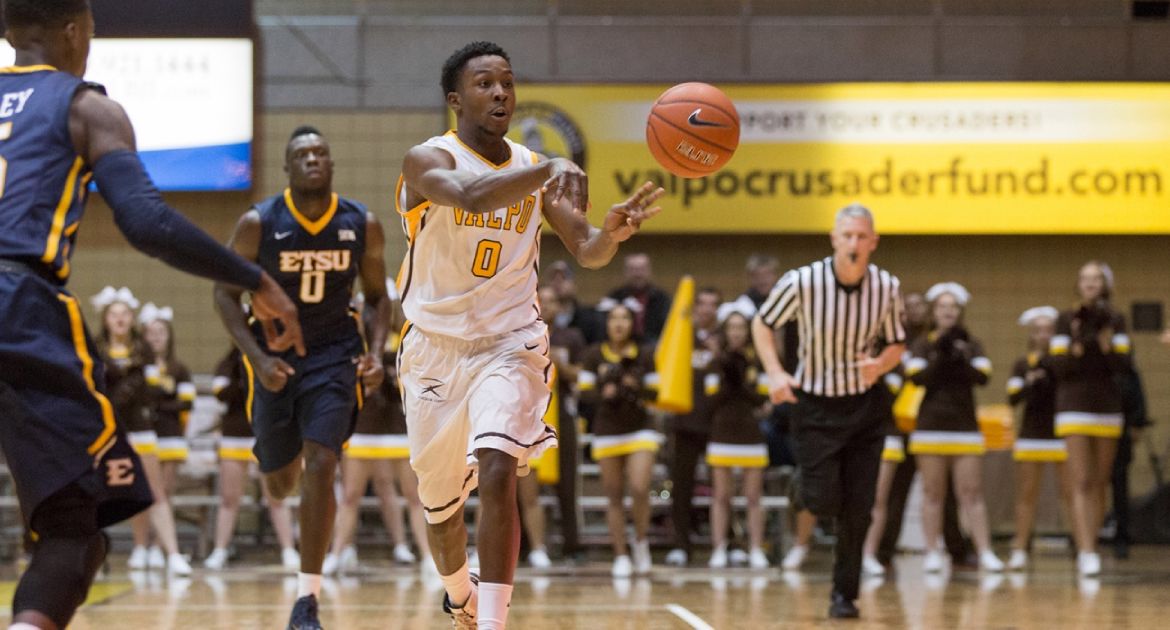 Next Up in Crusader Basketball: The Valparaiso men’s basketball team kicks off a stretch of three straight road games Saturday night, returning after a week off to travel to Dayton to face Wright State. The Crusaders have won three consecutive league games.

Last Time Out: A battle in an atmosphere that felt like March between Valparaiso and Cleveland State Saturday night at the ARC went right down to the wire, with the Crusaders eventually pulling out a 58-56 win over the Vikings to improve to 3-1 in Horizon League play. Alec Peters led the way with 24 points on 6-of-10 shooting, while Darien Walker added 10 points in the win, seven of which came in the second half.

Head Coach Bryce Drew: Bryce Drew (82-39) is in his fourth season at the helm of the Crusader men's basketball program in 2014-15. In his first three years, Drew led Valpo to 66 victories and postseason berths in each of his three seasons. The 2012 HL Coach of the Year, Drew ascended to the head coaching position on May 17, 2011 after spending six seasons as an assistant and associate head coach with the Crusaders.

Series Notes: Wright State owns a narrow 13-11 edge in the all-time series over Valpo, but the Crusaders have a 9-8 advantage since joining the Horizon League. However, in games played at Wright State, the Crusaders are just 4-8 all-time against the Raiders. WSU swept the season series from Valpo last season, downing the Crusaders 62-45 at the ARC and 67-58 in Dayton.

...notes from Cleveland State
The Crusaders improved to 3-0 this season in games decided by five points or less with the win over the Vikings.
Neither team led by more than seven points.
Alec Peters posted his ninth 20-plus point effort of the year, scoring 24 points and hit 5-of-7 from 3-point range.
The Crusaders matched a season high with 19 turnovers, but allowed CSU just 11 points off those miscues.
CSU shot just 36% for the game, the third straight game and 11th overall Valpo has held its opponent to sub-40% shooting.
Valpo won despite scoring less than one point per possession for the first time this season.
The Crusaders’ offensive efficiency (91.4) was its worst in a win since a 55-52 win at Milwaukee on Jan. 28, 2012.

...on the road
@ValpoBasketball is 3-2 in true road games so far this year and 8-2 overall away from home.
Valpo has flipped its luck away from home this year, after going just 5-9 on the road last season.
Under Bryce Drew, Valpo owns a 17-9 record on the road in #HLMBB play.

@WSURaiders
Wright State enters Saturday’s game at 10-8 overall and 2-2 in #HLMBB play after falling at home to Cleveland State on Wednesday.
The Raiders own a 5-2 record at the Nutter Center this season.
Junior JT Yoho leads Wright State, averaging 16.1 points and 6.7 rebounds per game.
Junior college transfer Joe Thomasson adds 10.6 ppg as well.

Up to 16 Wins
@ValpoBasketball reached 16 wins on the year with the win against Cleveland State last Saturday.
Valpo was one of the first two teams in the nation (Gonzaga) to reach the 16-win mark.
The Crusaders are one of just eight programs nationally with 16 victories as of the end of play on Wednesday.
This year’s Valpo team has reached every win from 10 through 16 earlier in the calendar than any other team in program history.
The 2007-08 squad earned its 10th win on Dec. 15, the only other team in program history to hit 10 wins before Christmas.

Hitting the Glass
Valpo has out-rebounded opponents by double figures nine times on the year, doing so most recently against YSU (58-38).
The +20 margin was the Crusaders’ best against a D-I opponent since a +22 advantage on the glass last year against Saint Louis.
By contrast, the Crusaders have only been outrebounded on two occasions losses to New Mexico and Missouri.
Last time out, the Crusaders held a +2 edge (31-29) on the glass over CSU, maintaining their #HLMBB best rebounding margin (+8.3).
Valpo leads the league in rebounding margin by more than four boards, and also paces the circuit in both offensive and defensive rebounding percentage.

Taking Care of the Ball
Despite the 19 turnovers last time out, the Crusaders are enjoying one of their best seasons in recent history handling the basketball.
Four times in the last eight games, Valpo has committed eight or fewer turnovers.
After committing 16.2 turnovers/game over the season’s first five games, the Crusaders have committed just 11.3 turnovers/game since.
Valpo ranks 79th nationally in turnover percentage this year after ranking tenth from last in the nation in the category last season.

Vashil and His Block Party
Senior Vashil Fernandez continued his strong season defensively last time out with a pair of blocks last time out against CSU.
Fernandez moved into second in Crusader history for career blocks with his fourth block against UIC and now has 130 career blocks.
Fernandez tallied a Crusader single-game record eight blocked shots earlier this season against Goshen.
Fernandez is averaging 3.1 blocks/game this year, leading the Horizon League and ranking 12th nationally.
Fernandez has totaled 58 blocks this season, already tied for fourth in a single season in program history with his own mark from last year.
Fernandez has seen his blocks per 40 minutes rise from 3.5 last year to 5.3 this year, while his fouls per 40 has dropped from 6.2 to 4.4.
Led by Fernandez, the Crusaders are averaging 5.1 bpg this year, right on their record-setting 5.1 bpg pace from last season.

Going Advanced
Valpo’s offense has averaged at least a point per possession in all but four games this year the three losses, and the CSU win.
Defensively, the Crusaders have surrendered less than a point per possession in all but three games.
Alec Peters ranks fourth nationally in Offensive Rating among players who use at least 24% of their team’s possessions.
Vashil Fernandez currently sits sixth nationally in block percentage.