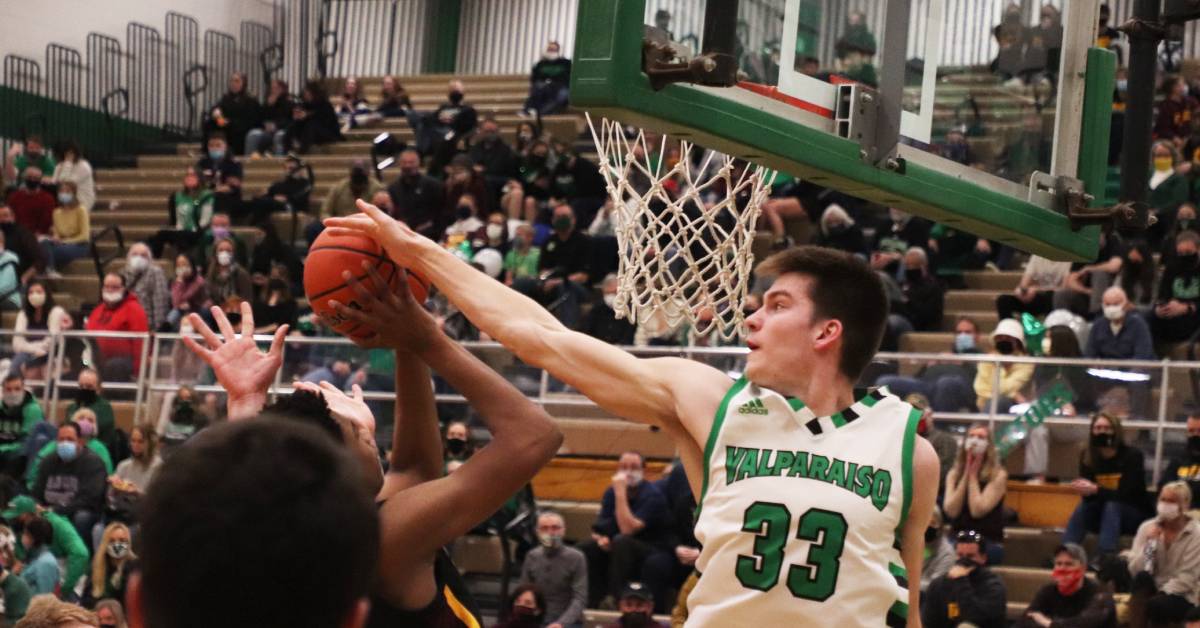 The rivalry matchup between Valparaiso High School and Chesterton High School is always a tightly contested game regardless of sport. The Vikings jumped out early in the first quarter and never relinquished the lead. Senior #2 Colton Jones led the Vikings in scoring with 12 points. The Vikings dominated in every aspect of the game as they claimed the Duneland Athletic Conference title with a final score of 49-27.

For the first time in what seems like an eternity, fans gathered in the field house to cheer for both teams. The roars of dozens of Valparaiso High School students filled the stadium as the Vikings scored each point on their path to the conference title.

The fans’ presence in the stands was a welcome surprise after a season of empty stands and quiet play. The noise of fans laughing, yelling, and enjoying the love of the game was something that has been missing since the COVID-19 pandemic began last year.

The Vikings went on a 6-0 run to start the second quarter, with the Vikings crashing the defensive boards. The Trojans were unable to get a steady scoring effort going, with the Vikings smothering the Trojans’ shooters every step of the way. #33 Mason and #50 Cooper Jones swarmed the basket whenever the Trojans had a shooter approach the basket. The hard-fought effort on both sides of the court paved Valparaiso's path to victory.

Chesterton was led in scoring by junior point guard Travis Grayson led the Trojans with 13 points. The game was a hard-fought, physical game of inches. Unfortunately for the Trojans, Valpo’s offensive efficiency proved too much to overcome.

As the final buzzer sounded, the field house erupted in a symphony of cheers from the Valpo home-crowd. The players waived and thanked their fans for their support. As this season began without a crowd, it is only fitting that the Vikings won the DAC title surrounded by their loyal fans.