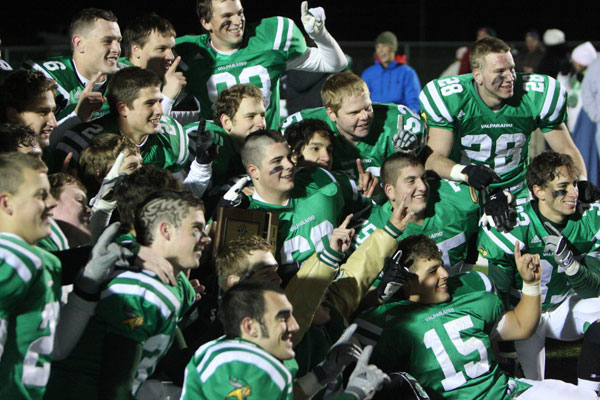 The Valparaiso High School football team came away as Sectional Champions on Friday night as the Vikings battled the Crown Point Bulldogs to a 16-6 victory at Viking Field.

The first score for Valpo came on a Sam Ficken field goal to put the Vikings up 3-0. Valpo didn’t score the rest of the first half, falling behind 6-3 after the Bulldogs were able to muster two field goals against the staunch Vikings defense, which seemed to come up with the big tackle nearly every time it was needed.

The Vikings overcame a relatively slow running game with a few big plays and put together a deep Paul Andrie-to-Dan Hummel touchdown on a deep post play. After a few more big defensive stops, Valpo ran a WR-reverse-pass from Jerrick Suiter to Adam Thoma to put Valpo on the goal line with under two minutes left. A Paul Andrie QB-sneak was all that was needed to put Valpo up 16-6, and Crown Point had no time left to even try to mount a two-score comeback .

Congrats to the Vikings, who come away the IHSAA 5A Sectional 1 Champions, but who also face a tough opponent in the 11-0 Mishawaka Cavemen, the only other undefeated 5A team in the state of Indiana. The game will be played at Valparaiso High School, and tickets will go on sale starting Monday Wednesday at the VHS Athletic Office.

Update: Tickets will go on sale starting Wednesday. Apologies for any inconvenience.

Click here for video highlights from the game as well!