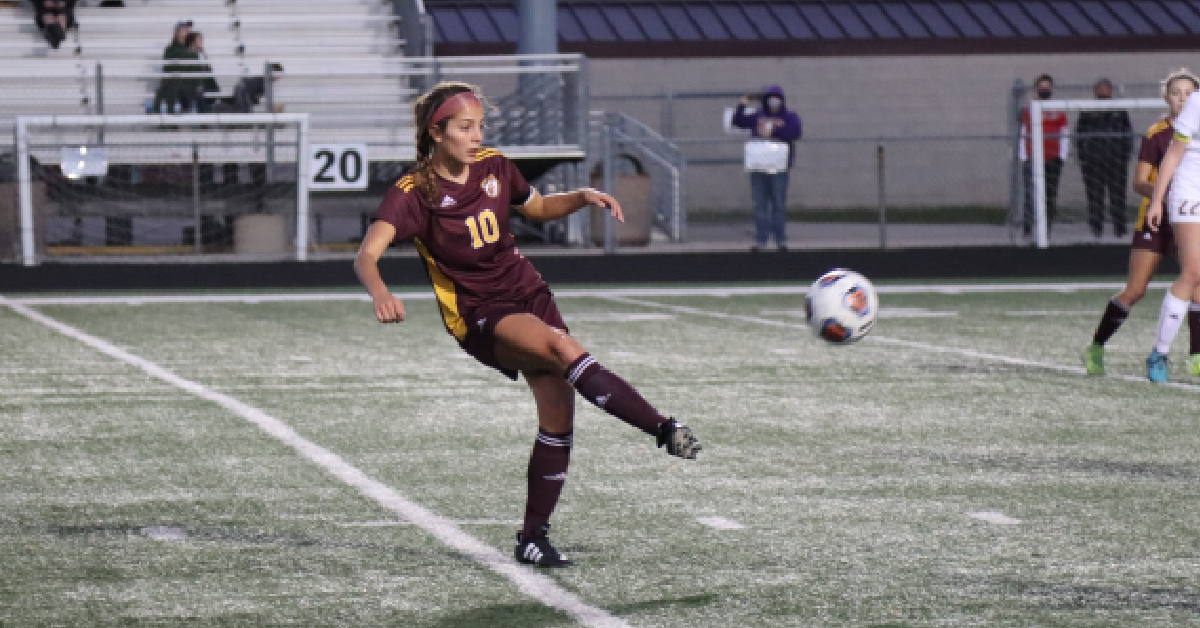 Valpo women’s soccer head coach John Marovich announced today that the program has inked eight student-athletes to NLIs to join the program as freshmen for the 2021-22 academic year.

“My staff and I are extremely excited about this group of players,” Marovich said. “They'll continue to grow the depth and versatility of our roster in the Missouri Valley Conference. Each player brings a specific attribute that fits into our game model, which provides flexibility to affect the game in different ways to disrupt our opponents. During this unique year, I am so proud of this class for their spirit, energy and passion as they faced the uncertainty of the pandemic. I witnessed their character in action and we can't wait for them to join us on campus in the fall of 2021.”

Bonnici started the last three years at center back for the Greyhounds, helping lead them to a Class 3A state championship in 2018 and a state runner-up finish in 2019. A First Team All-District selection this year for Carmel, Bonnici also enjoyed success with her club side, helping them qualify for the ECNL playoffs four consecutive years and reach the final eight in 2019. She also was a member of the 2017 ECNL Ohio Valley division champions.

Bonnici on why she chose Valpo: “I chose Valpo because as soon as I visited the campus and met the players and coaches, I knew that this is where I want to go to college. I could tell that the environment of both the campus and players was one that I would be able to succeed in and grow as a player. Valpo also had the major that I wanted to study, so I knew it would be a perfect fit for me.”

Marovich on Bonnici: “Claire brings good size and pace to the center back position. She does a great job of reading the game, knowing when to step hard and when to be patient. Her passing range out of the back will be a big asset to our back line.”

Cook has been a starter since her freshman year for the Jaguars, scoring 10 goals as a sophomore in 2019 to help lead D’Evelyn to an appearance in the state quarterfinals and a 13-2-2 overall record. Cook has also picked up All-Conference honors for her work up top.

Cook on why she chose Valpo: “I chose Valpo because of the incredible soccer program that immediately made me feel like a part of the family. I know that Valpo is a great school both academically and athletically, and it is the right place for me to start my college journey. As both of my parents are Valpo alumni, I am very honored to continue the legacy.”

Marovich on Cook: “Lauren is a true attacking flank player. Her pace, athleticism and decision making on and off the ball will be a great addition to our attacking third. She is committed to winning the end line and her left-footed services have outstanding accuracy.”

Crompton helped lead the Elks to conference, district and regional titles this year as they earned a spot in the state semifinals. She was named an All-Conference recipient after earning All-Miami Valley honors last season. On the club level, Crompton was a member of the Ohio State Cup champions in 2018 and a semifinalist side in 2019. She also helped capture MRL and OSSL championships in 2018 and was a 2017 ODP Regional player.

Crompton on why she chose Valpo: “From the very beginning, the coaches at Valpo invested in me. I instantly believed in the vision of the program and all of my core values aligned. The strong academics and community feel attracted me to the university. I feel that at Valpo, I will not only develop on the field, but off the field as well. I am so excited to compete and work with the team toward a common goal.”

Marovich on Crompton: “Cara is a strong and physical defender. Her pace and her aggressive playing personality provide her the opportunity to perform as a center back or as a wing back. She does a great job of driving forward with the ball while reading the game to deliver line-breaking passes through seams and with texture over the top.”

Evans has enjoyed plenty of success at the club level, helping the Colorado Storm to State Cup titles in 2017 and 2018 and appearances in the ECNL playoffs three straight years. A member of the ODP State Team in 2016 and 2017, Evans also played for the ODP West Region Team which went undefeated in a regional tournament in Florida. With her prep side, Evans has earned Second Team All-League accolades.

Evans on why she chose Valpo: “I chose Valpo because of the amazing soccer program, family culture, education and location. I felt very welcomed from the first time that I talked to Coach John and Coach Sandra, and could not stop thinking about attending this school. I think that this school is the best fit for me and will provide me with the best opportunity to grow as a person and as a soccer player.”

Marovich on Evans: “Peyton is a versatile player who can play in any wide position on the park. Her work rate and pace are strong attributes, but her decision making with the ball is what drew us to Peyton. Her runs off the ball come from her constant scanning of the field and conceiving what movements will break down the defense.”

A two-time Third Team All-State honoree, Joiner was a prolific goal scorer for the Trojans, setting the program’s career record with 113 goals and leading the conference in goals each of the last four years. She helped lead Chesterton to an appearance in the regional title game this year. Also a two-time First Team All-District recipient, Joiner won the 2018 Illinois State Cup with her club side.

Joiner on why she chose Valpo: “I knew Valpo was the school for me from a very young age. I lived so close to campus and I grew up watching Valpo soccer. To finally wear the jersey and be a part of the program is a really special feeling.”

Marovich on Joiner: “Addy has a goal-scoring mentality in the attacking third, not just with ball striking but with subtle movements to shed defenders. She plays with unbelievable passion for the game displayed by her willingness to run at defenders to unbalance a defense or exploit the space in behind, making her a difficult mark for the opposition. Addy's passing technique displays great weight, shape and accuracy, which puts her teammates on the receiving end in an outstanding position to succeed.”

Michalak has been a four-year varsity starter for the Raccoons. On the club level, she was a 2017 ODP regional player and helped her team to a semifinal berth in the 2017 Wisconsin State Cup. In 2018, Michalak helped lead her team to an undefeated mark in the MRL Premier 1, while she finished the 2018-19 campaign as the leading scorer in the Strike FC Premier 1.

Michalak on why she chose Valpo: “I chose Valpo because of the awesome coaches, the amazing academics and the strong school culture. It fits all the qualities that I’ve looked for in a university. The campus feels like home and I know Valpo will allow me to pursue my goals on and off the field. I can’t wait to meet my teammates and make an impact!”

Marovich on Michalak: “Raegan's field persona generates a relentless pursuit to get behind defenses. This comes by way of quick combinations to break the line, quick counter movements to free herself and a spirit to take players on 1-v-1. Her pace, vision and ball striking provides her the opportunity to score and distribute in the attacking third.”

A four-year starter for the Chiefs, Morrison earned All-District honors and twice received honorable mention All-Conference notice while helping her team claim a KLAA division title and a district championship. With her club squad, Morrison reached the Michigan State Cup semifinals in 2017 and the quarterfinals in 2018 and 2019.

Morrison on why she chose Valpo: “I chose Valpo not only because of the staff, the soccer program and the education, but because there is also a family atmosphere that I loved. When I stepped on campus, I knew that Valpo was the right school for me. I want to make an impact at Valpo and I can't wait to meet my teammates!”

Marovich on Morrison: “Emma is a tall and strong central defender who can play either as a center back or holding midfielder. She is good in the air, steps hard, separates players from the ball and tackles with purpose. Her vision to play out of the back and swing the ball makes her not just an effective defender, but also a possession-based player, which fits the attributes we value in players.”

White has been named an All-District recipient in 2018 and 2019, also picking up honorable mention All-Conference accolades the latter year. She led the conference in assists in 2018, helping lead the Vikings to an appearance in the district finals. In club action, White helped her team to Michigan State Cup and Midwest Regional League titles in 2018, an appearance in the Michigan State Cup semifinals in 2019 and a Development Academy Conference championship in 2020.

White on why she chose Valpo: “I chose Valpo after having an immediate connection with the coaches. Our conversations reassured me we had a similar style of play, which made me feel at home. I feel like I have found a strong soccer family at a great academic school with small class sizes. This combination is exciting. My decision is strengthened by the welcoming campus atmosphere and the faith-based culture adds another layer of comfort. I feel confident Valpo is the right home for me and I can't wait to spend the next four years here!”

Marovich on White: “Abby possesses the instincts of a quality wing back. She makes outstanding decisions with the ball either to draw in defenders to pass or dribble centrally to disrupt the shape of the opposition. Her vision and recovery pace make her a very effective and dangerous player on the flank.”