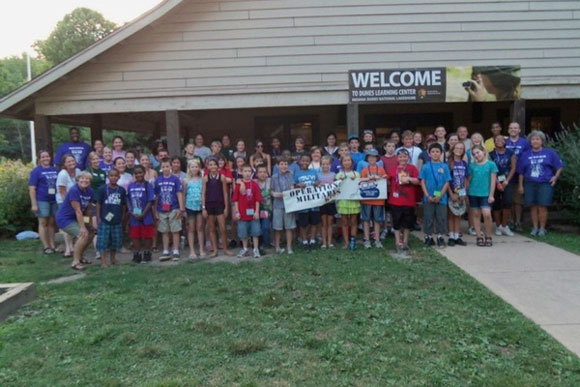 With barely a month left until the first day of camp, Indiana Operation: Military Kids has raised $3,000 of the $22,000 needed to provide 63 children with a week of adventure, companionship and respite.

Due to spending reductions, the Department of Defense granted funding to only 23 states for Operation: Military Kids summer camps this year. Indiana was not among them.

In January, it was doubtful that a camp would be held. But Dunes Learning Center and the American Legion teamed up to raise the money needed to restore the program.

"There are a lot of organizations in the state that support military families, and it's great to see Dunes Learning Center keep that commitment and serve military kids," said Ryan Wynkoop, coordinator for Indiana Operation: Military Kids, based at Purdue University.

Last month, Dunes Learning Center Executive Director, Geof Benson, took his appeal to crowd-funding website Indiegogo just in time for Memorial Day. Since then, donations have been rolling in from individuals and veterans groups across the country.

Most of the donations are small, but the sentiment speaks volumes.

“Raising money for the camp is a way to show appreciation to members of the military who are separated from their families in service to their country,” said Benson. "The parents are doing a great job serving our country, the least we can do is send their kids to camp."

Indiana Operation: Military Kids camp is due to start on July 14, 2013. Activities such as swimming in Lake Michigan, hikes in the dunes and s’mores over an open fire will be complemented by counseling and team-building programs.

Children with a parent, guardian or sibling who is either currently serving in the military, or has been wounded or killed in action, are eligible to attend. Last year, all five branches of the armed forces were represented at the camp.