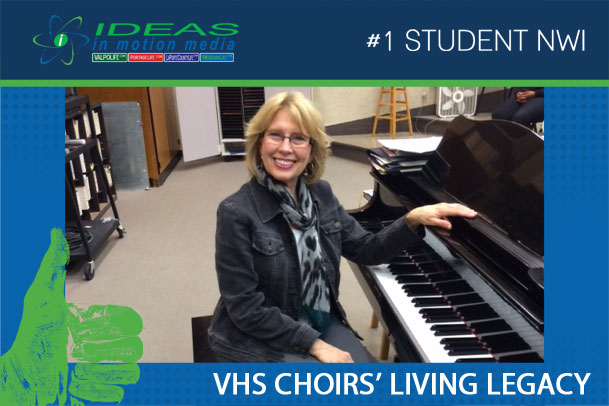 Ever since I had the ability to form words, I remember I would sing. I would sing songs that played on the radio, music my mother showed me, and sometimes tunes that I just made up in my head. Singing became as essential to me as talking. So when I entered Valparaiso High School as a new member of Women’s Chorus, I wanted to learn as much as possible about singing and music in general. And who better to turn to than the woman who is in charge of it all – VHS Choir Director Mrs. Linda Schonbachler.

With 37 years of teaching experience (27 at VHS), Mrs. Schonbachler has built the VHS Choral Program to be one of the top 10 in the state. She is responsible for five choirs: Mixed Chorus is the training choir; Women’s Chorus and Men’s Chorus are the intermediate choirs; Concert Choir is the advanced choir; and Varsity Singers is the show choir.

When I sat down to talk to Mrs. S. (as she lets her students call her), I knew I was consulting the right person. During our interview, she shared her experience, best memories of travels and awards along the way, and her incredible love of music and teaching.

Q: What is the most rewarding aspect of your career?

A: I really enjoy what I do. My greatest reward is to see the students become talented musicians and to see them grow musically. I have several students who are now professional musicians, who teach choir in the college setting, who are composing music, and performing on the Broadway stage. That’s very rewarding. 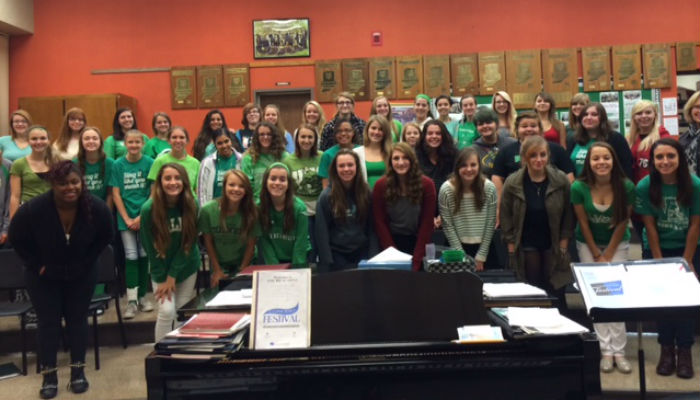 Q: Your choirs have traveled around the world – can you tell us about some of those travels?

Q: What is your philosophy for success?

A: 'We are what we repeatedly do. Excellence, therefore, is not an act but a habit.’ - Aristotle

Q: What do you like most about your position?

A: I like that every day is different. That it’s not the same thing all of the time. I like seeing the light bulb go on in a student’s mind, saying, ‘I get it, I finally get it!’ and when they can feel proud on how they sound.

Q: What are you most proud of?

Q: If you could give someone advice to succeed in music, what would it be?

A: Take piano lessons. You’ll be able to sight-read and once you can do that you’ll be able to read any piece of music. And if you’re a singer, you should take singing lessons too.

Q: Do you have any special stories or memories from your time at VHS?

A: The year we got to go to France and Germany was the year where we were able to represent the state of Indiana for the 50th anniversary of World War II. At the American cemetery, we sang the American National Anthem and then the French National Anthem. We also saw a lot of the World War II veterans in wheelchairs…and I remember that they shook our hands and they wouldn’t let go. They said, ‘Thank you for remembering us and what we did,’ and the whole scene was very moving. I had a student that brought his trumpet along and played Taps during it too.

We learned this was also the place where Saving Private Ryan was filmed. You’d look around and you see the crosses and the Stars of David and it goes on forever. Then we realized right there at the beach – Omaha Beach – was where more than 2,000 American men were killed. So, just being there was life-changing…and I still have students who come back and say, ‘I remember that time and it was such an important part of my life.’ So that was a very rewarding and amazing time.

Also when my former students come back and say things like ‘they miss choir and all the things we did, the places we got to go and perform.’ Yes, that stands out.

Q: Do you have a final message you’d like to add?

A: Yes, a tip to any student: Get involved in a lot of things in high school. Since you’re probably good at a lot of things, but just haven’t tried them yet. And know that you can be a well-rounded student. You can be in sports, music, drama, etc.; both my son and daughter graduated from VHS and they were in everything. Honestly, this is the last chance for students to really do that because once they get in college they are in a new phase and on a one-way track towards their career goal. So take advantage of the many opportunities when you have the chance.

And finally, in my opinion music is something you can always have with you. You can always perform, especially singing – since it isn’t like some instrument you can throw into the closet and forget about. Singing is a part of your body, it’s a way to express your emotions, and it’s a wonderful outlet for anyone. So, have fun with it! Try it out!

As you can see, the VHS Choral Department is definitely one to be proud of and Mrs. Schonbachler’s advice rings true – wherever you’re a student – Valpo or somewhere else – it’s never too late (or early) to get connected to music and singing. It’s just like she said, “Music is something you can always have with you.”