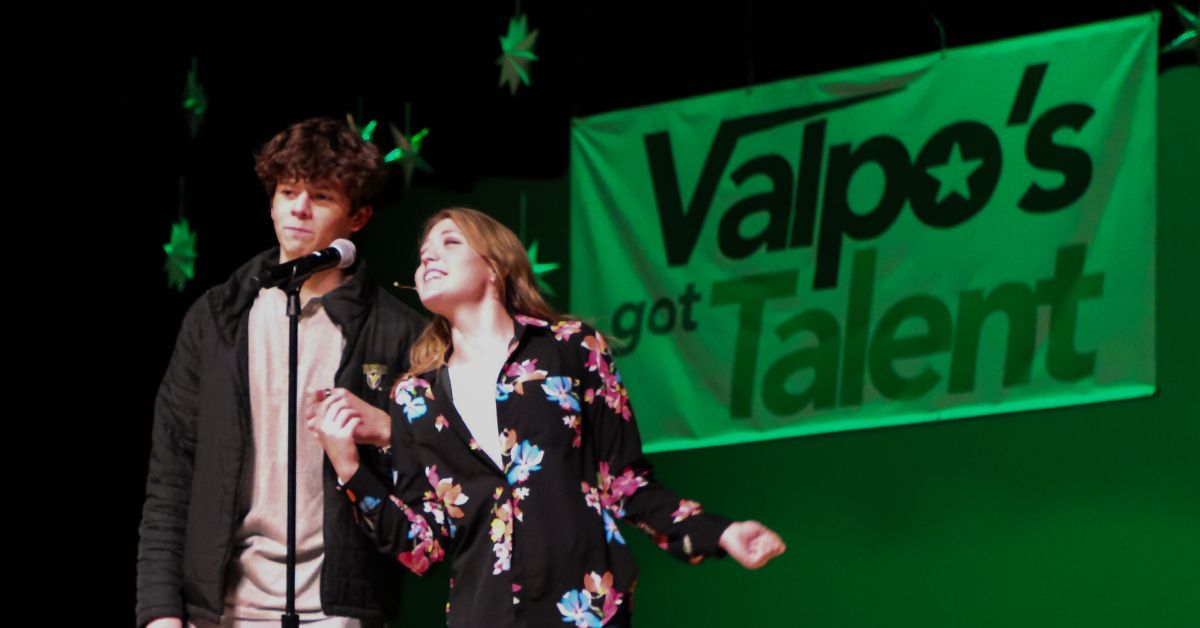 The Valparaiso High School (VHS) drama club opened their annual "April Antics" performance on Thursday evening. Auditions for the variety show, themed "Valpo’s Got Talent," began in March and the show was written and directed by students.

This is the first time in two years that the school has been able to host their spring show and the students could not have been more excited to be back on stage.

“They get to choose the theme, they get to choose what skits are in the show, and come up with their own talent acts. It is really student driven,” Molly Oros, VHS English teacher and 'April Antics' director said.

Many students in the production had the opportunity to try something new by writing the skits and directing this year. Over the course of a three-week rehearsal period, students wrote, practiced their skits and talents, and directed their work.

“Mrs. Oros asked around to find out who wanted to write for the show and I just signed up. It’s been really stressful but really fun. I get to see my ideas come to life,” Senior Joy Luther said. “I’m excited for people to see it since we wrote it ourselves. It will be fun to see how people react to our work instead of someone else’s work.”

Many students in the cast have been part of the drama club throughout most of their time at Valpo and shared that they were most excited about the work being their own. The variety show style production consists of 21 unique skits that all have a theme from singing, dancing, comedy, and even commercials. The 23 person cast had the opportunity to show case their talents for the audience of family, friends, and VHS staff on Thursday night.

“I’ve learned a lot about team work. There is a lot of different talents coming together for this show. Everyone gets to see a little bit of something that they like,” Senior Claire Pals said.

Behind the scenes of the live show, students worked hard as stage managers worked to keep the show moving and set up for each of the skits. Junior Natalie Orban has been involved with drama since her freshman year and has been a stage manager for many of the group's past shows. She shared that the drama club community and meeting new people is what she enjoys the most.

“I’m very thankful for everyone here and I want to thank Ms. Oros and Mrs.(Colleen) Peluso for making drama club so amazing," she said.

Many members of the cast have been part of drama club for most, or all, of their four years of high school. Many shared that the bond that they’ve created has been amazing and several members of the cast intend to continue in theatre in college. Luther is proudly majoring in theatre at Indiana University in the fall and Pals is currently working through the college audition process now.

"April Antics" is happening through April 9. Tickets for the 7 p.m. show are $10 each and can be purchased at the door. For more information on VHS and April Antics visit their website at valparaisohigh.valpo.k12.in.us