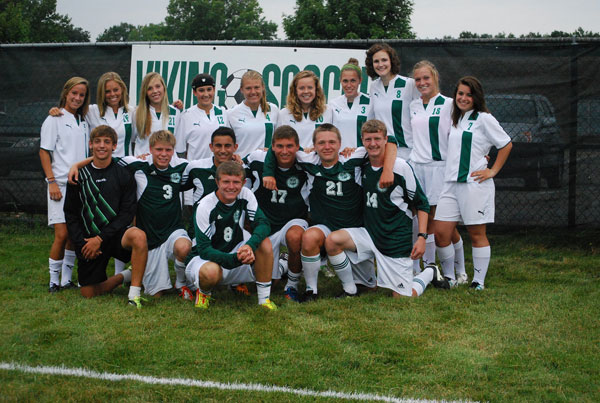 In week number 3 of the State Rankings, Valparaiso High School finds both their men's and women's soccer programs listed in the top 20. This week, the men are ranked #15 after defeating two top 20 teams in the last 10 days. After beating Westfield, 4-0 on a warm Saturday afternoon, they came back last Wednesday at defeated Chesterton on their home turf by a score of 1-0.

The next 10 days will prove the strength of the Vikings, as they will be traveling to South Bend St. Joe on Saturday September 8th for the St. Joe Classic Tournament. The following Wednesday they will play host to the 2011 State Champions, Crown Point Bulldogs. That night will also be the Meet the Vikes Night for the men's team and the team/parents/coaches are hoping for a huge crowd!

The women's team is off to a great start and in week 3 find themselves ranked #18 in the polls. After defeating top twenty ranked Chesterton by a score of 4-0, they have found the back of the net 23 more times in two games. The next 10 days will prove they are worthy of recognition as the team of 10 seniors, 4 juniors and 2 sophomores will be challenged by other State ranked teams.

Before they head to South Bend next Saturday, they will be hosting the Meet the Vikes night on Thursday September 6th. You will want to arrive early, sign-up for the drawings and chances to participate on the field at half-time and stay to watch two very talented teams. JV begins at 5:00pm with Varsity immediately following. Saturday the 8th, Valpo will travel to South Bend to face highly ranked and talented St. Joe. Then on Tuesday, September 11th Valpo will travel to Crown Point to face their Duneland Athletic Conference rivals.

Both teams are undefeated in the race for the DAC crown and this will be a very important game for the Vikes.

For both the men's & women's team, this is just the beginning. Mark your calendars early, so you won't forget to pull out your Green & White and travel to cheer on your Valparaiso Vikings Soccer Teams!