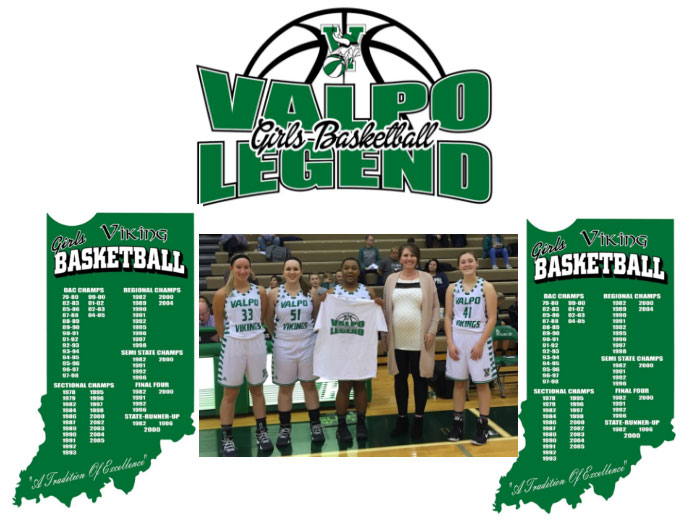 The girls’ basketball teams had a very busy holiday break. From the freshmen to Varsity teams they played a total of nine games while we were away. The Varsity defeated Logansport in the opening round of the Twin Lakes tournament. Unfortunately they lost close games to Penn, Mount Vernon (Fortville), Cathedral, Portage and East Chicago. Their record is now 11-8 and 3-2 in the DAC. The JV went 3-2 defeating Penn, LaPorte, and East Chicago and losing close games to Carmel and Portage bringing their record to 11-5 overall and 3-2 in the DAC.

The freshmen lost to Lake Central 26-11. Ryanne Reese led the way with 3 points, 3 steals and 2 rebounds. Portage defeated Valpo 29 - 12 on Tuesday night. Lucia Otten scored 5 points and Sierra Bradney had 4 rebounds with 3 steals in the loss. Also in the B game (2 quarters) Valpo defeated Portage 17 - 7. Maryn Lazar scored 11 points with 2 steals and 2 rebounds.

The two home games over break gave us an opportunity to recognize two more Legends of Valpo Girls Basketball. At the Penn game, Courtney Rosenbaum, who played basketball for VHS from 1998-2001, was recognized. Her favorite memory while playing at VHS was her road to state with her team in 2001, where they faced a tough Ben Davis team and fell a few inches short of a win. Contrary to the fact that her and her team lost, this became one of her favorite memories, as not many people can say they have gone to state. Courtney scored exactly 1000 points in her career at VHS. Courtney’s coaches during that time were Coach Greg Kirby and Kathy Levandoski. Courtney went on to play basketball at St. Joseph College in Rensselaer where she became one of the top 10 scorers in the school history. Courtney has learned from her playing time here at VHS that hard work is always worth it in the end, and if you work hard enough in anything you do, good results will always come. Her advice to the girls’ basketball team is to always have fun with your team and the game, and if you aren’t, then fix it. Courtney is currently married and has four children and one on the way. She works at Hebron Elementary, where she teaches PE and art classes to Kindergarten, 1st and 5th graders.

At the Portage game, Kathy Levandoski, who played basketball for Valpo from 1976-1978 and later went on to coach the team. One of her favorite memories playing basketball was winning the very first sectional in Valpo Girls basketball history. After graduating high school, she went to the University of Wisconsin in Whitewater where she played three sports; volleyball, softball and basketball and she was inducted into the University of Wisconsin Hall of Fame. After college she came back to VHS and became Assistant Girls Basketball Coach from 1990-2012. She was also the VHS Head Athletic Trainer for the school for many years. Her favorite memory while coaching was reaching the Final Four multiple times. She also enjoyed all of the different interactions she has with the players. Lev said, “Basketball has taught her compassion, hard work, and how to work with others.” One piece of advice she has for Valpo Girl Basketball players is to always work as hard as you can and be a good teammate. She is married to Tom Levandoski and is a special education teacher at VHS.

The JV boys’ basketball team went 1-1 in the JV Holiday tourney on December 23rd. They lost to Chesterton 38-43. Mason Schmidt and CJ Opperman led the Vikings with 7 and 8 points respectively. The Vikings then beat Merrillville in the second game of the day 46-35. Rafeek El-Naggar and CJ Opperman led the way with 11 and 14 points. Peyton Krutz led the team with 6 rebounds. On January 5th the JV team opened up conference play with a victory over Portage 47-17. A close game at half time, the Vikings did not let Portage score a field goal in the 2nd half and only gave up two points. They were led by Mason Schmidt's 11 points and 3 assists and CJ Opperman's 9 points and 7 rebounds. On January 6th the Vikings defeated a tall and physical Penn Kingsmen team 52-44. CJ Opperman had 16 points and 5 boards, Logan Mersman also had 9 points and 5 boards, and Luke Balash 8 points and 3 rebounds. They are now 9-1 on the season.

The wrestling team was working hard over the break and it showed at the Connersville Invitational. They were able to have two great days of wrestling. They finished 8th overall out of 32 teams and had 6 individual place winners. Of the twelve wrestlers competing eight of them qualified for the second day of wrestling. The six place winners included Jak Krouse (6th), Jacob Bond (8th), Brycen Nylin (6th), Ian Dembowski (3rd), Ronnie Deluna (5th), and JB Cioe (8th). This was Ian's fourth time placing in the top 3 or higher at the tournament. On January 3rd they lost to Portage 51-16. Winners were Jacob Bond at 126, Brycen Nylin at 132, Ian Dembowski at 138, and Jeffrey Furst at 145.

The VHS Gymnastics team opened the 2018 season with a victory over Crown Point on January 4th. The Vikes won with a 110.1 to Crown Point's 106.475, a good team score for the start of the year. A highlight of the meet was the team performance on the Balance Beam, with a 28.2 total. Jenna Algozine won with a 9.45, Lizzy Wilson took second at 9.425, and Rachel Moneta's 9.325 rounded out the scoring for the event. Moneta also won Floor and All-Around, and tied with Lizzy Wilson for first on Vault. Wilson was second in the All-Around, Bars, and Beam. Megan Wagenblast took third on Bars, and placed 5th in the All-Around. A solid team effort, with event scores all over 27, helped secure the victory. The Vikes also won Team II, 98.825 to 95.4. Event winners included Katie Pastoret, Marissa Story, and Eden Roberts.

The Gymnastics team showed its team depth by placing all 2nd, 3rd, 4th, and 5th at the Viking Pairs meet this past Saturday. VHS won the overall team trophy with 30 points, McCutcheon 18, Lake Central 9, and Plymouth with 0. The highlight of the meet was the Uneven Bars, with Jenna Algozine (9.65), Lizzy Wilson (9.550, and Rachel Moneta (9.5). Megan Wagenblast and Hallie Utsler scored 35.8, Wilson and Katie Pastoret scored 35.5, Ella Montgomery and Moneta had 35.5, and Algozine and Marissa Story scored 34.95.