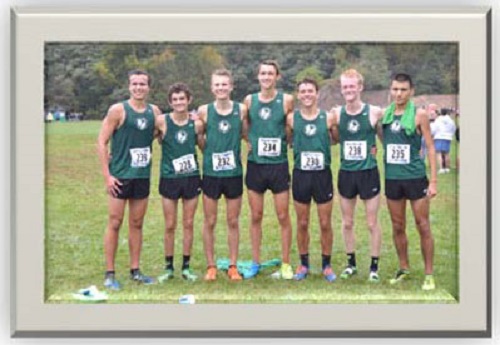 The volleyball team lost a heartbreaking five game match to Michigan City Saturday in the first semi-final of the IHSAA Sectional. The Vikings finished the season 20-17.

The football team defeated Lake Central 42-8 on Friday to clinch their first outright DAC championship since 2010. The Vikings finished the regular season 9-1 and tied at 4th in class 6A with Penn in the Coaches Poll. Next up is Penn at home in the first round of the IHSAA Sectional on October 27 at 6:30 PM. Tickets are $6 kindergarten and up. Because it is the IHSAA tournament all spectators must purchase a ticket as no VHS or DAC passes will be accepted.

The last home game of the year also was our Coaches vs. Cancer night. Thank you to everyone who contributed. We collected $864 for the American Cancer Society.

The girls’ cross country team raced at New Prairie for the second week in a row in the IHSAA tournament series. They came away with the Regional Championship by placing the top five runners inside the first fifteen finishers. Ava Gilliana won the race followed by Logan Ferngren in 3rd, Emily and Sarah Worthington in 8th and 9th respectively, Julia Arnold in 14th, Hannah Fitzgerald in 18th, and Elena Kipp in 21st. They easily outdistanced 2nd place by 13 points. Next up is the third week in a row on the New Prairie course in the IHSAA Semi-state with a chance to qualify for the state meet on October 28th.

On Saturday, October 14, the Boys' Cross Country team traveled to New Prairie High School to take part in the second round of the IHSAA post-season tournament, the Regional Championship Meet. Despite facing a wet and muddy course on account of the heavy rains, the Vikes competed very well, placing all seven runners in the top twenty, and took home the team title, Valpo’ s sixth in the past eight years.

Each year, the IATCCC (Indiana Association of Track & Cross Country Coaches) recognizes student-athletes in the sport of Cross Country who display exceptional educational success in the classroom and outstanding testing performance with the Academic All-State Award. In order to be eligible, a student athlete must be a junior or senior, on the Sectional Roster, have a minimum GPA of 3.5 (out of 4.0) and have either an ACT greater than 26, or an SAT/PSAT greater than 1200/1140. Congratulations to the following Vikings who earned First Team Academic All-State for the 2017 Cross Country Season: Carl Frey, Tristan Hargett, Andrew Recker, and Nate Smith Congratulations to the following Vikings who earned Academic All-State Honorable Mention for the 2017 Cross Country Season: Joseph Angert, George Azar, Collin Huber, and Nick Tonne To see the complete list of 2017 recipients, see previous years' award winners, or find out more about the nomination process, click one of the links below: 2017 Academic All State Award Winners http://iatccc.org/devsite/wp-content/uploads/2017/10/17boysccacad.htm Past years' Academic All State Award Winners http://iatccc.org/devsite/?page_id=3006

Members of the 2017 State Champion girls’ gymnastics team were recognized at the football game this past Friday with their state champion rings purchased and presented by members of the Valparaiso Rotary.

The 2017 girls’ golf team who placed 10th at the state were recognized at the football game this past Friday as well.