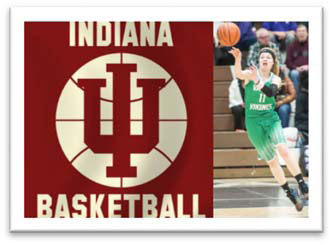 The last few issues of the Viking Sports Report have highlighted a few areas of exemplary sportsmanship demonstrated by our student-athletes and coaches. IHSAA officials are encouraged to identify schools who exemplify positive sportsmanship and promote an environment for healthy and fair competition. This past Thursday the volleyball team hosted Crown Point. Unfortunately we lost two of the three matches however the official submitted the following report to the IHSAA later that evening, “An official can say it was a great match when coaches, players, and fans let us do our job. This does not happen enough during our season. I want to commend both teams and their spectators for this last night.” Thank you Viking fans for assisting us in creating an outstanding environment for interscholastic sports.

Valparaiso Girls Basketball stand-out and 2015 graduate, Grace Withrow, attended open try-outs this past month at Indiana University. We have received word that she will be a walk on with the Indiana University Women's Basketball Team in Bloomington as a junior. Congratulations to Grace and her family!

The girls’ golf team completed their outstanding season this past Friday and Saturday at the IHSAA State Finals in Carmel. The team finished 10th. Congratulations to Sophomore Wynne Aldrich for her All State performance finishing in an 11th place tie. She was followed by junior Claire Lee tied for 69th, junior Grace Cusson tied for 77th, senior Ema Gilliana tied for 81st, and sophomore Annika Johnson in 94th. Congratulations girls and Coaches Miller and Gutierrez on an outstanding season!

The girls’ cross country team competed in the DAC championship hosted by Lake Central on Saturday. Both the JV and Varsity teams won. The JV race was won by Valparaiso junior Corinne Ritzi followed by Nicole Brandy in 2nd, Hannah Shepherd in 7th, Adriana McFadden in 9th and Kristyn Hoffman in 10th. They easily outscored Chesterton by 18 points. The Varsity was led by defending DAC champion Ava Gilliana in 1st, Logan Ferngren one second behind in 2nd, Emily Worthington in 8th, Sarah Worthington in 10th, and Julia Arnold in 15th. Hannah Fitzgerald and Elena Kipp finished 21st and 22nd rounding out the Varsity seven. Next up is the IHSAA Sectional on Saturday at New Prairie HS.

On Saturday, September 30, the Boys Cross Country team traveled to St. John, IN to take part in the Duneland Athletic Conference Cross Country Championship Meet. Facing off against teams from all of the DAC member schools, the Vikings competed very well and placed first in both the Varsity and Junior Varsity divisions. It was a total team effort as the Varsity placed all seven runners in the top eighteen. Scoring for the Vikes in the Varsity race were Collin Huber (2nd, 15:29 *PB*), Carlos Martinez (3rd, 15:40 *PB*), Nate Smith (7th, 15:53), Jack Acton (10th, 16:00 *PB*), Carl Frey (13th, 16:12), Matt Cavanaugh (14th, 16:14 *PB*), and Nick Tonne (18th, 16:23 *PB*) For the Varsity, Saturday's win marked the seventh Duneland Athletic Conference Championship in the past eight years! Congratulations to Collin Huber, Carlos Martinez, Nate Smith, and Jack Acton who earned All-Conference honors! The Junior Varsity squad placed eight runners in the top fifteen to capture the team title for the second straight year, as many team members recorded new lifetime bests. Leading the way for the Vikes were Ty Puskar (2nd, 16:45 *PB*), Will Miltenberger (3rd, 16:49 *PB*), Nick Clark (4th, 16:50 *PB*), Tommy Cavanaugh (6th, 17:02 *PB*), Joe Angert (8th, 17:03 *PB*), Carter Stephens (9th, 17:05 *PB*), and Ethan Vinyard (12th, 17:16 *PB*). Next up for the Green & White - the IHSAA Tournament gets underway this Saturday, October 7, as the Varsity travels to New Prairie to take part in the Sectional Championship Meet.

Boys’ soccer finished their regular season this past Saturday with a match against rival Munster. The Varsity was victorious with a 1-0 penalty kick by Sam Klumpe. Blake Mersman had eleven saves on the day. The Varsity ended the season 6-8-3 and 5-2 in the DAC. The JV lost 4-1 to Munster. The JV travelled to Crown Point this past Monday for two games against conference foes Chesterton and Crown Point. The handed Chesterton their only loss of the season and fell short of Crown Point 2-0. Ryan Thien scored his team leading 12th goal of the season with 1 minute left in the Chesterton game with an impressive individual effort. They finished their season 8-6 and 5-2 in the DAC. They took on Merrillville in the first round of the sectional on Tuesday winning 2-0. Blaise Sellers scored both goals and Blake Mersman had five saves. Unfortunately, their season came to a close on Wednesday night in the semi-finals of the IHSAA Sectional losing 1-0 to Crown Point. They finished the season 7-9-3 and tied for second in the DAC with a 5-2 record.

The volleyball team took on LaPorte on Tuesday night. The freshmen and Varsity won. The three teams travelled to Portage on Thursday night to finish the regular season. The Varsity lost while the freshmen and JV won. The Varsity is 19-16 and 8-6 in the DAC. The JV is now 11-15 and 7-7 in the DAC. The freshmen are an impressive 23-3 overall and 10-2 in the DAC. Coach Lenard reports, “Gillian Walls is having an outstanding senior season. This year, taking on the setting role has been a challenge for her. She worked hard in the off season to prepare herself for this difficult task. She is certainly delivering. Her superb athleticism and high vertical make her an extremely dynamic setter. She is leading the conference in setting assists with 669. Gillian is also second on the team in aces and digs.”

The girls JV soccer team defeated Highland on Thursday, September 28 2-0. Shea Pendleton scored both goals. The JV also participated in the Penn Tournament this past Saturday. They came away with two victories and the championship trophy. The defeated South Bend Adams 5-1 and Penn 2-1. Hannah Dauterman had seven saves on the day and Bri Gast one. Lucia Otten and Ashlynn Templin scored for the Vikings. The JV finished the season 15-1. Nice job ladies!

The Varsity beat Portage in the first round of the Sectional behind two goals from Bella Grisafi and one from Janci Courtaney. They easily dispatched Hobart in the second round by a score of 6-0. Scoring for the Vikings were Janci Courtaney with two goals, Annelise Rubin, Morgan Catchur, Kelly Landry, and Bella Grisafi with one goal each. Hobart did not have a shot on goal so Stella Cusson and Courtney Thomas had zero saves. They will now face Chesterton in the finals on Saturday at 7:00 PM.

The volleyball team took on LaPorte on Tuesday night. The freshmen and Varsity won. The Varsity is 19-15 and 8-5 in the DAC. The JV is now 10-15 and 6-7 in the DAC. The freshmen are an impressive 22-3 overall and 9-2 in the DAC. Coach Lenard reports, “Gillian Walls is having an outstanding senior season. This year, taking on the setting role has been a challenge for her. She worked hard in the off season to prepare herself for this difficult task. She is certainly delivering. Her superb athleticism and high vertical make her an extremely dynamic setter. She is leading the conference in setting assists with 669. Gillian is also second on the team in aces and digs.”