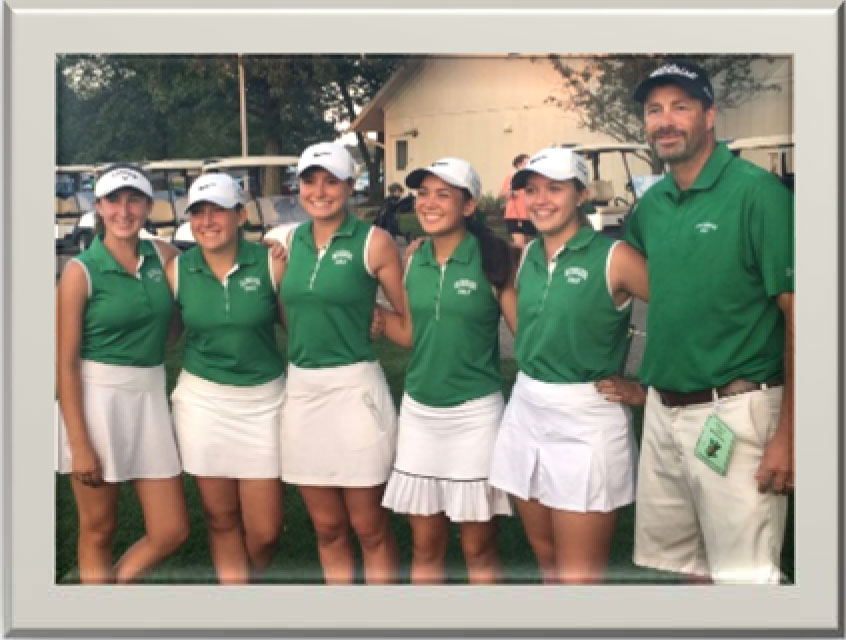 It’s Homecoming week at Valparaiso High School. The week has been filled with spirit week activities including dress up days, a Powder Puff football game, a pep rally downtown, a parade this afternoon, the crowning of a queen, a football game, and will culminate on Saturday night with the Homecoming dance. It’s been a busy week.

The girls’ golf team claimed their spot at this weekend’s state championship at Prairie View Golf Club in Carmel by finishing third at the regional. They finished nine strokes behind Lafayette Jefferson in first and five strokes behind Culver Academy in second. They outshot Lake Central by five strokes to claim the last qualifying spot. The Vikings were led by Wynne Aldrich with a 79, followed by Grace Cusson 80, Ema Gilliana 83, Annika Johnson 89, and Claire Lee with a 93. Congratulations and best of luck this weekend! You can follow all of the action from Carmel live via https://www.birdiefire.com/tournament/41473/

The girls’ soccer team hosted Military Appreciation Night on Tuesday. We had nearly 60 active duty and retired military personnel take part in team introductions and the local Civil Air Patrol cadets served as the color guard. Kudos to the Valparaiso Vikings and this community for recognizing service above self.

The Varsity football team suffered their first defeat on Friday losing to Crown Point 21-6. Crown Point also reclaimed the County Seat Trophy. The JV continued their winning ways on Saturday beating Crown Point 10-6 to stay unbeaten. The freshman team lost to Crown Point on Thursday night 13-0. After the Varsity game Friday night, the referee submitted an IHSAA Sportsmanship report commending both schools for their efforts. The referee specifically mentioned players assisting each other off the ground, providing positive comments on the field to each other, the coaches maintaining control of the sidelines, and showing respect of the officiating crew.

Boys’ tennis had a busy weekend in the oppressive heat. They hosted Ft. Wayne Canterbury on Friday evening losing 5-0 at the Varsity level but winning eight of nine matches at the JV level. On Saturday they hosted Lafayette Jeff in the morning and Lafayette Harrison in the afternoon. They came away with the split beating Jeff 4-1 and losing to Harrison 3-2. The JV won all nine matches against Jeff and six of eight against Harrison. The Varsity record is now 11-6 and the JV is 18-1. They took on Chesterton in the IHSAA Sectional on Wednesday. Unfortunately they lost 3-2. Congratulations on a fine season!

The boys’ soccer teams travelled to Indianapolis North Central on Saturday. Both teams were shutout, Varsity 4-0 and JV 3-0. Blake Mersman and Evan Fletcher combined for 15 saves in the Varsity game and Jubal Harmon had 10 in the JV game. The boys’ travelled to conference rival Portage on Wednesday night. Both teams came away victorious. The Varsity won 3-1. Blaise Sellers had the hat trick and Evan Fletcher and Blake Mersman combined for three saves. The JV won 3-0 with Ethan McFadyen, Andrew Borowiak, and Nick Gorseski scoring a goal each and Owen Rittgers and Jubal Harmon combining for five saves. The Varsity is now 5-8-3 and 5-2 in the DAC. The JV sits at 7-4. The IHSAA Boys’ Sectional kicks off next week with the Vikings playing the host school Merrillville on Tuesday, October 3rd at 7:00 PM. Tickets are $6 per session or $10 for an all session pass and are available at the gate.

Girls’ soccer hosted Plymouth on Saturday in the scorching heat. Athletic Trainer Dan Merrill kept the girls hydrated and cooled off throughout the day by keeping ice water and cold towels readily available. Coaches Oglesby and Cespedes had a constant rotation of players throughout both games to keep the girls fresh. It paid off as the JV won 3-0 and the Varsity won 7-0. Scoring for the JV was Aleah Ferngren with two goals and an assist, Annabel Murley with a goal and Shea Pendleton with an assist. In the Varsity game, Janci Courtaney had two goals and an assist, Olivia Shaw had two goals, Bella Grisafi had a goal, Claire Brogan had a goal, Aleah Ferngren had a goal and an assist, and Carlie Milroy had an assist. On Tuesday, they hosted DAC foe Portage. Both teams came away with impressive victories. The JV won 7-0. Scoring for the Vikings were Aleah Ferngren with three, Shea Pendleton with two, and Michaela Dunivan and Annabel Murley with one each. The Varsity won 10-0. Scoring for the Vikings were Olivia Shaw and Janci Courtaney with two and Annalise Rubin, Carli Milroy, Kelly Landry, Emma Pollitt, Claire Brogan, and Bella Grisafi with one goal each. Thursday night the girls travelled to Highland to complete their regular season. The varsity came away with a 3-0 win. Scoring for the Vikings were Annalise Rubin, Emma Polliltt and Janci Courtaney with a goal apiece. The Varsity finished the regular season 11-4-2 and 4-3 in the DAC and the JV is 12-1.

The IHSAA Girls’ Sectional kicks off next week with the Vikings playing the host school Portage on Tuesday, October 3rd at 5:00 PM. Tickets are $6 per session or $10 for an all session pass and are available at the gate.

Girls’ Varsity volleyball hosted their own Volleyball Challenge this past Saturday. They defeated Munster and Highland. The JV participated in the JV Diggz Invite winning once and losing twice. Both teams had a successful outing on Tuesday against conference foe Merrillville. Thursday night the hosted Crown Point. The freshmen team won in three while the JV and Varsity lost their matches. Coach Lenard selected the following athletes to highlight on this year’s team. Emma Terwilliger is a senior libero for the Valpo Volleyball team. Even though she enjoys the libero position, she did get a chance to step up a few times this year as an outside hitter. She has a nice vertical and hits the ball hard. Emma also brings good defense to the front row if she is playing as a hitter. In her main stay position as a libero, she has racked up 550 digs thus far. This ranks her as #1 in the state of Indiana! She is also leading the team in aces with 34. Emma plans to continue her volleyball career next year at Purdue University.

Bella Barounes is a junior middle hitter. Bella is a true athlete. She has one of the top verticals on the team. Because of her outstanding jump, she is leading the team in solo blocks with 33 and block assists with 52. These totals mark her at second in blocking in the DAC. Bella has also accounted for 67 kills and 12 aces this season. She has really been making her presence known in the conference this year!

On Saturday, the Valparaiso High School Boys’ Cross Country team traveled to Highland High School to take part in the 50th Annual Highland Cross Country Invitational. The 23 team field featured many schools from around Northwest Indiana, along with one Indianapolis area representative, Perry Meridian High School. Despite resting the majority of the usual Varsity line up in preparation for the upcoming post-season meets, and despite the unseasonably warm temperatures which were more reminiscent of summer than early autumn, the Green & White competed well (placing 11 in the top 22) and were able to pull off the win and repeat as meet champions.

The girls’ cross country competed in the Highland Invite as well and followed suit by resting many of their top runners. Those who did compete in the extreme heat finished a very respectable second to Lowell placing seven in the top 25. Scoring for the Vikings were Nicole Brandy in 12th, Ruth Stamp in 16th, Megan Dalton in 18th, Kristyn Hoffman in 20th, Corinne Ritzi in 22nd, Valerie Massey in 23rd, and Hannah Shepherd in 24th.