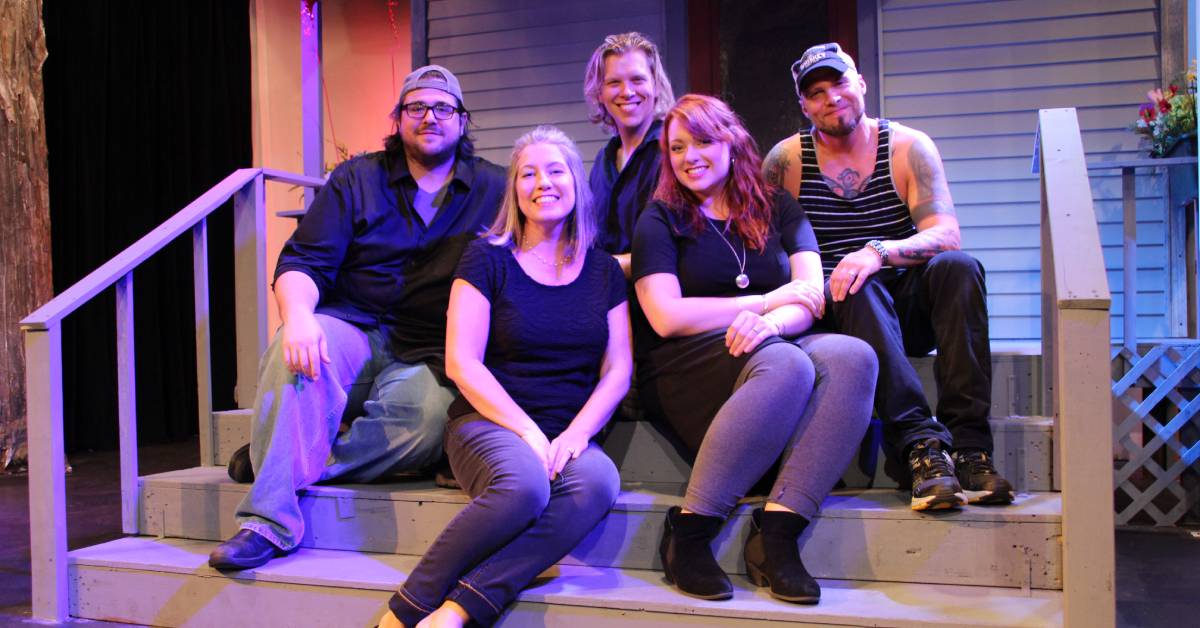 No matter the shifts a community weathers, people can always find strength in the communal experience of volunteering. For many communities, the arts offer just such an outlet—and an enriching opportunity to foster personal growth. Chicago Street Theatre (CST) celebrates nearly 65 seasons of producing live theatre for Valparaiso and the greater Northwest Indiana Region. In as much time, it has always relied on the generosity and drive of volunteers.

For many who have volunteered at CST for years, the draw was an initial interest in theater that flourished into a dedication to this community cornerstone.

Dona Henry has been volunteering with CST since 1991, when it was still known as the Community Theatre Guild and operated out of Memorial Opera House. Her first dalliance with the nonprofit theatre guild involved loaning her pooch to play Sandy in a production of “Annie.” Henry’s husband Jim is an actor, and after seeing the show, he decided to audition for a role himself. Since then, he’s appeared in numerous productions, and Henry herself has become the exemplary volunteer—in fact, there are few roles she hasn’t served for CST. From sound design and backstage tasks to acting and directing, from working in the box office to serving on the CST board and leading membership and marketing, Henry has done it all.

The Henrys have become almost synonymous with CST; everyone who’s worked on a show there knows them. The ability to blend into so many different settings within the theater appealed to Henry, and appeals to most who want to serve their community in some capacity.

“I love the aspect of putting on a show for the community. I love the work,” she said. “If you have a little bit of a business-bent mind, then there’s room for you there as well. There are a lot more than just the creative aspects of the theatre when it comes to volunteering, and the community focus of the whole endeavor is especially important.”

Henry said that once people start volunteering with CST, even with no background in theatre at all, they usually find their niche.

“Everybody finds what we like to call an expertise. I’ve mentored a lot of people who have come in as audience members and expressed interest in volunteering with us. They’ll start as an usher, move on to concessions, and so on. Eventually they’ll audition for a role, or learn to design lights. They find what suits them and stick to it, but have the freedom to continue trying other things.”

Henry and other seasoned veterans at CST are good at identifying these individuals.

“I look for people like that when I’m directing. If someone is interested in volunteering, we try to give them as much experience as we can. Opportunities to be connected to mentors, to grow into the company,” she said.

Mentoring is a huge advantage to volunteering with CST. Volunteering in all facets of the theatre allows participants to grow and learn. Jason Kaplan has been volunteering for 12 years at CST, and he’s been fortunate enough to continue growing as an actor, serve as secretary of the CST board, and lead as a mentor to others. A professionally trained actor and fight choreographer, Kaplan had taken nearly a decade-long hiatus before finding the theater. It was the Henrys who first introduced him to CST.

“One thing that really stuck out to me, especially after working for so many years in Chicago, was the level of professionalism,” Kaplan said. “The equipment alone and the level of talent was in line with, if not better than, smaller non-equity theatre companies in Chicago. The fact that we have this in Northwest Indiana is incredible.”

Now fight master for the company, plus a meticulous stunt and special effects choreographer, with the occasional stints as usher and title characters in plays (say Macbeth three times in a theater, face the consequences), Kaplan relishes focusing his passion at CST. He especially loves being a mentor.

“The educational opportunities we provide for young people who are considering pursuing acting or the arts as a profession will give them such an advantage when they pursue it at a collegiate level,” Kaplan said. “What these students learn here, some people don’t get until they get to college. With arts being reduced at the public school level, it’s amazing we’re able to offer it.”

“If you could see it now,” he laughed. “I get a ton of joy and fulfilment in teaching kids those foundations they need to go on and pursue acting. These are things that not every community, and not every kid, is able to have. I’m so passionate and love that we’re able to do that for this Region.”

“You know, one of the number one fears in the U.S. is public speaking. I admire anyone, myself included, who can get up there and overcome that fear,” Henry said. “And it’s amazing how when kids are involved with theatre, their lives are much more organized. Being able to give that aspect of shaping futures, as well, to provide camaraderie, a creative outlet for the kids, an opportunity for them to manage their time and learn, it’s a great feeling. A lot of kids have gone on to pursue professional careers. It’s a proud moment to know we were able to help give them a step up and watch them grow.”

John Norris, who just volunteered in his first production last year, said the caliber of work CST produces encouraged him to get involved.

“The high quality of theatre that we’re doing really stood out to me, not just with the caliber of acting but with our scenic design and technical elements,” he said.

Norris referenced the production of Macbeth he performed in, and how Jessie Howe, who played Lady Macbeth and served as scenic designer, created a beautiful set complete with a unique floor design that imitated an ancient Scottish scroll. Additionally, the special effects and added dance sequences were a welcome update.

“I was surprised at how out of the box we were able to make the play look and feel, a really fresh look at Shakespeare,” Norris said.

“I found a newfound respect for people who do community theatre all the time,” he said. “A massive amount of work goes into it, not just to put together a show, but a good show, one that’s entertaining, that people want to see.”

“We really work hard to make sure our productions are top quality,” Kaplan agreed. “You don’t have to go to Chicago for a great night out and a great night of theater. We want to really engage our community as much as possible, and to elevate our theater to a regional destination theater.”

Norris discovered an unexpected, healthy way to volunteer his time for CST: to be an audience member.

“The best thing being involved has done for me is made me a better patron of the theater,” Norris said. “I’m definitely going to go see shows in the future and support friends I’ve made, see the excellent work they produce. That’s one of the things local theaters struggle with, is maintaining a consistent audience. I’m definitely part of that audience now.”

People like Henry, Kaplan, Norris and so many more are the ones who keep CST’s doors open.

“If it weren’t for our volunteers, we wouldn’t exist,” Kaplan said. “We’re always looking for more hands. If it’s even a thought in your mind, do it, especially if it’s something that’s out of your comfort zone. Being uncomfortable is the only way you can grow as a human,” he added. “If you’re uncomfortable, if you’re afraid, I guarantee it’s not going to be as bad as you think. In the theater, we’ve maintained a standard to be as welcoming as possible. If you want to volunteer to give back to your community, this would be a really fun, inclusive way to give back. Or you can see some really great theater at no cost except for an hour or two of your time.”

CST’s 65th year promises to be another showstopper, with its community’s support.

“The fact that this theater’s been in existence for 65 years and is community-supported is unheard of,” Kaplan said. “My hope is we set this one up so that we can celebrate our 100th year someday. That would be such a milestone, and a testament to the Valparaiso community.”