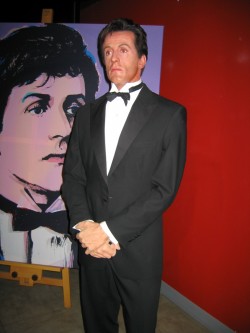 Once upon a time, the action movie universe was dominated by Sylvester Stallone, Arnold Schwarzenegger and Bruce Willis. They owned tinsel town. Actually, they franchised it – and Planet Hollywood became a part of our solar system. But then time kept marching on. Age set in. Scripts were so bad that not only could their star power not carry it, but their careers were getting sucked down the gravity well and left to supernova.

Now Planet Hollywood is a meteor and the three were road off into the sunset, begrudgingly.

Lately, like the Balboa / Creed 1, the trio started to pick themselves off the mat and get back into the fight. And I’ve watched their offerings. Some were worth renting on DVD. Others, well…

And then something happened.
Somewhere along the line the three realized they could channel what was left in their collective tanks and make a movie that would entertain the fans one last time. With Stallone co-writing (remember: Sly did write all the Rocky movies – including the original!), directing and making a few phone calls, the crew rounded up every action hero they could muster. They got Jason Statham, Jet Li, Mickey Rourke, Dolph Lundgren and then filled in the gaps with legendary fighters and entertainers: Randy Courte, Stone Cold Steve Austin…and turned the movie into one big party.

Better than that, they built a community their fans would want to be a part of! The result: look who’s back on top. The Expendables opened as the #1 movie of the weekend its opening weekend.

And you can bet Van Damme, Snipes, and Seagal are kicking themselves for not joining in (if Wikipedia is accurate). Here’s to a sequel!

Regardless of whether you love or hate over-the-top action movies, marketers could learn a thing or two from The Expendables.

1) The cast of the Expendables were honest about who they were, what they had to offer, were realistic about their expectations and worked together. Stallone and company didn’t try to pass themselves off as 20-somethings who could run 4-4 40s.

2) They were open about their stage in life and what they wanted to do. And they went to make something fun that their fans would like. And if it played a little on the nostalgia, then let it play a lot on nostalgia.

3) The marketers for the Expendables made materials to reflect this event. They knew their market and went after them. Check out their Facebook page.

And if that isn’t social media, then I don’t know what is.

In the end, whether it’s social media marketing or traditional marketing, it comes to reaching your target market. And whatever it takes to reach them.

I’m just hoping Stallone and Lundgren do a “Balboa / Drago” reenactment in the movie.