Valparaiso residents didn’t have to visit the local planetarium if they wanted to get a good look at some stars Sunday night. All they needed to do was head over to Duesenberg Recital Hall in the Valparaiso University Center for the Performing Arts, where local stars took the stage and took their turns to shine before a packed house.

Gregg Kovach, executive director of local radio station WVLP, says that the evening’s event was one of two major fundraisers for the radio station. Their annual Hog Roast being the other. This year’s concert, the fourth annual Stars Over Valpo event, saw the continuation of an idea of Paul Schreiner, who is one of the co-founders of WVLP.

Looking for ways to raise money to cover the station’s operating expenses, Schreiner had the idea to throw a show featuring local artists.

“The idea really took on a life of its own when we met for a committee meeting,” said Gregg. “Steve Cronk came up with the name, but we didn’t deviate much from Paul’s original idea of a fun, fast-paced musical revue.”

Local artists volunteer to donate their time and talent to entertain local residents, and tickets for the show are sold for $10 - a tremendous value for an evening of entertainment.

“I think that each year, we get better and better. We fine-tune the line-up, switch things around... Nothing big, just subtle tweaks to try and keep it fresh and make it entertaining for the good people who come here to help support local radio,” said Gregg.

“We are looking to make around $4,000, that would be ideal. The theater seats just over 200 people, and we hope to see each and every seat full.”

The presentation featured several types of music, from folk to rock, with some comedy thrown in for good measure.

Featuring 22 local acts, with a brief intermission, this years’ entertainment was designed to move quickly.

We spoke with Mark Rongers and daughter Corey Girnus, of group Mr. Rongers Neighborhood. Their band features mostly acoustic covers of artists such as The Pretenders, Hendrix, Jethro Tull and many more.

“John King approached me two years ago. He told me about Stars Over Valpo and asked me if I’d like to do something, and we were happy to be part of it,” said Mark, who - along with daughter Corey - closed this year’s show with not just music, but music that also carried a message.

“We thought about it long and hard, and we decided to do a little song by John Lennon: All You Need Is Love,” said Mark.

“We want to send people out on a high note,” said. Corey. “We want them to leave happy.”

Robert and Kelly Berquist of Portage made the drive out to Valparaiso to help support local radio, but they admit to having a vested interest in the event.

“Our son was performing here tonight,” said Robert. “He’s the drummer for The Code Names.”

“WVLP is absolutely fantastic. The exposure they give to local musicians, all the value they give to the community. They just do a fantastic job,” said Kelly.

Though they were understandably partial to the performance by The Code Names, they also enjoyed performances by Hot Rod Heathens and Thanks Again.

You can listen in to WVLP, streaming live over the worldwide web at www.wvlp.org. 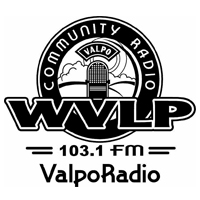