Publication of Summer 2012 Issue of VFR 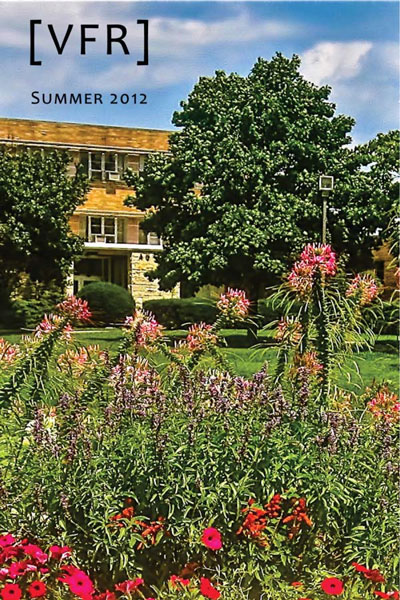 I am delighted to announce release of the Summer 2012 issue of Valparaiso Fiction Review, the national (international) literary journal published by the Department of English and Christopher Center for Library and Information at Valparaiso University. This issue of the journal contains compositions of short fiction by David Meischen, Megan M. Erwin, Susan Solomon, Marysa LaRowe, Corey Mertes, Amie Whittemore, and Joe Ponepinto. The cover image of the new issue also exhibits a photograph of mine that represents a farewell tribute to Huegli Hall, the building where I have had my office the past 25 years, editing Valparaiso Poetry Review and Valparaiso Fiction Review. Its service will end this month as many of the departments in Arts and Sciences move to a newly constructed office building, and Huegli Hall will be demolished.

I would like to take this opportunity to thank the assistant editors for this issue: Emily Bahr, Ethan Grant, Juliana Kapetanov, Gregory Maher, Mary Morales-Rivera, Rob Onofrey, Ellen Orner, Jeremy Reed, Ian Roseen, and Rebecca Werner. I wish great success in the future for those graduating seniors among the student editors. I also appreciate the wonderful work of co-editor Jon Bull, especially for his expertise on electronic publishing, responsible for the online appearance of VFR.

Jon and I invite everyone to examine this second issue of VFR to read the fine stories, and we encourage all to pass along word to others who might be interested. In addition, I remind authors that VFR is now considering submissions for the Winter 2012 issue.

Note: if possible, I believe the journal is best viewed in the Google Chrome of Safari browsers: http://scholar.valpo.edu/vfr/