A Musical Tribute to the American Hero from SSO 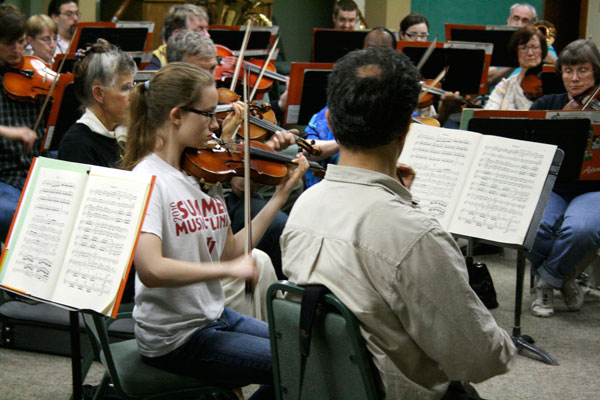 Join the South Shore Orchestra in an evening of musical tribute to the American Hero, Wednesday evening May 23, 2012, at Ivy Tech Auditorium Theater, 7 PM. Music will be infused with the patriotic spirit and memorial reflection timely to this week of honoring those who serve and have served our country as well as those whose contributions have generated a truly American tradition.

Music includes American Salute by Morton Gould in which youʼll detect a strain of When Johnny Comes Marching Home within its framework. Mark OʼConnorʼs 20th century Appalachian Waltz will add a bit of bluegrass and folk sound into the mix embracing the growth of a truly homegrown Americana sound. James Hornerʼs score for Apollo 13 will remind us of the inspired drama of those noted American heroes in space while the Theme from Spiderman by Danny Elfman will set the tone for the new super hero fantasy set to open this summer. Bob Lowdenʼs medley of salutes to all the armed services will set a moving ceremonial tone of reflection for Memorial Day.

The orchestration of Charles Ivesʼ Sympnohy No. 2 will surprise many with its melange of familiar tunes woven throughout this innovative masterpiece. Youʼll hear a bit of Stephen Foster and Beethoven among other european classical music and american folk tunes from our collective subconscious, emerge into a magnificent symphony with an unusual surprise ending.

Active duty service will be admitted free-veterans will be offered a reduced rate of $8. Adult tickets are $15. Seniors and students are $10. and children under 12 are free. Tickets are sold at the door which opens at 6:30. Tickets can be secured by calling Pete Brannen at 219-464-7816. Ivy tech Auditorium Theater is conveniently located at 3100 Ivy Tech Drive in Valparaiso, east of 49. Ample, well lit parking is available.