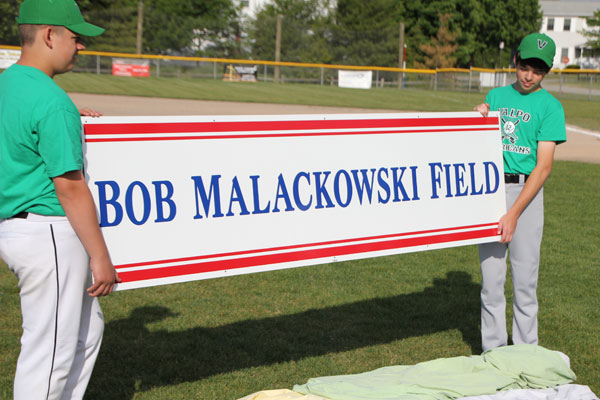 “In recognition of the fact that Bob Malackowski has been so hands on with this organization for over half his life, we have a special momento we want to give to Bob in recognition for what he has done,” Dan Sherman told a small crowd of players, families, and community members at the official dedication of Valparaiso Americans’ newly constructed field. “This field will now be referred to as Bob Malackowski Field.”

Malackowski has been a longtime leader in the Valparaiso Americans organization, someone who has given countless time and resources to a league that started with 45 players and has grown to host 500 this season.

“He started the league in ‘74,” explained Rob Zborowski, current President of the Valpo Americans Board. He told the story of how Malackowski, along with a few other local businessmen, bought out the property and started to build fields.

“They took in a lot of donations over the years, built up an account and invested it, and the account turned into a pretty nice nest egg,” he explained. It’s estimated the field cost somewhere in the neighborhood of $100,000, a culmination of efforts from a boatload of volunteers and private donations.

“My dream has always been to do things with this park,” Malackowski explained to the crowd. While he deferred credit to the group currently running the day-to-day operations of the Valparaiso Americans - Zborowski, Sherman, Rob Behrend, and Brian Rafferty- Malackowski still has a foresight to expand the program further than the five baseball fields in the complex he helped create from the ground up.

“I have a vision to expand the parking lots, and possibly build a field house so we have a place for kids in this community to go in the winter months, Malackowski said. “This is a start, and I hope the rest of you people, you younger ones, continue to do all you can do. Thank you all very much.”

The field, located where former Pop Warner football field used to be, is the complex’s largest and will be primarily used for the Junior Division of Valparaiso Americans, players aged 13-17. Previously, Valpo Americans had rented out the Kiwanis Field behind Thomas Jefferson Middle School or the Valparaiso University field for the program's older players. Now that is no longer an issue.

Valparaiso Americans is a nonprofit organization run solely by volunteers. There are currently approximately 500 players involved in Valparaiso Americans, forming over 40 teams between the ages 4 through 18. For more information on the organization, visit www.valpoamericansbaseball.org or contact Rob Zbrowoski at boilerrmz@aol.com.