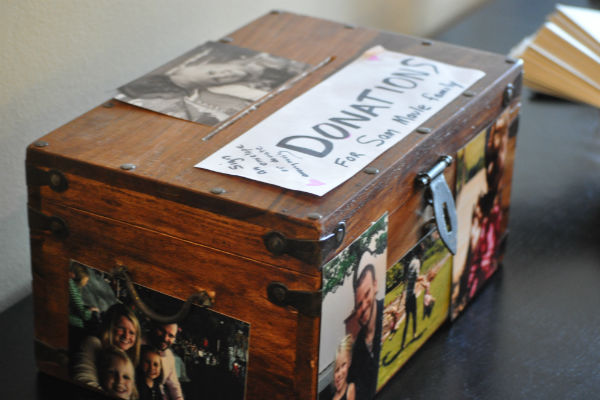 Something truly amazing happened at the Venue in Downtown Valpo. A charity event, sponsored and attended by the citizens of Valparaiso, was thrown to raise money for the Maule Family.

Sam Maule lost the love of his life to a terrible car accident, in which his daughters Jaidyn and Neilah were seriously injured. The community came together to support the family in a time of need.

As the Venue filled with friends, family and even those who didn't know the Maule Family, the feeling of selflessness was overwhelming.  A donation box set up by the door was in constant use, while raffles and a silent auction were being perused by visitors.

The usher, Simon Barrios, introduced me to the three kindred spirits who had planned the entire event – Rachel Sawaya, Kim Rymer and Nicole Bissonnette. Sawaya was more than happy to explain how she set up the event.

“The accident happened on July 19 and I didn't start planning long after that. I knew I wanted to do something for the family,” she said. “I made a Facebook page and over 65 people RSVP'd. However, with our fliers and Sam being so loved in the community, a lot more people know about it now.”

As I gestured to the silent auction forms and raffle tickets, Sawaya explained them to me in more detail.

“We have over 35 silent auction and 12 raffle items from local businesses! Anything that isn't claimed or bid on will go to the event on September 12th at 'Golden-Tech', where Sam works.”

Some items included gift cards to Pestos, JCPenney and Bistro 157. Bottles of fine wine and hair products were also up for auction.

Nicole Bissonnette, owner of both Bistro 157 and the Venue, knows Sam personally. He managed another restaurant in town and dines at the Bistro often. Bissonnette, however, was stricken by the community of Valparaiso these past weeks.

“This happened at 7:30 in the morning; your life can change in a moment. When the chips are down, you see what the community is made of,” she said. “The community has come together to support Sam, believe in miracles and the value of community it amazing.”

The Benefit itself was catered by multiple restaurants, specifically Bistro 157, Don Quijote, Silver Spoon and Bon Femme. Sushi, bruschetta and deviled eggs were among the many delectable food choices, while a cash bar served a variety of wines and beers, while children could have water or soda. The children’s clothing boutique, Matilda Jane, was also set up. Kim Rymer, the Matilda Jane Trunk-keeper, was taking orders from guests as they checked out the clothes.

“Neilah has beaten the odds – she just had skull surgery – and I believe it is the community willing the family strength,” Bissonnette said. “Her steps towards recovery are nothing short of miraculous.”

“We want to relieve some financial burden for Sam, from the medical bills,” Sawaya added. “The generosity and outpour of love from the community has been astounding.”

As I walked out of the Venue, stopping to pick up a silicon bracelet with “Love – Neilah & Jaidyn” on it, I could feel the generosity and love of the residents of Valpo. It is truly amazing to live in such a tightly-knit community.

To keep up with the Maule Family, add the official Maule Family Benefit Page on Facebook!

Follow this link for a complete photo gallery of the benefit!!!