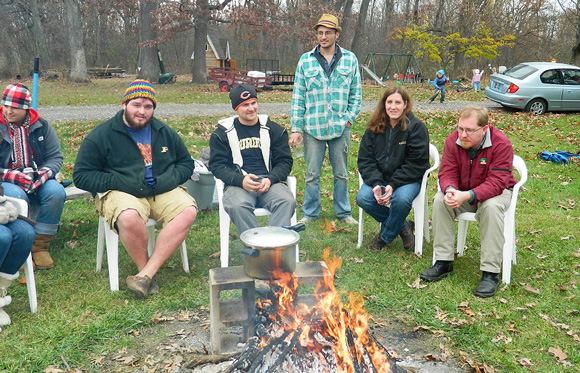 McCall, a Liberal Studies major and a Latin American Studies minor, is a student in Kincaid's Indigenous Heritage in Latin America class. As students in the class learned about Pachamanca, a type of Andean food preparation that is a celebration of community and the earth's bounty, they decided that this was a great opportunity to organize an "Andean Thanksgiving."

The PNC students will share their Andean Thanksgiving experience with students at Yost Elementary in Porter, Scott Middle School in Hammond and the Valparaiso International Center.

The class decided to call their experience an Andean Thanksgiving because they wanted to bring together the best qualities of the North American Thanksgiving tradition - a cornucopia of the earth's bounty with the fellowship of community and family - with the similar Pachamanca experience.

The PNC students worked with members of the region's Peruvian community to host a demonstration of Pachamanca cooking. Pachamanca translates to "earthen pot." It was developed by indigenous Peruvian people as an adaptation to an often brutal environment and geography.

Pachamanca cooking requires a team effort and must be done quickly to keep the rocks from cooling.

Enjoying the Pachamanca feast were the PNC students and their families, along with members of Peruvian community and families, board members of Valparaiso International Center and other guests.

The entire event was filmed so that it could be shared with students at Yost Elementary School in Porter on Nov. 21, at Scott Middle School in Hammond on Nov. 27 and will be presented as part of the Fourth Friday Series at the Valparaiso International Center on Nov. 30.