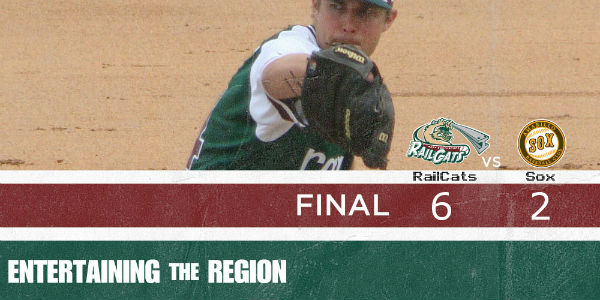 Ari Ronick delivered his third straight quality start and Gary scored five runs in the middle innings in a 6-2 win over Amarillo on Tuesday night. The RailCats (11-7) remain one game back of first-place Wichita in the Central.

The Sox got on the board in the first inning against Ronick. After back-to-back singles led off the inning, David Peralta hit an RBI single to right with one out to give Amarillo a 1-0 lead. With runners on the corners, Ronick was able to escape further damage by getting Joe Weik to bounce into a 3-6-1 double play. The RailCats defense turned a season-high four double plays on the night.

The RailCats responded in the top of the second. Brian Kolb was hit by a pitch to lead off the frame and stole second. With two outs, Chase Tucker singled back up the middle to score Kolb and tie the game at one.

Gary grabbed the lead for good in the fourth. Steve Liddle led off with a walk. With two outs, Ryan Miller brought him home with his first hit as a RailCat, a single through the left side to give the ‘Cats a 2-1 lead.

In the fifth, the RailCats put two runners on with one out. Liddle drove a single to center to score Mike Massaro and with two out Drew Martinez delivered a base knock to bring home Craig Maddox and make it 4-1. Cristian Guerrero piled on with a two-run double to right in the sixth inning.

Ronick pitched five straight scoreless innings after the first inning run, but loaded the bases with two out in the seventh. He walked Chris Valencia to bring home a run and Taylor Sewitt came on in relief with the bases loaded. Sewitt got Chris Grossman to line out to end the inning and avoid further damage.

Ronick (3-1) held the Sox to two runs on nine hits in 6 2/3 innings with one walk and five strikeouts. While winning his last three starts, the lefty has held opponents to four runs in 19 2/3 innings, a 1.83 ERA.

Tucker led the way with two hits while Massaro extended his hit streak to 14 games and he has reached base in all 18 contests.

The series finale/rubber match will be on Wednesday night at 7:05 as the RailCats wrap up the road trip. Right-hander Morgan Coombs (1-0, 7.30) will take the hill for Gary against Sox righty Matt Larkins (2-1, 5.40). The radio broadcast beings at 7:00 on 89.1 FM The Lakeshore and www.railcatsbaseball.com.