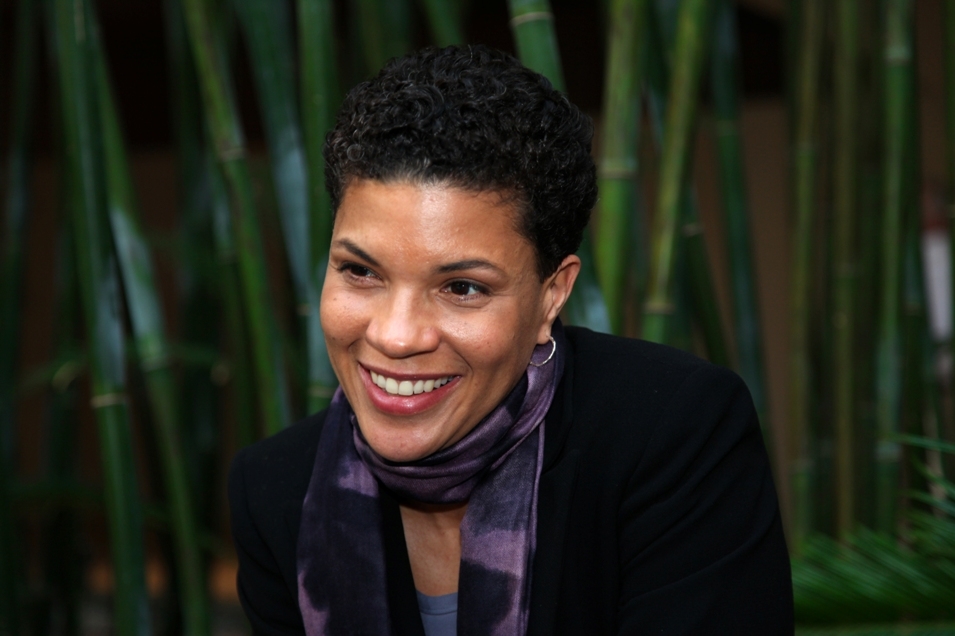 As the much-anticipated signature event of the campus’s One Book…One Campus…One Community reading initiative, Indiana University Northwest welcomes Michelle Alexander, author of The New Jim Crow: Mass Incarceration in the Age of Colorblindness to campus in January 2015.

Alexander, a highly acclaimed civil rights lawyer, advocate and legal scholar, will give a lecture and invite questions and answers from the audience from 2:30 to 4 p.m., Tuesday, Jan. 27 in the Savannah Center Gymnasium. A book signing and opportunity to meet the author is planned from 4 to 5 p.m.

Alexander’s book, The New Jim Crow is a stunning account of the rebirth of a caste-like system in the United States, one that has resulted in millions of African-Americans locked behind bars and then relegated to a permanent second-class status — denied the very rights supposedly won in the Civil Rights Movement. Since its publication in 2010, the book has appeared on the New York Times bestseller list for more than a year; been dubbed the “secular bible of a new social movement” by numerous commentators, including Cornel West; and has led to consciousness-raising efforts in universities, churches, community centers, re-entry centers and prisons nationwide.

Alexander currently holds a joint appointment at the Kirwan Institute for the Study of Race and Ethnicity and the Moritz College of Law at The Ohio State University. Prior to joining the Kirwan Institute, Alexander was an associate professor of law at Stanford Law School, where she directed the Civil Rights Clinics, designed to be an introduction to civil rights litigation and advocacy for students.

In 2005, she won a Soros Justice Fellowship, which supported the writing of The New Jim Crow. The book has received rave reviews and has been featured in national radio and television media outlets, including NPR, The Bill Moyers Journal, the Tavis Smiley Show, C-Span Washington Journal, among others.

For several years, Alexander served as the Director of the Racial Justice Project for the American Civil Liberties Union (ACLU) of Northern California, where she helped to lead a national campaign against racial profiling by law enforcement. While an associate at Saperstein, Goldstein, Demchak & Baller, she specialized in plaintiff-side class action lawsuits alleging race and gender discrimination.

Alexander is a graduate of Stanford Law School and Vanderbilt University.

IU Northwest chose The New Jim Crow as its third installment for its annual One Book…One Campus…One Community reading initiative, which encourages the campus and the greater community to collectively examine issues explored in the chosen book. Throughout the academic year, the campus and surrounding community are encouraged to the join the discussion, participate in events, and reflect on the themes and learning points. The chosen book is integrated into classroom curricula, giving IU Northwest students, faculty and staff the opportunity to reflect on the diversity of themes.

In anticipation of the author’s lecture, a community-wide book discussion is scheduled for 6 to 7:30 p.m., Tuesday, Jan. 20 at St. Paul Missionary Baptist Church, 2300 Grant Street in Gary. Those interested in learning more about the book discussion may contact Kathy Malone at (219) 980-6701 or kalmalon@iun.edu for more information.

To learn more about the IU Northwest One Book…One Campus…One Community reading initiative, visit www.iun.edu/onebook. The book is available for purchase at the IU Northwest Book Store, as well as through www.amazon.com.