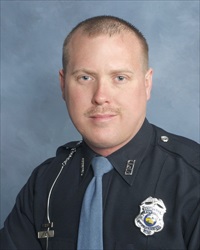 Sgt. Simpson is a graduate from Ivy Tech with a degree in Criminal Justice and is a graduate of Chesterton High School. He is also a graduate of the Police Executive Leadership Academy. Jerame currently is a K9 handler for the department and has earned numerous awards for his service with the department including the Indiana Association of Chiefs of Police “Officer of the Year Award” in 2012.