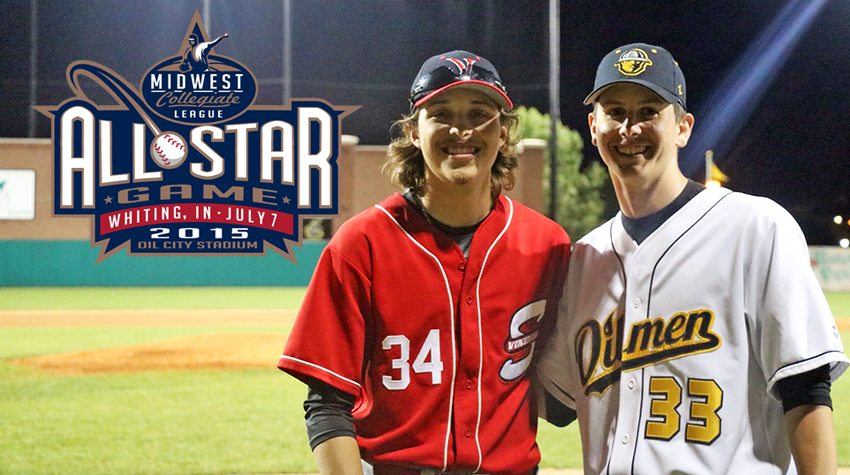 Peregrine right-hand pitchers Jimmy Skiff (Dyer, Ind./Andrean) and Matt Sandoval (Highland, Ind./Bishop Noll) both made appearances on the mound for the South Team, which topped the North squad for the fourth consecutive season, 10-3.

Skiff, pitcher for the Northwest Indiana Oilmen, was named the starter for the South. Skiff pitched one inning, struck out one, walked one and didn't give up an earned run. The South scored three runs in bottom of the first inning to put Skiff in position to get the win.

“It feels good," Skiff said. "It wasn’t as I expected it to go, but after I got the nerves out of the way I settled down.

“It was an honor to play for the All-Star Game.”

Entering the All-Star game, Skiff is 3-1 with an 1.48 ERA and 20 strikeouts on the season for the Oilmen.

“I just want to continue to get better, get ready for next spring and be at the top of my game,” Skiff added on what he wants to accomplish the rest of the summer.

Sandoval, pitcher for the Southland Vikings, made his appearance in the eighth, where he pitched a 1-2-3 inning and struck out one.

“It was a good experience and I had a lot of fun,” Sandoval said. “It felt good to get my spots.”

Sandoval has made four starts for the Vikings this season and has a 1.50 ERA with 11 strikeouts.

“I want to remain one of the top pitchers in the league and keep working to develop as a pitcher,” Sandoval said on his goals for the rest of the summer season.

Sandoval will enter his junior season for the Peregrines in 2015-16, while Skiff will be a sophomore for the Peregrines. Purdue Calumet had a breakout season with both players on the staff in 2015, when the Peregrines finished 23-16 overall and made their first appearance in the Chicagoland Collegiate Athletic Conference Tournament.