A Valpo Life in the Spotlight: Linda Schonbachler 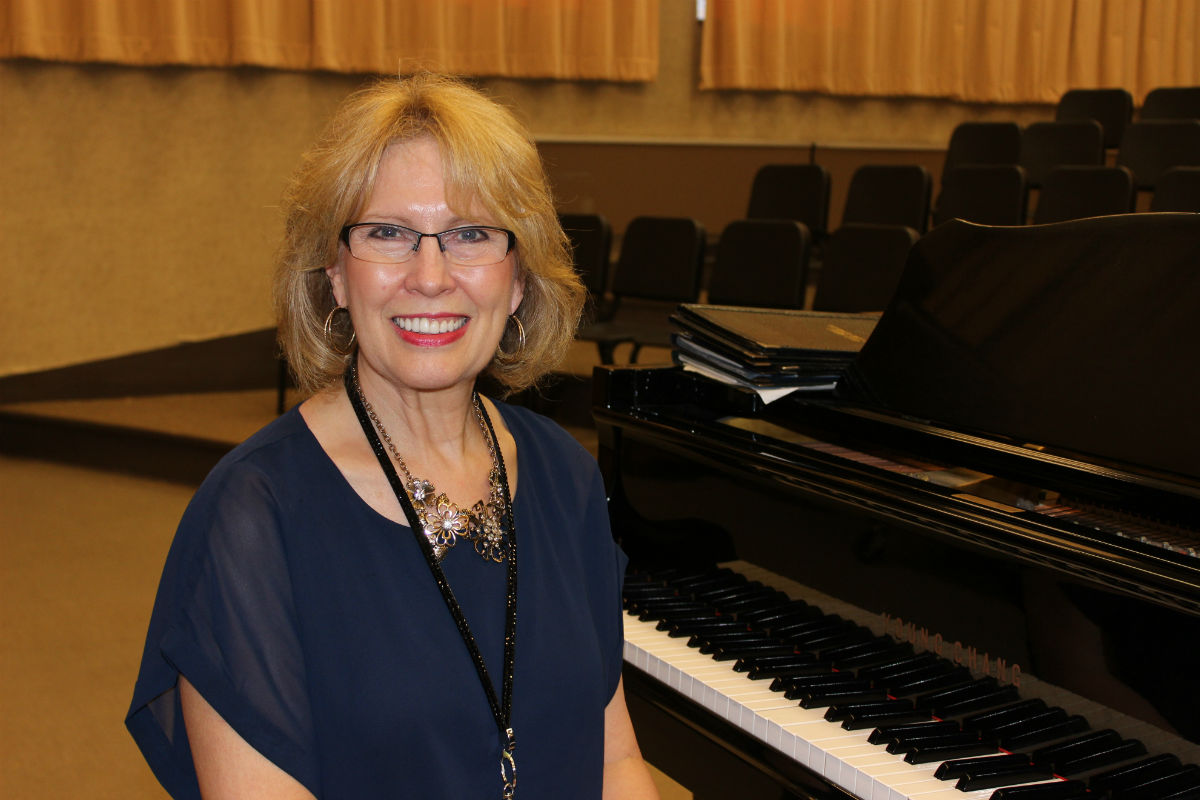 Not very many people can say they were playing piano at age three and only one person can say they have been Choir Director at Valparaiso High School for twenty-seven years. Linda Schonbachler, nominated for Valpo Life in the Spotlight because of her outstanding dedication to the choir program at VHS, has quite the interesting and musical story to tell.

Musical talent clearly runs in the family, with all five of Linda’s siblings being singers and performers as well. Linda’s father was a tenor, her mother gave piano lessons and was a singer, and her grandmother was a concert pianist. Carrying on the musical tradition, Linda’s son is also a singer and her daughter is a professional cellist in Las Vegas who was featured on one of Beyonce’s CDs.

Joining choir in high school was no question for Linda, who says that Mary Faucette, her high school choir director, was like no other director she would ever have. Linda got her undergraduate at the University of Kentucky, with a piano and voice major. She then went on to get her masters at Butler University. She also sang in professional ensemble Collegium Musicum, performing all over the world. Linda taught for ten years in the Kokomo area, two of which at Indiana University, teaching Music Appreciation, directing IUK singers, and directing musicals.

With her stellar repertoire, Valparaiso’s music program knew they had to have her. She was recruited to direct their then three choir programs, which she later converted into five programs, more than doubling the participants. Linda’s concert choir has performed at Carnegie Hall three times while performing in New York twelve. They have traveled overseas to Italy, France, England, Switzerland, the Czech Republic, and Germany.

At the Rose Festival in Wales, they performed for Princess Diana. They were also asked to represent the state of Indiana to perform for veterans on Omaha Beach for the anniversary of World War II. The concert choir has won the state finals three times and has always been a state finalist, usually finishing in the top five.

For Linda, one of the most rewarding parts of her job is having her students come back and tell her what an impact her choir program had on them. For many students, music becomes their career, singing on Broadway, recording CDs, performing on cruise shows, or becoming university music professors. Fifteen of Linda’s former students became choir directors themselves.

Olivia Chappell, senior at VHS, said, “Mrs. Schonbachler is a wonderful choir director! It really inspires me how devoted to her job she is because what she does takes a lot of time and effort. Yeah, she works us hard, but I know it’s because she sees so much potential in our musical talent, which means a lot to every single one of us. These past four years Mrs. S has taught me more than words can even describe. I am forever grateful to have had the privilege to work with the best of the best.”

Rachel Gebhart, VHS senior who will be singing for her fourth year with Linda, said, “Her incredible amount of passion for what she does, and the goals she believes we can achieve, push us to be the best we can be. The effort she puts in every day, at school and outside of school, is absolutely outstanding. She’s the backbone for the excellence that the VHS Choir program has.”

With such an apparent impact on her students, it is no wonder Linda loves her job. “I get to reach students at an emotional level that many teachers do not because we talk about what the lyrics mean to them,” explains Linda, “We talk about how we want to move the audience by what we sing. It’s a whole different ballgame and such an intimate and special thing we get to do.”

For Linda Schonbachler, going to work every day is something to look forward to. Not only does she have an impressive history of musical success, but she also has a never ending list of students positively impacted by her excellent teaching. With all that in mind, there is no question why Linda was nominated to be a Valpo Life in the Spotlight.