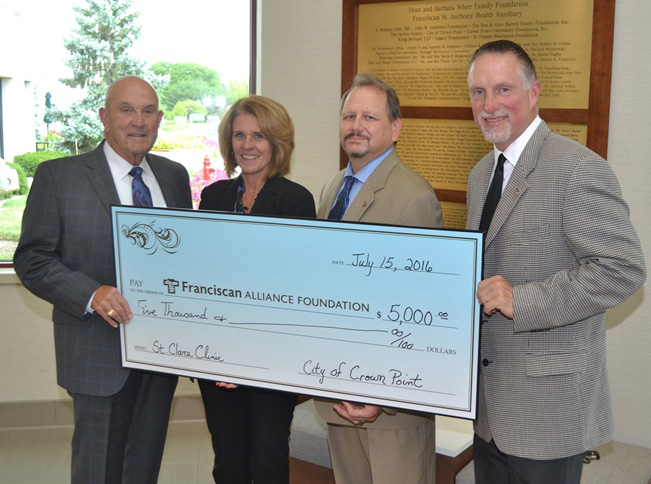 Crown Point Mayor David Uran, right, presented to Franciscan St. Anthony Health-Crown Point on July 15 the last of five, $5,000 installments the city has made annually to benefit the hospital’s Capital Campaign, which raised funds for the construction of a new St. Clare Health Clinic at 1121 S. Indiana Ave., and a Neonatal Intensive Care Unit at the hospital, 1201 S. Main St.

“The city has a good working relationship with the hospital and we look forward to the next chapter in providing services and opportunities, not only for Crown Point residents, but for others in the region who need an extra helping hand,” he said.

Hospital president and chief executive officer Barbara Anderson, second from left, said the hospital is “very excited to have the city’s support” and that the money will be used to expand St. Clare’s services. The Capital Campaign, which was led by Joseph Allegretti, left, raised some $4.2 million in pledges during a more than two-year period from various community sources, benefactors and fund-raising efforts.

The clinic provides free primary health care, a prenatal assistance program and other referral services for underprivileged area residents. Also shown is Tony Englert, director of the Franciscan Alliance Foundation. For more information on the clinic and its services, call (219) 663-2160.