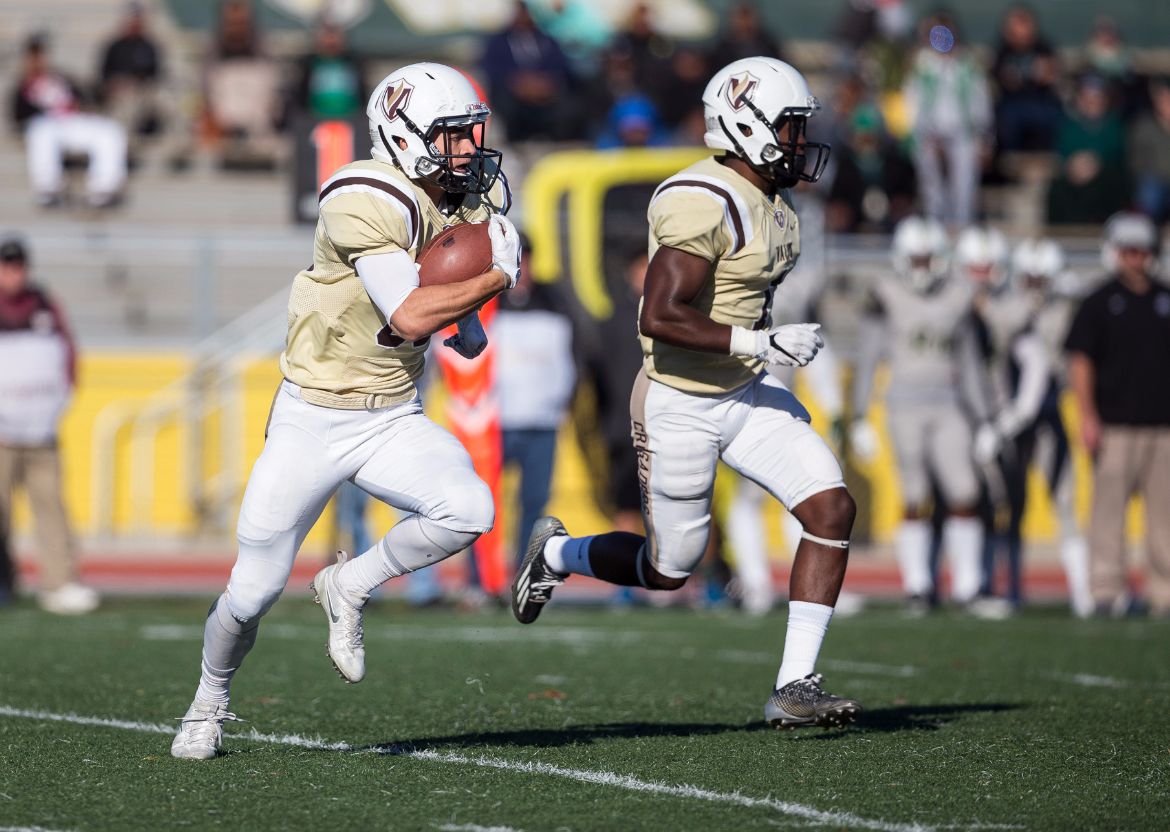 Gessinger was named to the all Pioneer Football League second-team, based on selections made by the league’s coaches. In addition, six Crusaders earned all-PFL honorable mention.

Snouffer ranked fourth in the PFL with 9.3 tackles per game and was one of four PFL players who reached the 100-tackle mark (102). He also totaled four sacks and two fumble recoveries.

Hughes finished second among PFL defensive backs with 7.6 tackles per game and 84 total tackles. He tied for eighth among all PFL players. Hughes added two interceptions and six pass breakups.

Doepke made a return to the field after missing back-to-back seasons with injuries. He had 41 tackles, 18 solos. Morgan led the team and ranked 10th in the PFL in rushing at 57.6 yards per carry. He was seventh in the PFL in all-purpose yards at 94.0 per contest. Catrine led Valpo in receptions per game with 4.7, placing seventh in the league. He averaged 11.8 yards per catch and hauled in three TDs.

Gessinger, Catrine, Morgan, Snouffer and Hughes are all expected to return next season for a Valpo team that retains the bulk of its key players from this year’s four-win season.

Twice is Nice: Lindfors Layup Lifts Valpo to Second Buzzer-Beating Win in Last Nine Days
When Valparaiso University women’s basketball player Georgi Donchetz prepared to inbound from the sideline with 0.8 seconds remaining in regulation of a tied game on Friday, her goal was simple.

“A win,” she said afterward.

Donchetz helped the Crusaders achieve just that, lofting a perfect pass to center Amber Lindfors (Elk Grove Village, Ill. / Elk Grove), who caught the ball in the paint and finished the layup to lift Valpo to a 70-68 victory over Liberty, the second buzzer-beating win for the Crusaders in the last nine days.

“I don’t remember shooting the ball, but the pass was perfect,” Lindfors said. “It was a great pass.”

The final shot may be a blur in Lindfors’ mind, but it’s one that many will remember for years to come.

Junior Dani Franklin (Cedar Rapids, Iowa / George Washington) turned in another Franklin-like performance, notching her first double-double of the season with 29 points and 11 rebounds on 8-of-13 shooting, 8-of-8 at the foul line and 5-of-8 from beyond the arc. But on the game’s final play, Valpo head coach Tracey Dorow elected to give Lindfors the opportunity.

“Everybody I know expected Dani to take the last shot, which is why we had her screen,” Dorow said. “We hoped they would all stay with her because they’ve seen the film of our other games. Our players trusted what was going to happen. We had Amber as our only option, otherwise I was going to take a timeout. I give Dani credit for setting a great screen. Georgi made a perfect pass; it couldn’t have been any better.”

The Crusaders have won back-to-back games, three of their last four and hold a 3-2 record through five contests. They collected a victory despite being outrebounded 45-43 by a Liberty team that pulled down 25 offensive boards.

“I wish we would have rebounded better so it didn’t come down to that,” Dorow said. “We had some key turnovers that led directly to baskets for them that allowed them to gain some momentum. I thought Liberty did an outstanding job battling and rebounding. We need to focus more on that, but I’m going to give them credit because that’s one of their strengths.”

Lindfors remained Valpo’s rebounding machine, gobbling up 12 boards to match a career best and establish a new career high against Division I opposition.

While Franklin and Lindfors continued to rack up points and rebounds respectively, sophomore point guard Hannah Schaub (Brooklyn Park, Minn. / Park Center) did the same with assists. She dished out nine to tie a career high and set a new career watermark against a D-I team.

“We have great shooters, so props to everyone for the great shots,” Schaub said. “(Assistant coach John Motherwell) has really been emphasizing passing on the dot, so I’ve been trying to get it to put passes in the perfect spot.”

“I really enjoyed all of the time we got to spend outside the game, but during those two hours I don’t notice who is on the other bench,” Dorow said. “You just compete to win. I want to see my sister do well, but I’m able to put that aside for two hours.”

Other Notes
Franklin’s eight made free throws established a career high… Franklin’s five 3-pointers matched a career best set at Stetson this season…Valpo limited Liberty to 2-for-17 shooting (11.8 percent) in the third quarter… The game featured five ties and six lead changes… Donchetz matched a career high with five rebounds and finished with eight points, including 6-for-6 from the free-throw stripe… Freshman Caitlin Morrison (Glenview, Ill. / Glenbrook South) chipped in nine points, while Grace Hales (Cromwell, Ind. / Westview) had seven on 3-of-6 shooting.

Next Up
The Crusaders (3-2) will continue a four-game homestand on Wednesday at 7 p.m. as they welcome Evansville (0-4). The game will be broadcast on ESPN3, WatchESPN and the ESPN app. It can also be heard on WVUR, 95.1 FM Valparaiso, thesource95.com and the TuneIn Radio App. Links to live video and stats can be found on ValpoAthletics.com.