A Valpo Life in the Spotlight: Jacob Gomez 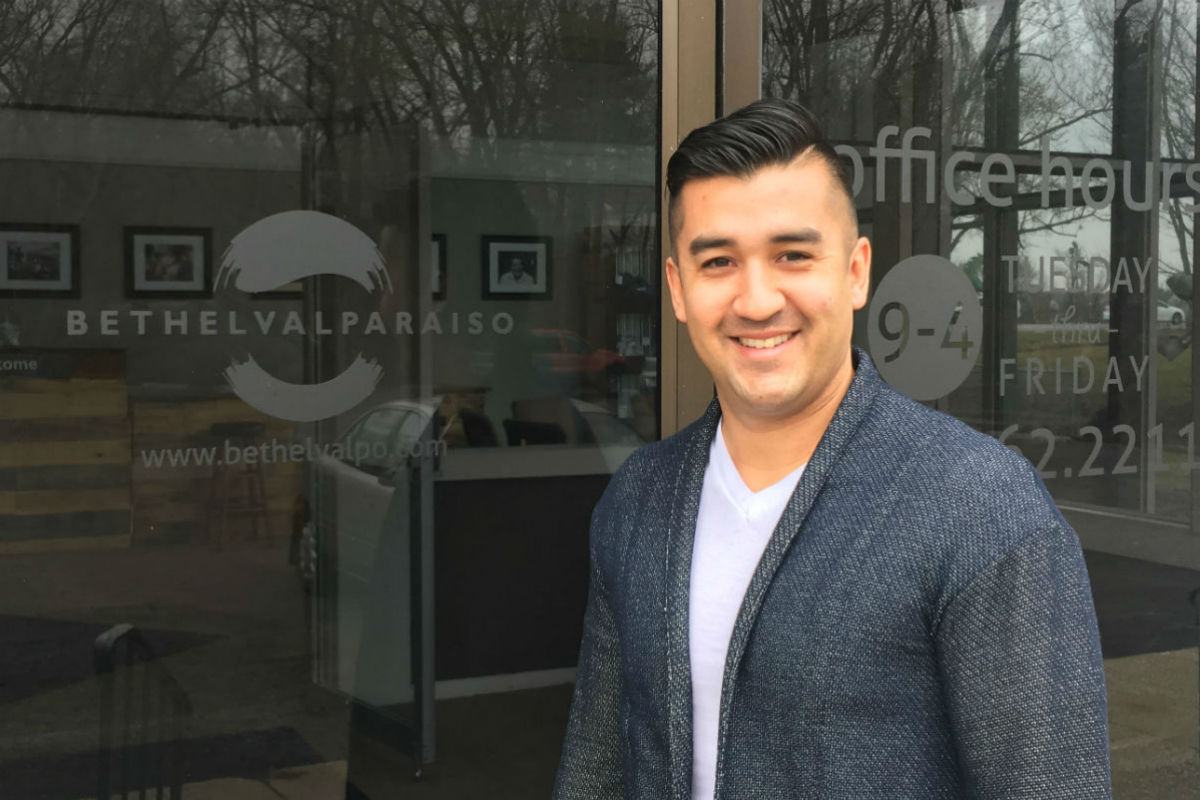 Making a Difference.” To get to his current position of Youth Pastor at Bethel Valparaiso Church, Jacob Gomez underwent a long journey of pain, uncertainty, love, and trust. His model he lives by “Making a Difference” is the one phrase that guided him on. Gomez is originally from Holland, Michigan, but he made his way from Michigan to Ohio, back to Michigan, and finally settled in Northwest Indiana.

In the second grade, Gomez remembers going up to his teacher telling her, “I’m going to be a preacher one day.”

At the young age, he was already on his way toward his career, attending Church every Sunday, then ‘playing’ Church and preaching to his sisters what he had just learned.

“I always thought that was pretty cool because, that’s what I ended up doing all these years later,” Gomez said.

Gomez was attracted to Valor Christian College in Columbus, Ohio for his ministry education thanks to the president of the college.

“I felt like what they offered was what I was looking for and was what I wanted to do,” he said. “And I was attracted by the president. I liked the style he had, his passion for ministry. I loved it and I wanted that passion.”

Gomez soon found his personal passion for ministry while pastoring to the youth ministry at a church in Michigan. He was there for eight years before relocating to Indiana to start over.

He said he went through some life changes and needed a new beginning.

Eventually, the community of Valparaiso, Indiana gave that to him.

“I had lost everything and then came here to start over,” he said.

“I thought it was just a transition for me, being here. I didn’t call it home for the first three years. I felt like this wasn’t home, part of it was not being in a good place in my life,” he explained. “It was like a whole new life here. I had to get new friends; I needed to get a new church, a new career. I literally started from scratch.”

Gomez began working in a group home and had gone back to school to Liberty Christian Academy to study psychology.

He then met inspiring person after inspiring person, developing friendships and relationships in the area, which eventually lead him to being hired in a behavioral clinic called Innovations in Learning in Merrillville. He was working with children with special needs, particularly autism.

It was at this clinic where Gomez met his now wife, Annelise, who is pregnant with baby girl, arriving mid-May.

In 2010, his growing new life then led him to attending a concert at Bethel Church, located at 552 W. Morthland Dr., where he heard they were looking for a Youth Pastor.

“At the time, in my heart I knew I wanted ministry, but I wasn’t done with youth ministry, so when he said that, it hit me strong, like, ‘Wow, I think I’m supposed to pursue this,’” Gomez remembered feeling when he heard about the job offer.

Gomez introduced himself to Kyle Felke, now the head Pastor at Bethel, and he was hired part-time to work with the children of the church.

After a year, in 2015, he became the head Youth Pastor, guiding the teenagers through their own spiritual and personal journey and finally succumbing to the feeling of home.

Gomez is also in charge of assimilation, which means he is the one who calls the new visitors to welcome them to the church, and oversees the ushers at the church. He spends Wednesday evenings with the youth group, as well as on Sundays. A few times of the year, he takes youth group members on their own retreats.

“I have been working with teenagers, if you count all the years, about 13 years,” he said.

Gomez and his wife enjoy finding the unknown, hole-in-the-way restaurants throughout the area, and spending weekends watching professional sporting games, especially the Chicago Cubs. They enjoy traveling and heading to Chicago, though soon their luggage is going increase to include a newborn girl named Eleena.

Like the pre-teens and teens Gomez works with now, his daughter will reach that age where she will start to find herself, her passions, and her own model in life.

Gomez believes his job as Youth Pastor, as well as his past job working with disabled children, and his future job as father-to-be, is helping people find that ‘gold’ within themselves.

“Not only finding gold, but helping them to realize, ‘Wow, I do have that gold in me, I do have potential,” he said. “That is why I love working with teens because they are figuring it out and I am able to come alongside of them and help them make a difference in their lives. That’s my model, “Make a Difference.” I even have that tattooed on my arm.”