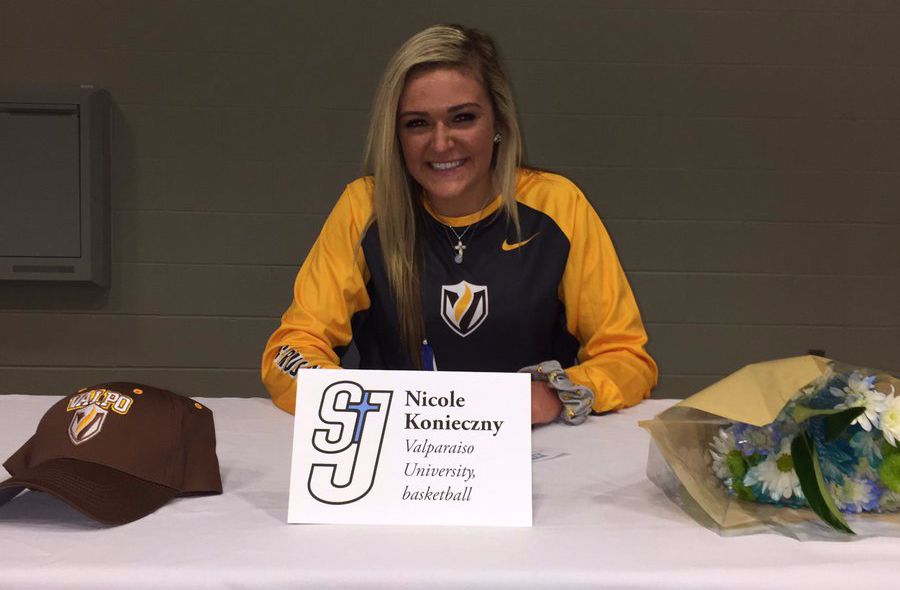 The Indiana Girls All-Stars will play a home-and-home series with Kentucky, plus two games against the Indiana Junior All-Stars. All four games will take place in the month of June. One of the All-Stars will be named Indiana Miss Basketball on April 27.

Indiana will look to extend its seven-game winning streak over Kentucky when the two teams meet at Bankers Life Fieldhouse on June 10 at 4 p.m. Central Time. The second game will occur on June 11 at Central Hardin High School in Elizabethtown, Ky. at 1 p.m. Central Time.

“She’s a competitor every time she steps on the floor,” Valpo head coach Tracey Dorow said after Konieczny signed her NLI in November. “She’s involved in every play. When you turn around, she’s diving for a loose ball or she’s getting a rebound and scoring. She’s passing to someone who’s scoring. She’s a kid that you might not notice being flashy, but she’s always right there.”

Women’s Golf Makes Seven-Stroke Improvement on Day 2 of Bulldog Invitational
For the second straight day, the Valparaiso University women’s golf team enjoyed its best round of the spring on Thursday at Windsor Parke in Jacksonville, Fla. as part of the Bulldog Florida Invitational. The Crusaders trimmed seven strokes off their Round 1 score by turning in a 323 in Round 2.

Thoughts from Head Coach Jon Haas
“This was an incredibly rewarding day to be on the course with these girls. They battled for two straight days. Today’s 323 was a significant step in the right direction as our conference tournament creeps up on us.”

Up Next
The Crusaders will next compete on Sunday, April 2 as they begin the Fort Wayne Spring Classic at Pine Valley C.C. in Fort Wayne, Ind.

Kapers is one of only two Horizon League players on the list, joining Milwaukee junior Daulton Varsho. The award is given annually to the top Division I collegiate catcher.

Kapers has cut down four of the six runners who have attempted to steal against him this season. He got his year off to a favorable offensive start when he launched a three-run homer in his first at-bat of the year on Feb. 17 at Western Kentucky.

Kapers threw out 32.7 percent of would-be base stealers last year as a freshman.

“He’s the best defensive catcher in the league,” Valpo head coach Brian Schmack said. “He was a game-changer for us last year. He controls the running game with his throws. He’s aggressive; he’s not afraid to back-pick. He’s a confident kid and he’s not afraid to voice his opinion, which is good because he’s usually correct.”

Valpo Defeats Duquesne in Men’s Tennis
The Valparaiso University men’s tennis team extended its winning streak to 11 with a 7-0 whitewash of Duquesne on Friday morning at the USTA Center in Orlando, Fla. The Crusaders won every set to sustain their dominance during the spring trip.

Next Up
The Crusaders have a pair of matches on their final day competing in Florida on Sunday. They begin the day by clashing with Liberty at 10:30 a.m. before facing off with Fairleigh Dickinson in the final match of the spring trip on Sunday at 4 p.m.