Celebrating the Class of 2017: Christopher Sherbak 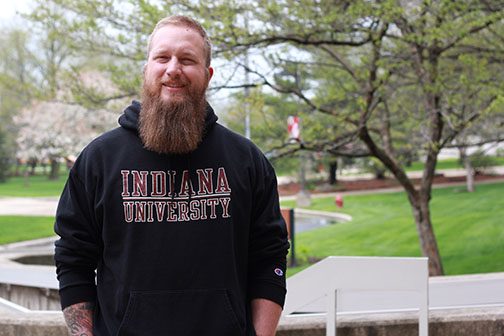 Christopher Sherbak, 31, of Portage, graduates this May with a bachelor’s degree in anthropology.

In 2013, after serving 12 years in the U.S. Army, Sherbak found himself facing a medical retirement. Unemployed and unsuccessful in finding a job, he decided to take advantage of his Post 9/11 GI Bill and begin his next chapter. He enrolled at Indiana University Northwest because it was close to home and affordable.

The field of anthropology had always beckoned him, ever since his childhood trips to the Field Museum in Chicago where he sat riveted by the exhibits, especially the one about the Northwest Coast.

“At this point in my life, I am lucky enough to be able to choose a major and occupation that I want to do, rather than just one to make money,” he says. “That enabled me to follow my passion within anthropology, and after many classes, I found a new interest in archaeology.”

Completing his degree came with significant challenges. With two young children and a wife, Corrie, who is also an IU Northwest student, finding childcare so they could both finish school is a juggling act. But if Sherbak had any trouble managing student, parental and spousal responsibilities, it certainly didn’t show in his academics. On the Dean’s List and Chancellor’s List each semester from spring 2014 through fall 2016, he has maintained a consistent 4.0 grade point average.

Sherbak did more than just make the grade. He truly made the most of his IU Northwest experience.

Throughout his journey at IU Northwest, he has served as president and vice president of the Anthropology Club, worked as a supplemental instruction leader and mentor, and volunteered at new student orientations. At the annual College of Arts and Sciences Honors Tea, he was inducted into Omicron Sigma Delta, a liberal arts scholastic honorary society.

Last summer, Sherbak received a unique opportunity to attend an archaeology field school through Indiana University Purdue University Indianapolis (IUPUI). While there, he did excavation work in the Central Illinois River Valley.

Rebecca Van Sessen, a visiting lecturer in anthropology, confirmed that Sherbak impressively brought an activity level that the Anthropology Club had not seen in previous terms. She added that in spite of his many responsibilities, “his ability to impress me at the academic level warrants a celebration.”

As for his plans after graduation, Sherbak is proud to announce that he recently accepted a position as a park ranger at the Indiana Dunes National Lakeshore.

“Coming from a military background, the transition to a federal job should be seamless, and I get to be outside enjoying nature,” he said. “I am excited to utilize my anthropology background in interpretive services on both prehistoric and historic cultures of the area, in addition to the unique biology and geology of our dunes.”

Sherbak has his sights set on a master’s degree in archaeology, although those plans are on hold until his wife finishes her nursing degree.

About the Class of 2017
Indiana University Northwest will confer 643 degrees at the 51st Annual Commencement ceremonies on May 11, 2017. The Class of 2017 will collectively receive 64 associate’s degrees, 532 bachelor’s degrees and 47 master’s degrees. Sixty-nine percent of this year’s graduating class are female and nearly 25 percent are over the age of 30. The most numerous degree to be granted is the Bachelor of Arts in Psychology followed by the Bachelor of Science in Nursing. The oldest and youngest graduating students are 64 and 20 years of age, respectively.