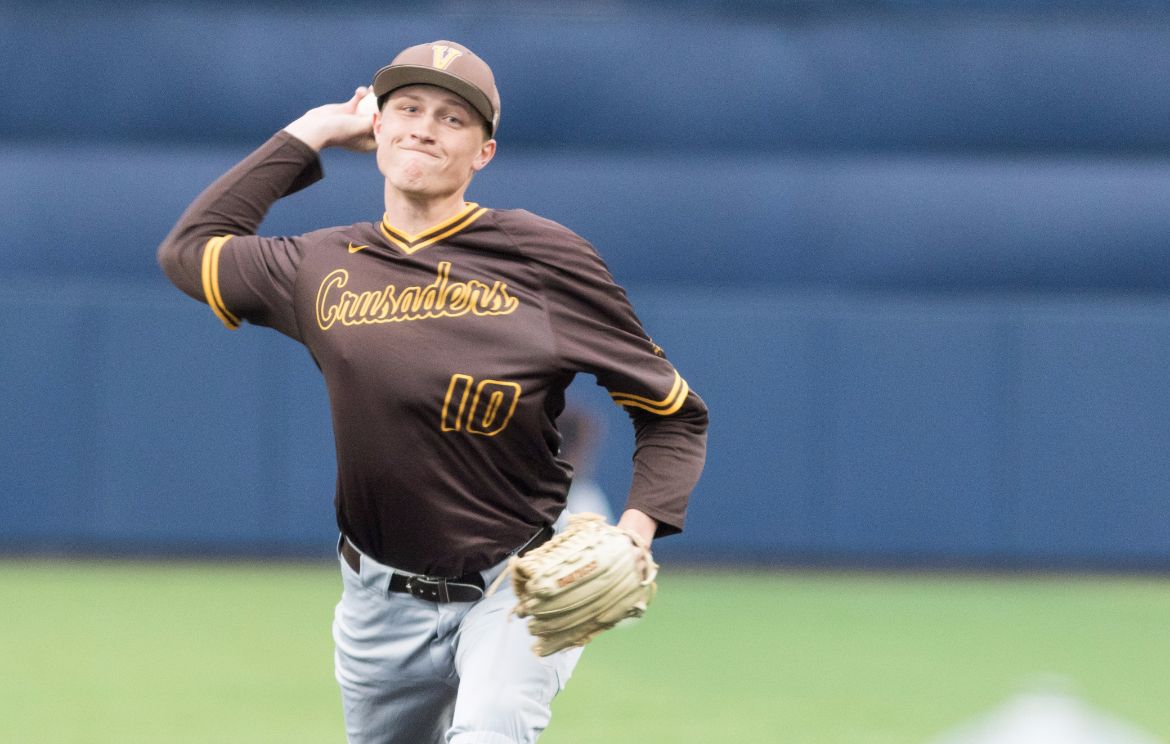 Rhodehouse Honored as Horizon League Pitcher of the Week
The stellar performance of Valpo freshman Easton Rhodehouse (Gilbert, Ariz. / Highland) was recognized by the Horizon League as the league unveiled its weekly awards on Monday.

Rhodehouse was named the Horizon League Pitcher of the Week, becoming the second Crusader to earn that honor this season. Rhodehouse entered Sunday’s game against first-place UIC in a 6-6 deadlock in the sixth. He delivered four shutout innings of relief to pick up the win for the Crusaders, who prevailed 7-6.

Rhodehouse retired all 12 batters he faced and racked up a career-high seven strikeouts. His four innings and 55 pitches marked season highs. He hadn't gone longer than two innings since a three-inning stint on Feb. 19.

The rookie righty also played a role in Saturday's doubleheader sweep at Milwaukee, nailing down his third save of the season in the 7-4 Game 2 win. Collectively, the Valpo bullpen compiled 12 2/3 scoreless innings over four games to help the Crusaders to an important winning weekend as they took three of four to secure a berth in the upcoming Horizon League Tournament.

Rhodehouse becomes just the second relief pitcher to win the Horizon League Pitcher of the Week award this season and the first since UIC’s Connor Ryan on Feb. 27. He also became the first freshman to receive the distinction this year.

Rhodehouse is the first Valpo relief pitcher to win the Horizon League Pitcher of the Week award since Karch Kowalczyk on May 6, 2013. He also is the first Crusader true freshman to win the award since Bryce Shafer on March 4, 2008. Ellis Foreman did receive the honor as a redshirt freshman in 2014.

The Crusaders will be back in action on Thursday at 3 p.m. CT to begin a three-game series with Milwaukee at Emory G. Bauer Field to conclude the regular season. Links to live audio and stats will be available on ValpoAthletics.com.

Freshman Relievers Shine in Doubleheader Split with First-Place Flames
The Valparaiso University baseball team came up on the wrong end of a 2-0 pitchers’ duel in Game 1 of Sunday’s doubleheader against first-place UIC, but the Crusaders bounced back by pulling out a 7-6 victory in a seesaw Game 2 on Sunday at Emory G. Bauer Field. After winning three of four during a difficult stretch of four games in two days in two locations, Valpo has clinched a berth in the upcoming Horizon League Tournament. Freshman Jake Larson (Irvine, Calif. / Woodbridge) kept the Crusaders in the first game with five shutout innings of relief, then classmate Easton Rhodehouse (Gilbert, Ariz. / Highland) dominated over four perfect frames to earn the win in Game 2.

Inside the Standings UIC and Wright State play each other in Dayton in a three-game series this week beginning on Thursday. The Flames only have to win one game in the series to secure the regular season title and the right to host the league tournament, while Wright State must sweep to do so. Youngstown State is locked into seventh and will miss the league tournament. If Valpo wins at least one game against Milwaukee next weekend, the Crusaders will finish no worse than fifth. The Crusaders enter the final weekend two games behind Northern Kentucky for the No. 3 seed. If Valpo sweeps Milwaukee and Northern Kentucky drops at least two of three to Oakland, Valpo would move up to the No. 3 seed. The Crusaders are currently one game ahead of Oakland for fourth, so they must also win at least the same number of games as Oakland next weekend to assure they will not be passed by the Grizzlies.

Next Up
The Crusaders will begin the final series of the regular season on Thursday against Milwaukee at Emory G. Bauer Field. The game is slated to begin at 3 p.m. CT and can be heard on 95.1 FM Valparaiso. Links to live audio and stats will be available on ValpoAthletics.com.

Crusaders Sweep Critical Doubleheader from Panthers
The Valparaiso University baseball team took a giant step toward securing its place in the upcoming Horizon League Tournament on Saturday, sweeping a doubleheader from Milwaukee at Henry Aaron Field. The Crusaders cruised to an 11-3 win in the opener before holding on for a 7-4 triumph in Game 2. Senior James Stea (Los Alamitos, Calif. / Los Alamitos) homered in both games and also tripled and drove in five in the second game. Valpo can clinch a spot in the league tournament on Sunday with either at least one victory over UIC or at least one Oakland victory over Youngstown State.

Next Up
The Crusaders will make the trip back to Valparaiso on Saturday evening and face a quick turnaround as they welcome UIC to Emory G. Bauer Field for a doubleheader on Sunday at noon CT. The games will be broadcast on 95.1 FM Valparaiso with links to live audio and stats available on ValpoAthletics.com.

Magnifico Named to All-Tournament Team
Valparaiso University freshman outfielder Gabby Magnifico (Elmhurst, Ill./York) capped off her rookie season by representing the Crusaders on the All-Tournament Team at the 2017 Horizon League Championship, as announced by the league at the tournament’s conclusion Saturday.

Magnifico registered home runs off of two of the league’s four All-League pitchers to lead the Valpo offense in tournament play. Her solo shot in the second inning of Valpo’s opener off of Oakland’s Erin Kownacki accounted for the lone run in a 1-0 victory for the Crusaders. Magnifico then connected for a two-run shot off of Youngstown State’s Maddi Lusk on Thursday to give Valpo an early 2-0 lead in that contest.

Magnifico closed out her freshman year tied for second on the team with six home runs. She also tied for third on the year with 24 runs scored, while with three RBIs in the league tournament, Magnifico bumped her season total to 16 driven in.

Softball Closes Season at Horizon League Championship
The Valparaiso University softball team saw its 2017 season come to an end on Friday afternoon at the Horizon League Championship, as the Crusaders finished the tournament in fourth place with an 8-0 loss to Detroit Mercy. Valpo ended the season with 28 wins – its highest win total since 2013 – and senior Sam Stewart (Frankfort, Ill./Lincoln-Way East) finished out her final year with four program single-season records.

Closing Out the Season

Saying Goodbye to the Seniors

Thoughts From Head Coach Kate Stake
“Jorgi and Sam will be missed. They came into their own this year – as competitors, as teammates and as people. It’s been a privilege to coach them.”

“This year’s team was special. They embodied our ‘with it or on it’ ethos. They played selflessly. They celebrated each other’s success and picked each other up in defeat. And while this particular group won’t end their season with a ring, the successes that we found throughout the season – on the field and off – have made this a special year.”

The match started favorably for the Crusaders as the No. 1 doubles team of Jeffrey Schorsch (Perrysburg, Ohio / Perrysburg) and Charlie Emhardt (Carmel, Ind. / Carmel) picked up a 6-2 win over Jathan Malik and Connor Johnston. The Crusaders cruised to the victory in a battle of two nationally-ranked doubles tandems. Emhardt and Schorsch entered the match at No. 41 in the nation, while Johnston and Malik stood at No. 29 nationally.

It’s not the end of the road for the senior duo as Schorsch and Emhardt have earned a spot in the 2017 NCAA Men’s Doubles Championships, one of 32 doubles teams in the field. The doubles competition will be conducted May 24-29 at Dan Magill Tennis Complex in Athens, Georgia.

The first singles match to finish was No. 2, as Kissell fell to Alex Knight 6-2, 6-2. Kissell finished his sophomore campaign at 22-11, 15-8 in dual matches. Kissell is expected to be Valpo’s top returning player for the 2017-18 season. Knight is ranked No. 86 nationally.

Ancona lost his match in straight sets to Carter Lin 6-2, 6-4 at No. 6 singles. The Valpo freshman finished the season at 23-11, 16-6 in dual play. He is expected to return as a centerpiece of Valpo’s team next season.

That put the Crusaders in a precarious position, needing to win all four remaining singles matches to advance to the second round of the tournament. The Crusaders still had a pulse, as the four remaining matches all went to a third set.

The clinching match came at No. 4 singles, as Runhao Hua nailed down a 3-6, 6-0, 6-3 win over Bacalla. That ended Bacalla’s illustrious Crusader career as he finished with a 19-13 overall record and 12-8 dual mark in his senior season. He went 21-6 in doubles this year.

Bacalla, an all-league second team honoree his freshman year and a first-team selection as a sophomore, finished with 82 career singles wins and 75 doubles victories, both ranking in the top four in program history.

The other Crusader to take the court as a collegiate player for the final time on Friday was Dunn, who saw his match go unfinished at No. 5 singles, trailing 3-6, 6-4, 3-1. Dunn lost only two league singles matches in his four-year career and finished with 92 career singles victories. He went 27-7 and 19-3 in dual matches as a senior.

Schorsch was leading No. 72 Jathan Malik at No. 1 singles when the match was halted. He dropped the first set 3-6, but had come back with a 6-4 win in Set 2 and owned a 5-4 lead in the decisive set. Emhardt and Myles Schalet were even at No. 3 singles 2-6, 6-3, 3-3 when play was halted due to the clinch-clinch format of all postseason matches.

The Crusaders finish the season at 23-4 overall, setting the school record for victories in a single season for the fourth straight year.

Softball Falls to Youngstown State Thursday
The road to defending the Horizon League crown got a bit more challenging for the Valparaiso University softball team on Thursday, as the third-seeded Crusaders were dealt a 9-2 defeat by second-seeded Youngstown State. Valpo now has to win twice on Friday to reach Championship Saturday.

Next Up
The Crusaders (28-22) will have to win twice on Friday and twice on Saturday to claim the tournament title, a road which begins with a matchup against fifth-seeded Detroit Mercy on Friday afternoon at noon. The game can be seen live on ESPN3, WatchESPN and the ESPN app, with links for the live video and live stats available via ValpoAthletics.com.