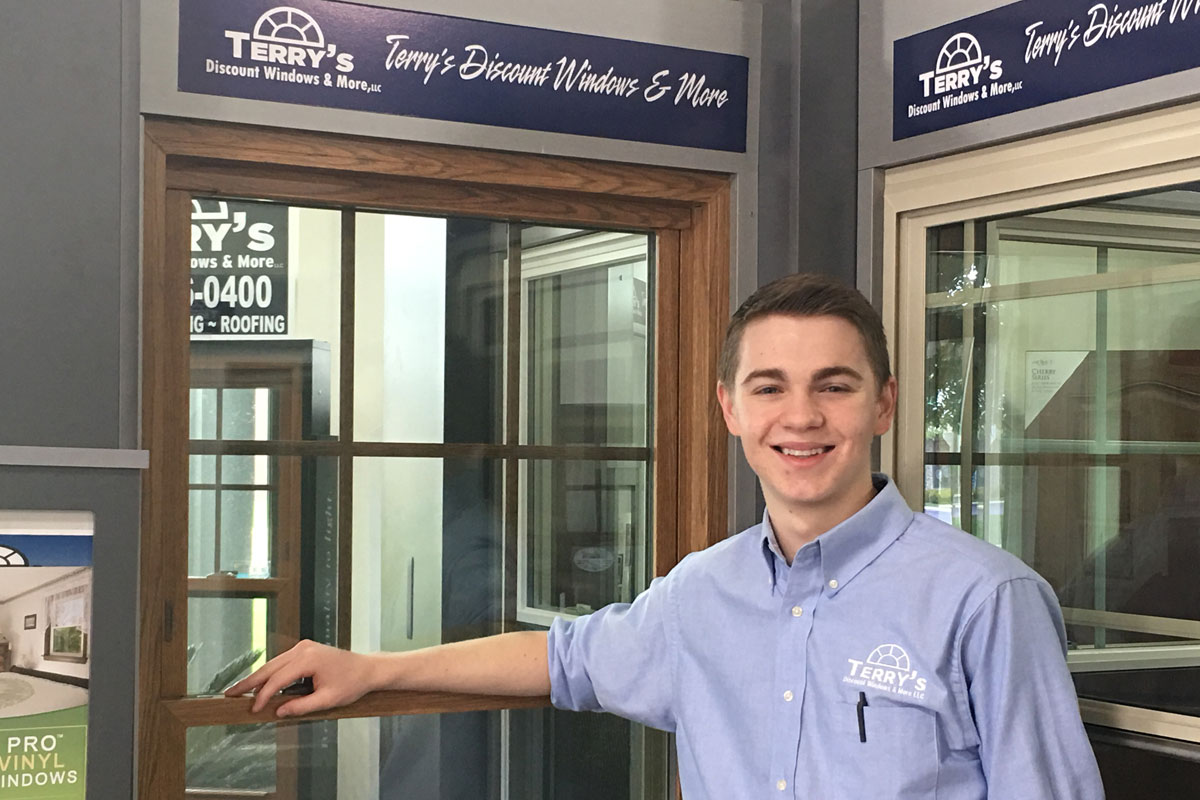 “He never took ‘No’ for an answer,” Terry said. “We knew he would be great because he never accepts the word ‘No.’

Now Caleb uses that energy, creativity, and persistency while finding a way to help homeowners purchase their custom windows and siding that will meet their personal expectations.

Though Caleb is very loyal to his customers and only wants the best for all the families he meets with, his motto of “No is not an option” is not meant to push them into something they do not want nor need. That motto serves as the determination to make sure his clients only receive the very best product and service that they deserve.

Caleb is the youngest child of Terry and Julie Keelen of Terry’s Discount Windows & More and has now taken over the sales department as the Sales Manager for the company. He has broken every sale record the store had for their weekly, monthly, and best quarter: all since January 1, 2017, which was his first day as a full-time salesman. He befriends the customers, follows through with all documents post-sale, and plans on taking over the family business down the road. Oh, and he is 19-years-old.

Caleb attended the small, private school in Valparaiso called Victory Christian Academy and then enrolled at Purdue Northwest. However, he retired after one semester.

“It just wasn’t for me,” he said. “I started working here full-time and I like it. It fits.”

Caleb started at the bottom and has worked his way up throughout the family-owned company that was opened in Valparaiso in 2003.

“I like that I have been able to work my way up through the business. I started sweeping the floors in the storeroom and then have done a little bit more and a little bit more,” he said. “It was never handed to me, so it is nice that I had to work for it.”

In January, the plan was to have Caleb get to know the ins and outs of every department within Terry’s, but later that month the sales manager had to move back to Indy for personal reasons.

“He was going to start selling and slowly wean in but we were desperate,” Terry said. “We had so many appointments and we are growing leaps and bounds every year, that we had to tell him, ‘Hey we are just going to have to throw you into the lions den.’”

“Which I had been asking to do for the last two years!” Caleb added in, laughing.

He knew he was ready, and it was finally time to prove it.

According to Terry, and to the regional window rep the company works with, Caleb’s sales abilities are exceptional, and better than anyone they have ever seen. And that is not just a parent doting on their child.

“I think I am so successful because, and many other sales people probably don’t do this, but I pray and ask favor from the Lord before every appointment,” Caleb said. “I know that God has favor over my life and then after I usually text my girlfriend on how it went.”

And he added simply, “I just like making friends and talking to people.”

Caleb travels to several residential homes throughout the area for appointments, where he measures for windows, siding, doors and other products. Then, he gets the estimate costs and while people are deciding to say ‘Yes’ or ‘No’ Caleb is making sure they are comfortable with him and the sale, helping them figure out how to fit this cost into their budget, and having fun.

“People see his passion. He knows there is no better company and people see that in him,” Terry said.

Caleb is the youngest in the Keelen family, with an older sister who is married and a brother who just graduated from nursing school and getting married in September.

It is a close family, and Caleb enjoys working with his parents each day. The fun environment is full of teasing and inside jokes. The Terry’s Discount Windows family includes the general manager who has been with the company for the last eight years, an executive assistant, office manager, warehouse/service manager, a sales team and multiple crews of certified installers.

“I like it, working here and with them overall,” Caleb said. “They are a little hard on me too, of course, but I do like it. You don’t know how to explain it, working with your parents, unless you do it. We have fun and we have a really good team.”

Caleb ends each appointment and every day talking with his girlfriend and when he has free time, he is hanging out with her, friends, and family.

He is very involved with his church and enjoys videography, photography, playing his guitar and music.

Heading into a house, preparing to make the next sale on a window replacement, Caleb is not thinking about the records, the money, or his next appointment after this.

Every customer is like talking to a good friend he hasn’t seen in a while.

When he knocks on your door, sit back and have fun, Terry said, because “You’re in for a treat.”