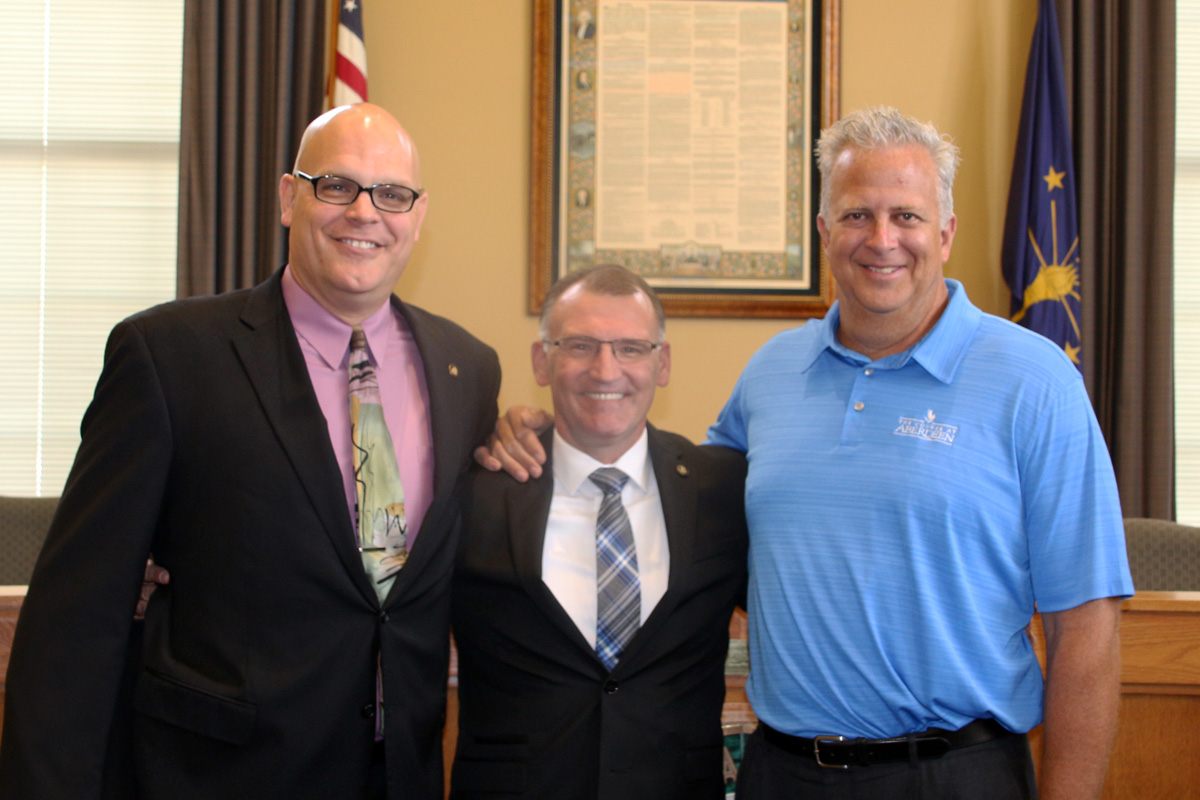 Early Monday morning at City Hall, the City of Valparaiso welcomed new leadership for its police department as Officer Jeff Balon and Officer Mike DeHaven were sworn in by Mayor Jon Costas as Police Chief and Assistant Police Chief.

“We are celebrating and ushering in a new era of leadership that will continue the trajectory of progress and pride in our departments,” said Mayor Costas on the momentous occasion. “Our leaders are not only ready, but they are really quite eager to take over.”

Both men have extensive experience serving the community of Valparaiso and working in leadership roles and being involved in the community.

Jeff Balon is a 25-year veteran of the Valparaiso Police Department and was most recently the Captain of Investigations and has worked both on patrol and in the role of detective. Balon has also served in a major capacity in the realm of safety as a member of the Northwest Indiana Major Crimes Task Force from 2006-2015, where he was an Assistant Commander. In addition, he is also a crisis negotiator for the Porter County SWAT team.

“It’s been a privilege to serve all of you, as your chief that’s my job, serve you and to serve the citizens and make this department even better,” said Balon enthusiastically upon being sworn in as Valparaiso’s new Police Chief.

“I’m looking forward to progression and building off what we’ve already accomplished. It’s always very important to try and bridge any divide we might have. Partner with the community, only with community involvement and police coming together can we make this community even stronger and safer; that’s my prime objective,” said Balon of what he sees as his goal going forward in this transition.

When he says the community is key to good policing, Balon really means it, as a lifelong resident and someone involved in his community.

“I’ve been here my entire life, what I love about it is the community and sense of belonging, there has been a lot of growth as well. Seeing that growth and feeling that sense of belonging and community is really what makes Valparaiso what it is,” said Balon.

Mike DeHaven also has over two decades experience with the department, serving for the past 21 years and having been Captain of Patrol for the last ten of those. He has managed a 40-member division and supervised the department’s field training program as well as handling logistics for the city’s special events. DeHaven has also earned the department’s Officer of the Year Award and Supervisor of the Year Award and gives back to the community as a coach and through speaking to teen groups.

“I’m very honored, I never thought I’d be in this position 21 years ago when I started,” DeHaven said after being sworn in as Assistant Police Chief.

Like Balon, DeHaven is enthusiastic about getting into the new role and optimistic about building on the success of previous Police Chief, Mike Brickner.

“I’m looking forward to getting the officers what they need, in my position that’s exactly what that’s supposed to be about. Anything I can take off of Chief Balon’s plate and help with as well as giving aide to the two captains, that’s what I’m all about,” said DeHaven on moving into his new role.

“It’s a great community, it’s exciting, there will always be challenges but we collaborate and we work it out,” said DeHaven who shares Balon’s enthusiasm about being active in the community and involving them in effective policing.