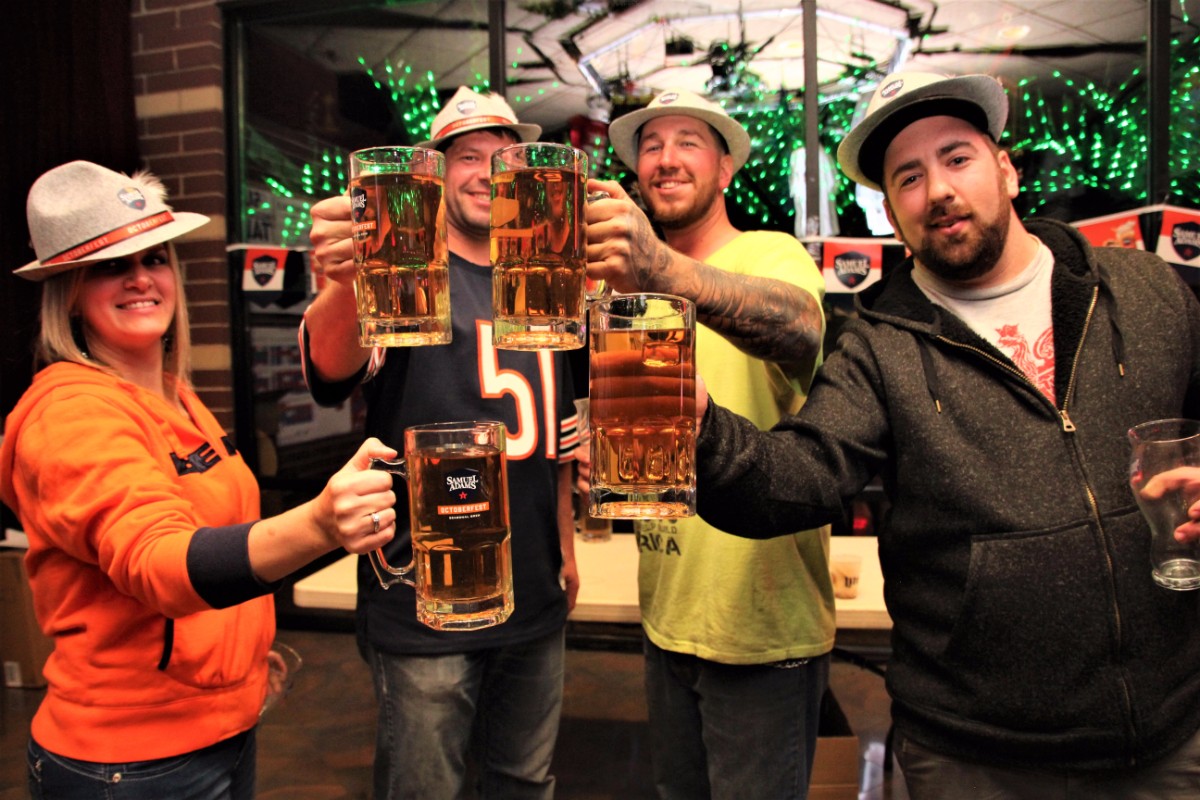 Arm shaking, face scrunched up, teeth gritted. While holding a brew is usually casual faire, Samuel Adam’s Stein Hoisting Competition takes it to another level, and Indiana Beverage is bringing the tradition to bars across Northwest Indiana.

Facilitating the national Samuel Adams competition, the staff at Indiana Beverage hosted a stein hoisting competition at Buddy and Pals in Crown Point on Thursday night. Contestants are to hold a full beer stein, weighing in at five pounds, with their arms straight in front of them for as long as they can.

Perez has been working with the beer stein competition for 10 years. After the regional competitions are completed, a national competition is held in Boston on October 27th for the finalist in each state. From there, the winner has the chance to be featured in Sports Illustrated as “Stein Hoister of the Year.”

“At first a lot of people don’t know what stein hoisting is,” Patrick Rickman, Indiana Beverage sales consultant, said. “But when we start talking about the history of the competition, along with the rich history of Octoberfest beer, they get intrigued. People really engage with this, you have a bunch of people cheering and people come off the sidewalk to see what’s going on.”

The competition is in celebration of Oktoberfest which begins on September 18th and lasts for two weeks. Patrons at Buddy and Pal’s also had a chance to sample Samuel Adams’ seasonal brew, “Octoberfest.”

“Stein hoisting is also an old tradition,” Perez said. “It began as a manly, macho competition in Germany.”

However, women have an equal shot at the number one spot. Perez said he has seen some impressive female stein hoisters in his time, holding for up to 10 minutes.

Nicole Barnett, sales promoter at Indiana Beverage, donned a traditional German barmaid outfit for the occasion, adding to the festivities. She said events like these are a big hit for Indiana Beverage and its customers.

“It’s fun, a lot of bars see this and they want this brought to their lounge,” Barnett said. “It’s a great way to get people together, and bars want that.”

Will Panshyn of Crown Point held his stein for 3 minutes and 30 seconds, winning his round against three other contestants.

“I’ve had practice holding things,” Panshyn said. “I have a newborn at home.”

Corey Henson of Crown Point tried his hand at it for the first time and came in second to Panshyn.

“It was tough,” Henson said. “I thought it’d be easier. I worked muscles I didn’t even know I had.”

The winner of the night was Mike Novak of Hobart, who hoisted his stein for 4 minutes and 12 seconds.

“I thought I could go a little longer, but I was starting to really feel it” Novak said.

The next competition is on October 5th at 8 p.m. at the Bullpen Luxury Bar and Grill. Later competitions include October 10th at the Valparaiso Elks Lodge and on October 13th at Ameristar Hotel and Casino, both times to be announced. Those interested can follow “219 Beer” on Facebook for more announcements, or visit samueladams.com for more information.

“It doesn’t matter if you hold it for one minute or five minutes,” Rickman said. “It’s all about having fun.”