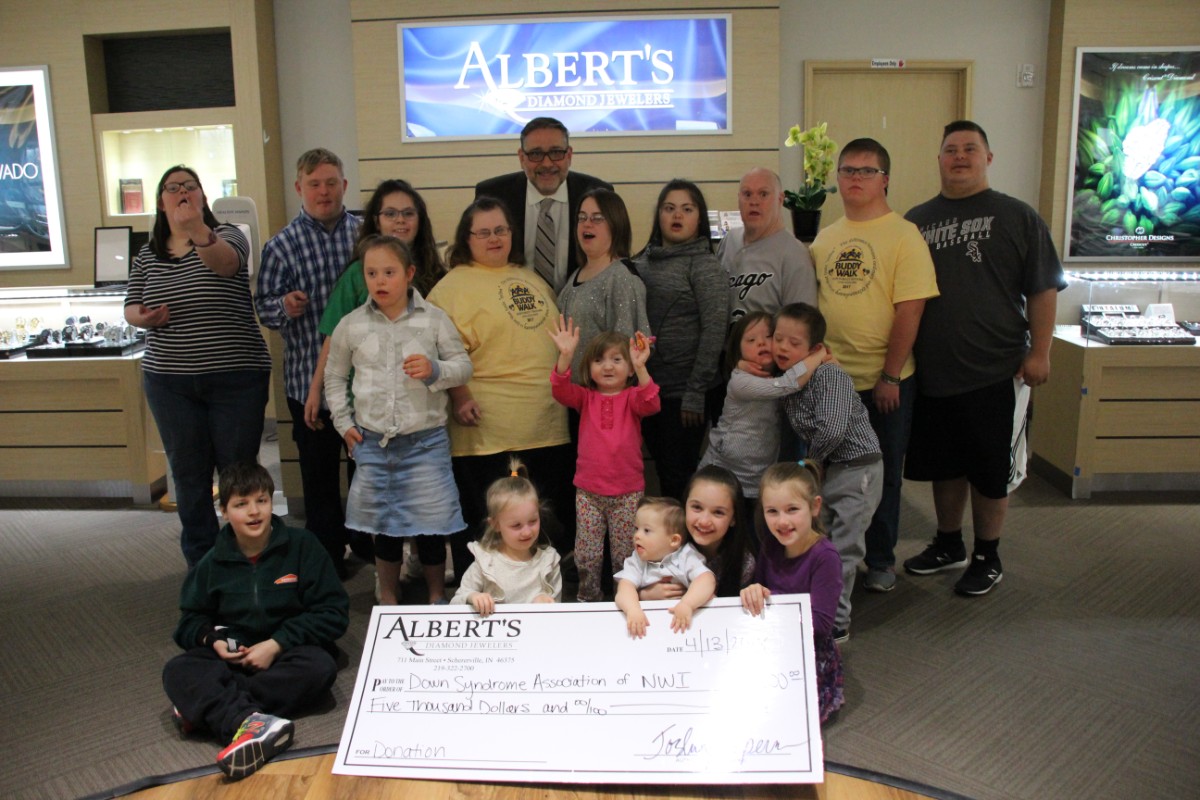 Though the atmosphere shone with its usual promise of the finer things, Albert’s Diamond Jewelers showcased more than just jewelry on April 13th. The Albert’s staff opened their doors to members of the Down Syndrome Association of Northwest Indiana and Chicagoland to present them with a gift of $5,000. All those in attendance were treated to candy, cookies, and plenty of fun camaraderie.

Joshua Halpern, President of Albert’s Diamond Jewelers, is no stranger to charity.

“Every year, I try to pick and choose an organization to make a nice contribution to,” Halpern said.

Albert’s Diamond Jewelers always makes one big donation a year toward multiple sclerosis research, which has a special significance as Halpern’s mother suffers from MS. However, Halpern likes to make similar contributions to other organizations with a worthy cause, such as the Down Syndrome Association of Northwest Indiana and Chicagoland, founded in 1983.

Halpern has a connection to the Down Syndrome Association—a friend by the name of Bill Buckley, who serves as President of the organization.

“It’s been a lot of work,” Bill Buckley said. “When we first started, when Addison was born, it was more of what I would call a social group, or a support group. By the time she was 3 or 4, we were a part of the board, and we’ve gone from there.”

The two have progressed far: Bill, as mentioned, is now President of the association, and Dawn acts as executive director.

“We’ve really worked to change, first, the image of the organization to be more of an actual organization—one that’s there for support, not only for parents and their kids, but support at the educational level, and for the inclusiveness of the community as well. It’s a long road, but we’ve finally gotten there,” Bill said.

Since helping to take the reins, the Buckleys have helped develop the Down Syndrome Associaton of Northwest Indiana and Chicagoland into a cornerstone of the special needs community.

“Our mission is to improve the quality of life for those with special needs,” Bill said. “To feed that mission, we focus on three pillars really, which are education, inclusion, and community itself.”

Two years ago, the Down Syndrome Association of Northwest Indiana and Chicagoland was housed in an 800 square-foot office front. With the help of 83 companies, including Albert’s, the association was able to move into a 5,000 square-foot facility in Highland owned by Milestone Therapy. The therapy company is housed upstairs in the same building, making for an excellent synergy, in Bill’s own words.

“Now we have nine programs and 14 different events we do every year,” Bill said. “Our educational program is probably our largest area; the curriculum is decided by certified teachers. We also have a lot of volunteers.”

Dawn chimed in, “And therapists. We have occupational therapy, physical therapy, and speech therapy. We offer free math and reading tutoring, and a cooking program. We service 523 families in Northwest Indiana and Chicagoland, and we’re growing every week.”

The Down Syndrome Association of Northwest Indiana and Chicagoland is a private organization, in terms of its fundraising efforts: no national entity funds its operation, meaning it relies solely on fundraising and the occasional grant.

“Each year, we have to raise approximately $200,000,” Bill said. “So events like the one Albert’s is having for us tonight—that’s big for us. It’s a very generous donation.”

At one point, Halpern spread his arms out, as if to encompass the liveliness around him.

“Look around the room—look at all these beautiful people here!” Halpern said. “This is a great cause, and I’m just excited I’m able to support them. It’s wonderful. It makes me happy.”

Halpern’s wasn’t the only happy face. Members of the organization and the Albert’s staff could not stop smiling and sharing stories. When it came to the check presentation, the group laughingly replaced the photo-taking catchphrase, “Cheese!” with Albert’s Diamond Jeweler’s own catchphrase—“See you at Albert’s!”

Addison Buckley is turning 10 on May 31. While she’s looking forward to all the ice cream that day, she had to admit that the party at Albert’s was pretty sweet.