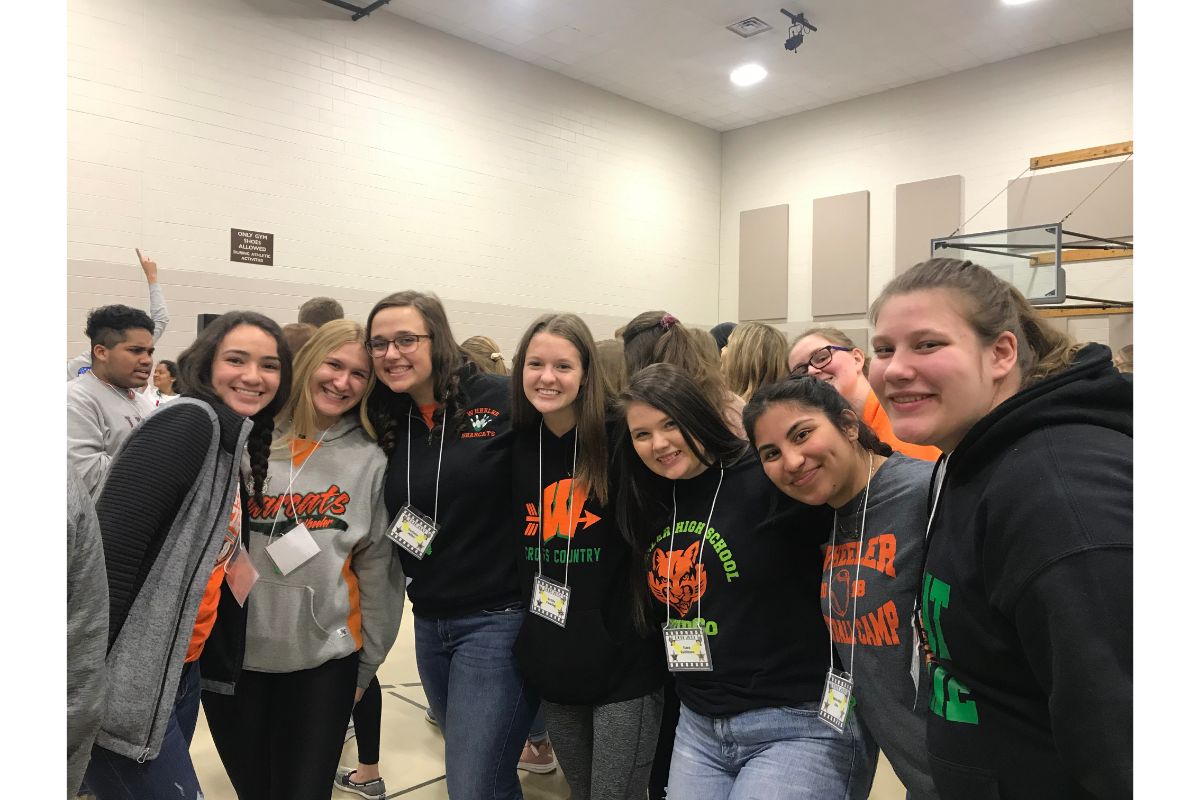 PCLC is an annual event that brings together student council members from across Porter County. Each school sends one or two members to begin planning the conference at the beginning of the year. The small group meets throughout the school year to plan the theme and activities.

The goal of the event is to teach students important skills they can take with them to their schools and use throughout their lives. Students are also able to collaborate and share ideas with other student councils.

Once students arrived, they were given name tags and placed into smaller groups filled with students from other councils. The conference started with fun songs and games to wake everyone up.

To begin, speaker Ted Wiese talked to the students about positive mindsets and leadership skills each individual must obtain to become a great leader. He explained the small details that can make a big difference and the importance of team work in different environments.

After the speaker, the students broke off into their smaller groups to participate in activities that emphasized teamwork and communication. In the afternoon, everyone came back together. To end the event, students wore compliment cards on their backs, and everyone went around the gym and wrote anonymous, positive messages on others cards.

As the end of the school year approaches and we enter the spring season, prom season is in full bloom.

The junior class at Wheeler High School has been working hard all year long to have the best prom yet. They’ve hosted fundraisers since their freshman year to make sure they have enough money to work with.

In the past, dinner and the dance have taken at Avalon Manor in Merrillville. However, the prom committee decided to change the venue this year.

This year’s prom, themed “Once Upon a Prom,” will take place at Duneland Falls Banquet Center in Chesterton on April 26. The committee is so excited for everyone to see the beautiful venue and the work they’ve put in to making the night memorable.

Prior to the dance, there will be a grand march in Wheeler’s auditorium. Any prom attendee is able to walk across the stage to show off their prom look. Everyone loves to see each other fancied up.

At the grand march, the prom prince, princess, king, and queen will also be announced. The courts were nominated by staff members at Wheeler, and students will vote for the titles.

Junior class sponsor Leslie Lareau couldn’t be more excited for prom. Just like everyone else, she loves to see all of the students dressed up. However, she is eager for everyone to see the hard work the junior class has put into the event.

Students can pay for their prom tickets and request their table assignments online.

Leslie Lareau has been keeping herself busy both inside and outside of the classroom this school year. Lareau teaches art classes, such as Intro to 2D Art, ceramics, and digital design, at WHS. She also coaches the fine arts academic team and is the junior class sponsor.

Lareau attended Ball State University and originally planned to receive a degree in Graphic Design. However, she decided to pursue a career in education because she had a love for coaching alongside her love for art. Lareau received a Bachelor of Science degree in Visual Arts Education and began teaching at WHS in 2008.

Art has always been an important part of Lareau’s life. She feels it helped her express herself as a child, but also taught her important life lessons.

“When you have a specific vision for how you want your artwork to look, and it’s not working out, you have to figure out what is going to work,” Lareau said. “I like that Art is forgiving and a great teacher throughout the process.”

Lareau loves being able to keep art in her students’ lives because it allows them to be creative and express themselves.

She said, “I believe that art is important for students because it allows for self-expression and a more creative outlet and method of problem solving.”

In her free time, Lareau enjoys staying active and busy. She attends weekly dance classes, judges gymnastics competitions, and does freelance custom apparel. Alongside that, Lareau enjoys relaxing with her husband, Eddie, and her dog, Baloo.

Junior Anna Vettickal is constantly on the go. Vettickal is involved in basketball, volleyball, student council, National Honor Society, prom committee, and is the junior class president at Wheeler.

Being involved at WHS has given Vettickal many opportunities. She is able to collaborate with her peers, plus gain knowledge and experience.

While Vettickal has been in high school, she has helped with multiple events such as fish fries, homecoming planning, prom planning, teacher appreciation, and other volunteer positions.

Being a part of the prom committee has been exciting for Vettickal. She can’t wait to see everyone’s reactions to what the committee has worked to put on for students attending this year’s prom.

“The prom committee has worked really hard to create a beautiful prom that I think everyone will love,” Vettickal said.

Vettickal has been a Wheeler Bearcat since she was in kindergarten.

“I love how we have all gotten to know each other over the past few years,” Vettickal said. “I love that we are all able to build relationships with one another.”

In any free time she finds, Vettickal enjoys hanging out with her friends and finding new places to go to.